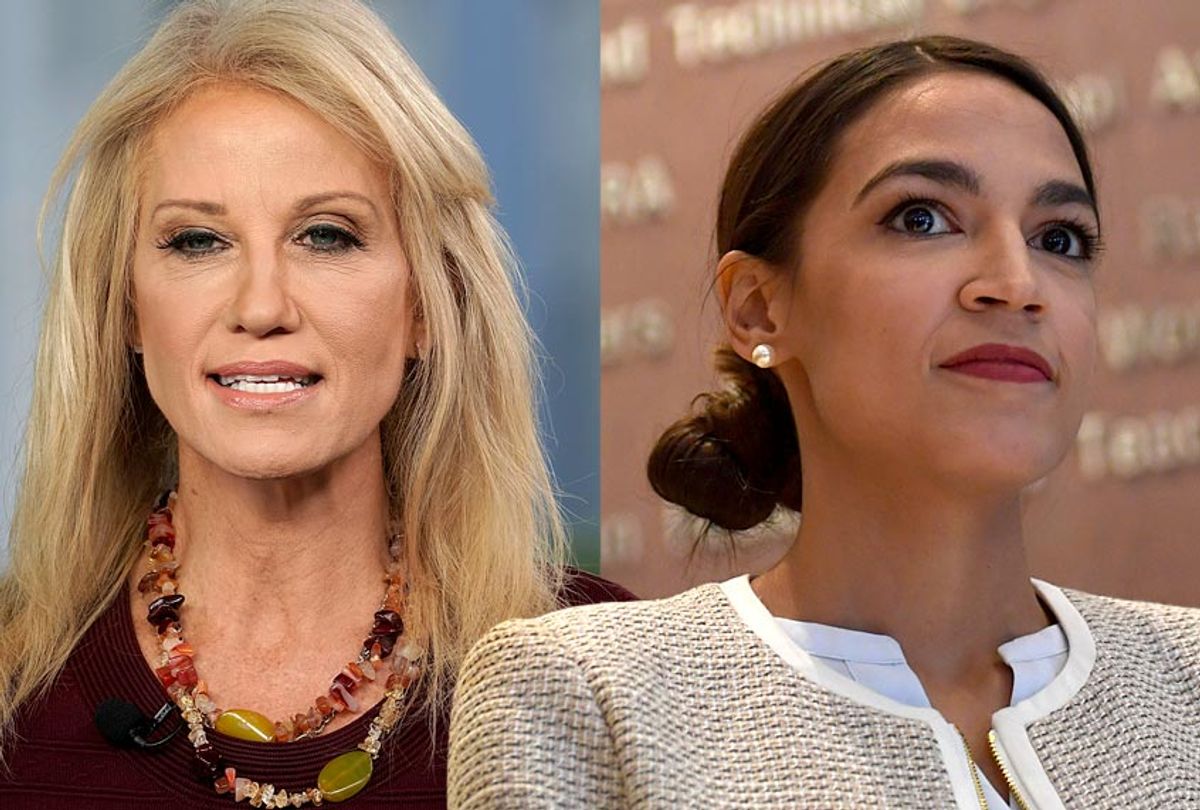 White House counselor Kellyanne Conway criticized Representative-elect Alexandria Ocasio-Cortez on Fox News, dismissing her on Tuesday as "a 29-year-old congresswoman who doesn't seem to know much about anything."

The rebuke, made while defending President Donald Trump's outgoing Chief-of-Staff John Kelly one day after Ocasio-Cortez accused him of "cowardice," is the latest dig by a top conservative against the self-described Democratic socialist, who has emerged as a target of conservative snark even before being sworn in to office.

"This country owes him a debt of gratitude," Conway said Tuesday on Fox, referring to Kelly, a retired four-star Marine Corps general who served in Iraq. "Not the nonsense that has been spewed about him even recently from the left and from this 29-year-old congresswoman who doesn't seem to know much about anything when you ask her basic concepts about the economy, the Middle East, military funding — really embarrassing."

Ocasio-Cortez provoked some outrage over the summer when she described Israel's presence in areas of the region as an "occupation," later admitting that she is not an "expert on geopolitics on this issue." Her office declined to respond to Salon's request for comment about Conway's remarks on Tuesday afternoon.

Trump announced on Saturday that Kelly would be leaving his role as chief of staff at the end of the year.
Ocasio-Cortez's "cowardice" comment came after Rep. Barbara Lee (D-Calif.) on Monday wrote that Kelly owed Rep. Frederica Wilson (D-Fla.) "a long overdue apology." In October 2017, Kelly called Wilson an "empty barrel" in an attempt to squash a controversy surrounding Trump's condolence call to the widow of a fallen U.S. soldier.

Ocasio-Cortez agreed with Lee in a post on Twitter, writing on Monday that Kelly "was straight up exposed for lying about @RepWilson in comments aimed a discrediting her." "He absolutely owes her an apology, and his refusal to do so isn't a sign of strength — it's cowardice," Ocasio-Cortez said.

Ocasio-Cortez's tweet appeared to be on Conway's mind during her appearance on "America's Newsroom with Bill Hemmer." Conway, without naming Ocasio-Cortez, said she considered the criticism of Kelly a "slur" on Tuesday. "For her to even use a slur against him yesterday — and I won't repeat her name or the slur, but let me stand up for Gen. John Kelly," she said. "He's done a magnificent job for this country for almost 50 years, and that includes here at the White House as our chief of staff for about a year and a half."