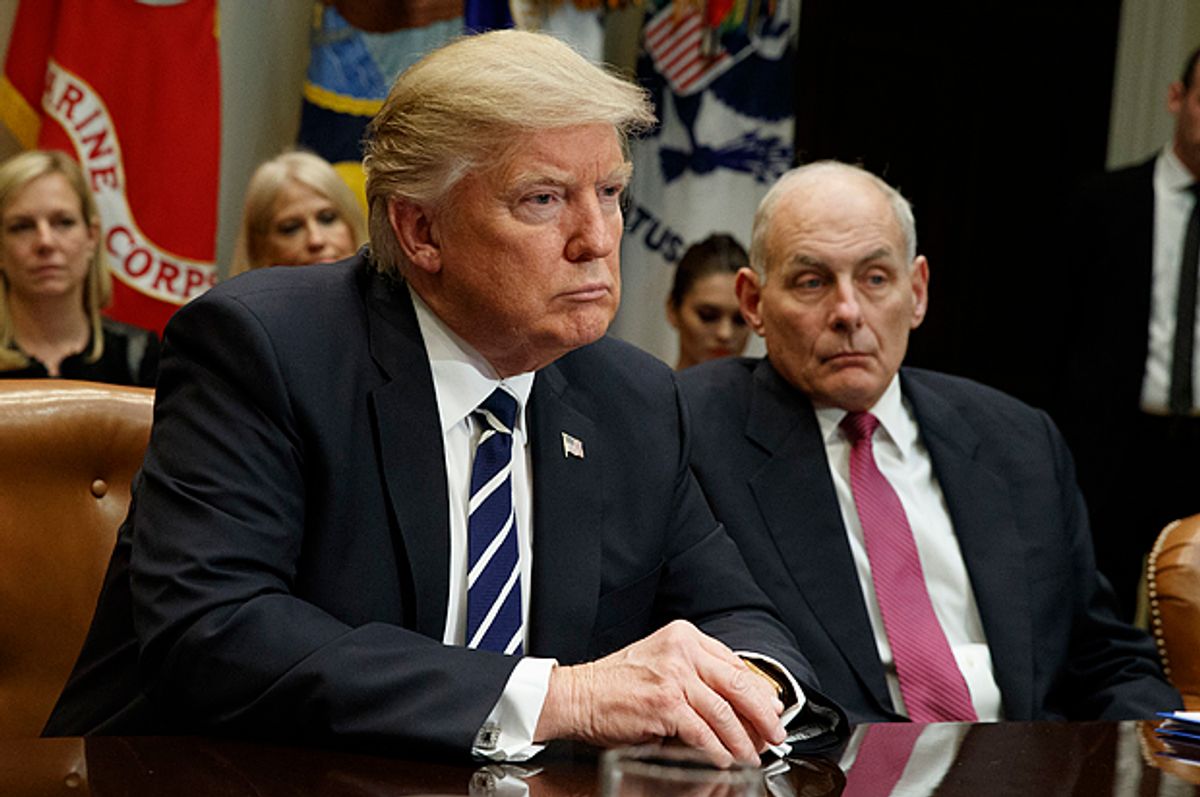 John Kelly, the chief of staff to President Donald Trump, is expected to exit 1600 Pennsylvania Avenue in the coming days in the wake of reports that the pair are no longer speaking to one another.

The news, which was first reported by Axios, comes on the heels of an exclusive report from CNN revealed that Trump's top White House aide had participated in recent months in an interview with investigators from special counsel Robert Mueller's ongoing probe into alleged collusion between the president's 2016 campaign and Russia. If accurate, that would make Kelly the highest-ranking Trump administration official to have done so. CNN's Dana Bash elaborates:

Kelly responded to a narrow set of questions from special counsel investigators after White House lawyers initially objected to Mueller's request to do the interview earlier this summer, the sources said.
. . . The Mueller questions to Kelly centered on a narrow set of issues in the investigation of potential obstruction of justice, chiefly Kelly's recollection of an episode that took place after new reporting emerged about how the President had tried to fire Mueller. The President was angry at then-White House counsel Don McGahn about what had been reported by The New York Times. McGahn had refused to publicly deny the reporting. The special counsel wanted to try to corroborate McGahn's version of events.

According to the Wall Street Journal, the president's daughter and son and law, Ivanka Trump and Jared Kushner, who both serve as top administration officials, have lobbied for the commander-in-chief to backfill the top White House post with Nick Ayers, who currently serves as chief of staff to Vice President Mike Pence. The staffing coup, in turn, follows reports that Trump is mulling yanking Pence's name as his running mate from the 2020 GOP ticket.

As recently as Thursday night, Trump reportedly instructed an associate to "stop calling John [Kelly] for anything. Call Nick. He’s my guy."

Ayers' onboarding could potentially spur further staffing departures at 1600 Pennsylvania Avenue, as the longtime GOP operative is considered to be a "polarizing figure within the West Wing," according to the Journal. Among his critics is Secretary of State Mike Pompeo, who has reportedly called into question his foreign policy prowess.

Kelly, the retired four-star Marine general who replaced Trump's first chief of staff, the former RNC Chairman Reince Priebus, was said to have been tapped to bring a sense of order to a White House mired by staff infighting and power struggles with his military experience. That never occurred and "many of the storms in which Kelly became embroiled were by his own making," according to CNN.

News of Kelly's imminent departure comes on the same day that Trump confirmed his picks to fill top Cabinet posts, announcing that he would nominate William Barr to be his next attorney general and Heather Nauert to be his next ambassador to the United Nations.

If confirmed for a second gig as attorney general, Barr could soon oversee special counsel Robert Mueller's investigation into the alleged collusion between Trump's 2016 campaign and Russia. Barr, who worked at the CIA during the 1970s, previously served as attorney general to the late former President George H. W. Bush from 1991 to 1993. At the time, he was also Mueller's boss while the future special counsel was heading the Department of Justice's criminal division.