95 percent of the Arctic Ocean’s old sea ice is gone. What now?

Unlike the ice cubes in your fridge, the Arctic Ocean is not just going freeze up again next winter. Now what? 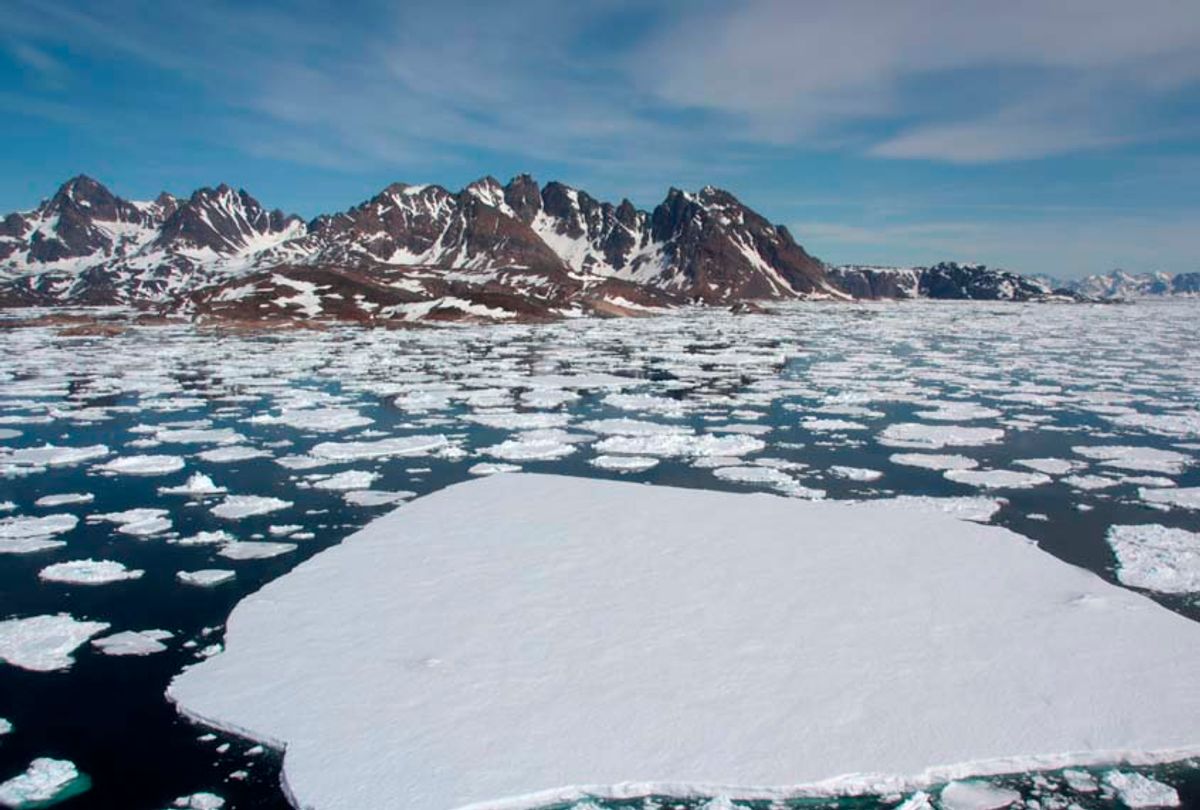 Sea ice in the Arctic Ocean can be compared to ice cubes in a glass of water. As the ice melts, it does not directly change the water level in your glass because the ice was already there — but at some point, it ceases to keep the glass cold.

When it comes to planet Earth, sea ice in the Arctic Ocean is similar: it absorbs heat without causing big increases to the ocean’s temperature, though its melting won't increase sea levels. It also reflects solar radiation back into space, something known as the ice albedo effect. Now, as the National Oceanic and Atmospheric Administration’s (NOAA) annual Arctic Report Card notes that only five percent of the Arctic Ocean’s old sea ice remains, much of that layer of protection is disappearing — leaving many climatologists and experts concerned for what’s next.

“Once the sea ice is gone you put heat in there, and you raise the temperature of the remaining seawater much faster... there’s no place to go, but to heat things up more,” Leslie Field, PhD, founder and CEO of Ice911, and lecturer at Stanford University, told Salon. “It is an interesting, [t]otally alarming [thing] when you are raising the temperature of the ocean faster.”

NOAA’s latest report showed, among other disconcerting findings, that the oldest and thickest ice in the Arctic has declined by 95 percent over the past three decades. It is one of a handful reports from various agencies over the last couple months sounding the alarm regarding climate change.

“In 2018, old ice constituted less than 1% of the ice pack, meaning that very old Arctic ice has declined by 95% in the last 33 years,” the report states. “The pace and extent of the changes to summer sea ice cover, along with regional air temperatures and advection of waters from the Pacific and Atlantic oceans, are linked to the spatial patterns of late summer sea surface temperature.”

Melting sea ice can lead to melting continental glaciers, called ice sheets, and melting permafrost. The melting of permafrost would lead to methane leaks, Field explained, an even more potent greenhouse gas, which would cause further warming. It is a positive feedback loop that does not paint a positive future for Earth.

“It’s not like Vegas," Walt Meier, a Senior Research Scientist at the National Snow and Ice Data Center, explained to Salon. “What happens in the Arctic doesn’t stay in the Arctic." Meier says the pace at which sea ice is melting in the Arctic Ocean will certainly impact the rest of the world.

As many reports have pointed out, Earth appears to be on track to have an ice-free Arctic summer.

“It’s gone from something that we once thought our grandkids might see in their lifetime to something that many people will see in their lifetime... it will likely come much sooner,” Meier said. “There is a lot of uncertainty around when, but it seems likely it will sooner rather than later,” he continued, adding that this apocalyptic scenario could happen in 2040 at the earliest.

Meier said an ice-free Arctic summer is “a symbolic threshold,” but it is telling that climate change consequences once relegated to the far future are happening decades sooner than predicted. Meier said he found it particularly unusual that the report found a shortage of ice in the Bering Sea.

“One of the more remarkable features of Arctic sea ice in 2018 was the dearth of ice in the Bering Sea, which was at a record low extent for virtually the entire 2017/18 ice season,” the report stated. “The reduced sea ice coverage and early break-up of ice had a profound effect on ocean primary productivity in 2018, particularly in the Bering Sea region where productivity levels were sometimes 500% higher than normal levels.”

Warming Arctic Ocean conditions are being associated with an increase in harmful algae species that have been responsible for toxic algal blooms in the Arctic Ocean.

“Impacts of the anticipated continued expansion of harmful algal blooms will be significant in a region where traditional monitoring programs for toxins in shellfish, fish, or other food sources are not feasible due to remote and expansive coastlines,” the report stated.

It is these examples of strange occurrences happening on regional and local levels that are a cause for concern, Meier emphasized.

“Anybody who eats seafood should be concerned, because the Bering Sea produces more than half of America’s seafood catch,” Margaret Williams, managing director of the Arctic Program at the The World Wide Fund for Nature, told Salon, adding many other “sea ice-dependent species” like polar bears and walruses have seen their habitats dwindling.

Despite the bleak outlook regarding the report, Williams said that not all hope is lost.

“One thing that is still important to remember is that technically it is still possible to reduce the source of climate change, which is carbon emissions, in the environment, but it all depends on the will of the people — and people can do amazing things,” she said.

Field of Ice911 is one of those people. She’s been working on a way to mimic bright, reflective ice in the Arctic via engineering.

“It’s about replacing a lost functionality,” she said. “We’ve lost our white t-shirt — well, 95 percent of it.”