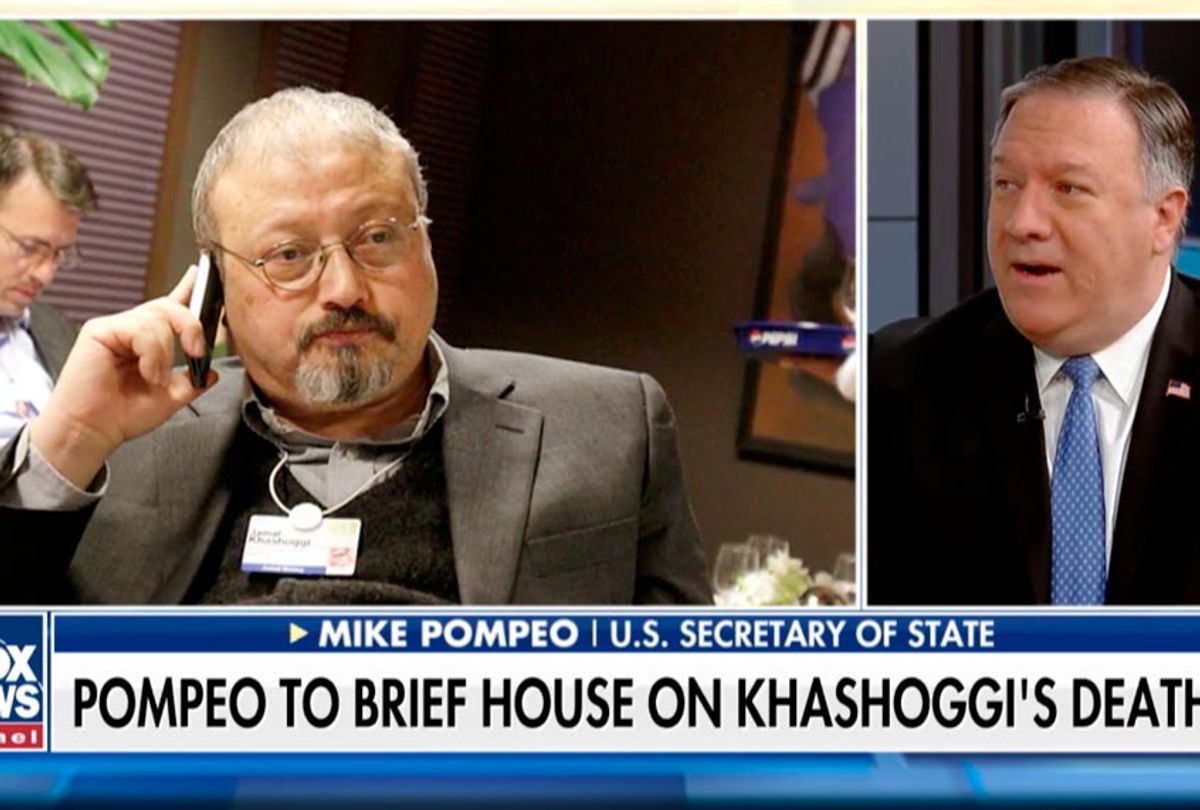 Secretary of State Mike Pompeo found himself in an awkward situation when the hosts of "Fox & Friends" — a show known to be watched and enjoyed by President Donald Trump — held his feet to the fire about the assassination of Washington Post journalist Jamal Khashoggi.

"We're gonna say to the House what we've said to the American people," Pompeo said after being asked about how his upcoming briefing to the House of Representatives regarding Khashoggi's murder, which the intelligence community believes occurred at the direction of Saudi crown prince Mohammed bin Salman. "President Trump's made very clear that the murder of Jamal Khashoggi was a tragic incident. It was heinous. It's not something that America approves of. We've already held a number of individuals accountable by putting sanctions on them, those that we have evidence were directly involved. We'll continue to develop the facts."

Pompeo then added, "But America has an important ally in the Kingdom of Saudi Arabia. They work with us on issues that provide security for America and for Israel. It is an important relationship with the kingdom and we intend to continue to protect the American people in the way that voters back two years ago demanded."

At this point co-host Brian Kilmeade pointed out that many members of Congress believe that Salman is guilty, including Republicans, and that CIA Director Gina Haspel has briefed lawmakers about the evidence indicating his culpability. When Pompeo avoided answering that question, Kilmeade asked, "when you looked him in the eye and he denied it, did you believe him?”

Pompeo evaded Kilmeade's pointed query, saying that "the kingdom of Saudi Arabia decides who is running the country. I think this is what the president said yesterday. We are working closely with the kingdom to make sure that America is protected. That’s our interest there."

He also dodged a question by Ainsley Earhardt about the CIA's "high confidence" about the Saudi crown prince's role in Khashoggi's murder by claiming that "some of the reporting that you have seen on that has been inaccurate."

As The Washington Post reported, Trump has developed a habit of disregarding the findings of his own intelligence community.

Instead, presidential distrust that once seemed confined mainly to the intelligence community’s assessments about Russia’s interference in the 2016 election has spread across a range of global issues. Among them are North Korea’s willingness to abandon its nuclear weapons program, Iran’s nuclear and regional ambitions, the existence and implications of global climate change, and the role of the Saudi crown prince in the killing of a dissident journalist.

Trump's unwillingness to take a stronger stance against the Saudi royal family has alienated many of his supporters in Congress. Sen. Lindsey Graham, R-S.C., made it clear in October that "The MbS figure is to me toxic. He can never be a world leader on the world stage," while around the same time Sen. Marco Rubio, R-Fla., told CNN about Trump not responding adequately to Khashoggi's murder that "if he doesn't, Congress will."

Rubio then added, "That I can tell you with 100 percent certainty. With almost full unanimity, across the board, Republicans and Democrats. There will be a very strong congressional response if in fact the Saudis lured him into that consulate, murdered him, cut up his body and disposed of it. There is going to be a very strong congressional response."