Victorina Morales, Sandra Diaz and other undocumented people speaking out against Trump are models of heroism 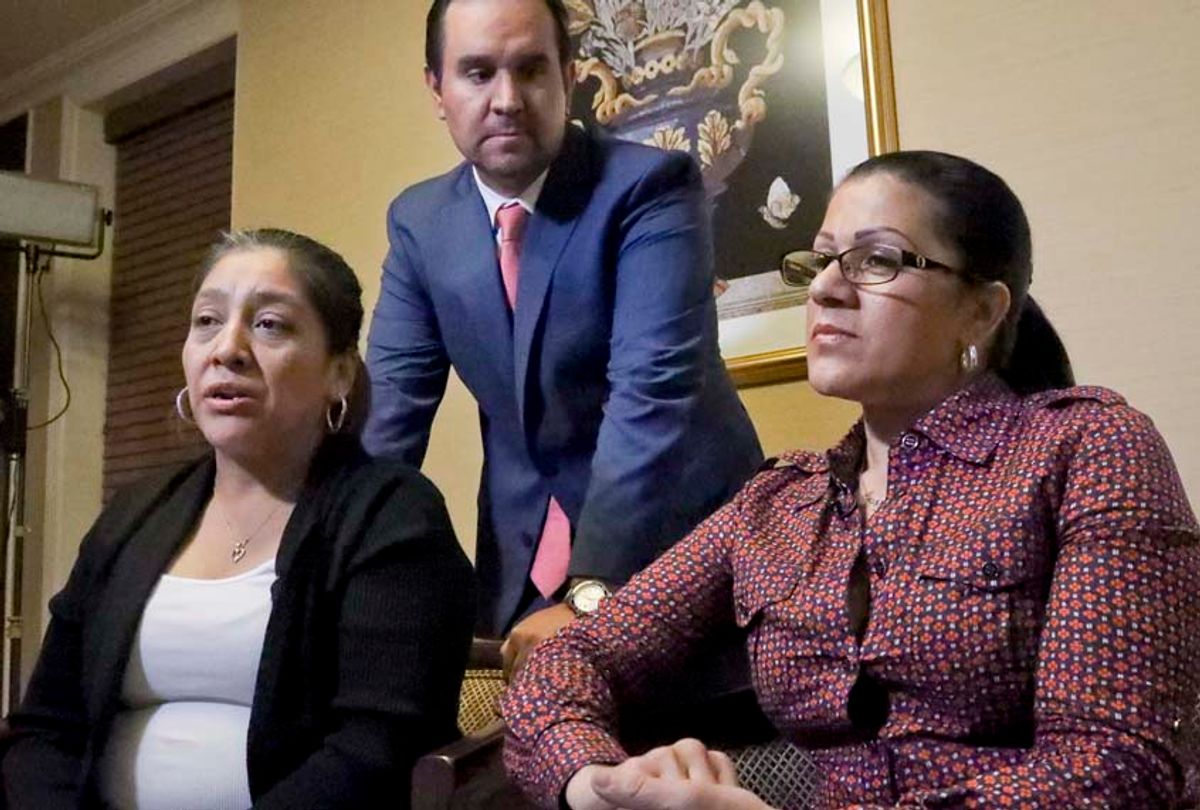 Donald Trump is a bully. He attacks those whom he perceives as weak or vulnerable. Revenge is his life mantra. As House Democratic leader Nancy Pelosi described perfectly after embarrassing Trump in the Oval Office on Tuesday, his version of "manhood" is actually weakness. Pelosi reportedly told her Democratic colleagues in a private meeting, “It’s like a manhood thing for him. As if manhood could ever be associated with him. This wall thing."

Trump is a "little big man" who puffs himself up for his followers and other true believers so that they will then think he is one of "the people" when in reality he likely despises them.

These are the behaviors of autocrats, authoritarians, fascists and tyrants.

From his literal bully pulpit Donald Trump has targeted nonwhite immigrants, refugees, and migrants from Latin America as being vermin, snakes, criminals and terrorists who come to America to "breed" and rape white women.

He has said that African countries are "shitholes" and that Haitians "all have AIDS." Trump tried to ban people from numerous majority-Muslim countries  from entering the United States. He has said that immigrants and refugees from Latin and South America are disease carriers -- the very same language the Nazis used to describe Jews and other groups targeted for destruction.

But the bullied and the victimized do fight back. They do have voices. The powerful often make an error of inference where they confuse relative silence with powerlessness and total submission.

Victorina Morales and Sandra Diaz have chosen to tell the truth about Donald Trump and his hypocrisy and cruelty. They work at Trump's golf resort in Bedminster, New Jersey, where he often spends his weekends. They are the human beings who Donald Trump has repeatedly chosen to vilify as "invaders" and human poison to the body politic.

Last Saturday The Guardian reported on its interview with Morales, a woman from Guatemala without documentation who describes "abusive working conditions" at the Bedminster resort. She said she does not regret speaking out, even though she faces likely firing and possible deportation:

Victorina Morales said in an interview Friday that she cannot go back to Guatemala because her family has received death threats. But she said she felt she had to stand up for other workers without legal documents at the club who have been ridiculed by a supervisor as “donkeys” and “dogs”.

“We need to come out and defend ourselves,” said Morales, 47, brushing away tears. “I had enough with suffering.”

Morales, who said she has not been told definitively that she has been fired, said at least a dozen other workers at the Trump National Golf Club in Bedminster did not have legal documentation.

Morales and another cleaning woman at the club, Sandra Diaz, said they used phony social security and permanent residency documents to get hired, their supervisors knew it and that many employees there also lack legal documents.

They both said they worked at Trump’s house at the club, cleaning his clothes and making his bed, and were angered by his remarks describing undocumented migrants as violent. They said his comments may have encouraged what they describe as rampant verbal abuse at the resort.

Morales, Diaz and other undocumented employees at Trump's properties who are speaking out against him are heroes.

They were not trained to be political spokespeople or activists. They are not paid. They are acting in a selfless manner, at great personal risk, for the benefit of others. This last observation is not hyperbole or exaggeration: Donald Trump's ICE enforcers will likely retaliate against Morales, Diaz and their families. They have done such things before.

I am a proud member of the working class. My mother is a home health care worker. My father was a janitor. When I think of the working class (and working poor) I see the faces of people like Victorina Morales and Sandra Diaz. They work hard, they are proud and dignified, and they provide for their families and communities even while being underpaid and exploited. But these black and brown faces of the American working class are often ignored by the news media, quasi-erased from the (white) popular imagination.

In that version of the American melting pot, the black and brown members of the working class disappear, subsumed by images of angry white conservative white people -- mostly men -- whose grievances are all too often presumed to always be legitimate. Thus, the rage and white backlash politics of the "white working class" are excused away as coincidences or inconveniences instead of as the driving force behind Trumpism, the Tea Party and other reactionary right-wing politics in America.

Victorina Morales and Sandra Diaz are representative of how immigration, both legal and otherwise, is a net gain for America. Immigrants also help to make the United States a more cosmopolitan, vibrant and globally competitive society. And as statistics will bear out, immigrants commit far less crime than native-born Americans.

People like Victorina Morales and Sandra Diaz take care of America's sick, aged, infirm and others who are in need of care, love and attention. These workers in both the informal and shadow economy are often underpaid and exploited.

At least 29 percent of America's doctors are immigrants. Immigrant health professionals are critical to providing care in underserved and under-resourced communities.

Why are Donald Trump, the Republican Party and their supporters so cruel to individuals and communities who contribute so much to American society?

Of course, Trump behaves this way because he can. Such behavior is central to his being.

Cruelty, violence, and meanness are also a form of social glue for the American right. Much of Trump's public policy -- and his enduring popularity among his supporters -- is based upon making cruelty into law.

Trump's movement, and today's American conservatism more generally, rests on the sentiments of white grievance-mongering and white insecurity about maintaining social dominance and group power. As seen through this version of the white gaze the "other" is somehow "skipping ahead in line" while "real Americans" (meaning white people) are being "left behind" in "their own country."

Trump's cruelty and that of the Republican Party, their news media and their public is also a form complicity in immorality, where the normalization of horrible behavior makes it more likely and more acceptable

But when you’ve done all this, there is a crucial next step, usually the trickiest of all. You have to undermine moral boundaries, inure people to the acceptance of acts of extreme cruelty. Like hounds, people have to be blooded. They have to be given the taste for savagery. Fascism does this by building up the sense of threat from a despised out-group. This allows the members of that group to be dehumanised. Once that has been achieved, you can gradually up the ante, working through the stages from breaking windows to extermination.

To see, as most commentary has done, the deliberate traumatisation of migrant children as a “mistake” by Trump is culpable naivety. It is a trial run – and the trial has been a huge success. Trump’s claim last week that immigrants “infest” the US is a test-marketing of whether his fans are ready for the next step-up in language, which is of course “vermin”. And the generation of images of toddlers being dragged from their parents is a test of whether those words can be turned into sounds and pictures. It was always an experiment – it ended (but only in part) because the results were in.

Perhaps most important as a signpost for the larger cultural and political crisis of which Donald Trump is both a symptom and an instigator, in Trump's role as president he only understands power as something negative and destructive. In a new essay for the New York Review of Books, political scientist and legal scholar Bernard E. Harcourt warns:

Trump is methodically engaging in verbal assaults that throw fuel on his political program of closed borders, nativism, social exclusion, and punitive excess. Even his cultivated silences and failures to condemn right-wing violence, in the fatal aftermath of the Unite the Right rally in Charlottesville, for instance, or regarding the pipe-bombing suspect Cesar Sayoc, communicate directly to extremists. We are watching, in real time, a new right discourse come to define the American presidency. The term “alt-right” is too innocuous when the new political formation we face is, in truth, neo-fascist, white-supremacist, ultranationalist, and counterrevolutionary.

Too few Americans appear to recognize how extreme President Trump has become — in part because it is so disturbing to encounter the arguments of the American and European new right. But we must — and we must call Trump out for deploying them to gain power.

We have been insufficiently attentive to how carefully crafted and targeted Trump’s new right discourse and politics are, how they deliberately encourage and mobilize extremists, and normalize them as a crucial political constituency .... Speaking openly to the new right, Trump is rallying and emboldening a counterrevolutionary politics. If the American people do not act soon, we risk being caught in a downward authoritarian spiral or violent civil strife.

However Trump's rule ends there will be stories of resistance, stories of those people who tried to stop him and his movement.

If Trump and his cabal are removed from office -- through impeachment and conviction, resignation, incarceration, or some combination of those possibilities -- special counsel Robert Mueller and his team will be hailed as patriots who saved the United States from a criminal, corrupt and perhaps traitorous president and his inner circle.

Those members of government, the professional bureaucrats and others who value stability and continuity in America's constitutional republic and want to see the country remain a dominant power in the world -- and who, in the service of that goal, worked against Trump's plans and policies -- will also be praised.

The people who marched and organized on an ongoing basis, ran for public office to oppose the Republican Party, did work in their communities to protect human rights, donated money and time, or resolutely engaged in literal corporeal politics as they stood up against right-wing street thugs will also feature prominently in this story of American renewal.

But in writing this history of the Age of Trump, the working class and the working poor, those who are the real everyman and the real everywoman -- the authentic "silent majority," not Trump's "deplorables" -- must not be ignored. As Chicago's famed oral historian, journalist and reporter Studs Terkel wrote in "Working: People Talk About What They Do All Day and How They Feel About What They Do":

This book, being about work, is, by its very nature, about violence -- to the spirit as well as to the body. It is about ulcers as well as accidents, about shouting matches as well as fistfights, about nervous breakdowns as well as kicking the dog around. It is, above all (or beneath all), about daily humiliations. To survive the day is triumph enough for the walking wounded among the great many of us.

Despite all their stress, anxiety and exhaustion, those Americans who survive and occasionally triumph over those "daily humiliations" are part of the resistance against Donald Trump and American fascism. They often do this quietly. Sometimes publicly. But if we listen to and empower those in the working class and the working poor, America may, after the nightmare of Donald Trump's regime, become a more democratic, free and humane society.

Victorina Morales and Sandra Diaz are heroes. They are also role models. They are not alone.