Trump's border violence is sick entertainment for his fans: And they love it

Trump's supporters were thrilled by the tear-gas assault on migrants at the border. He has trained them well 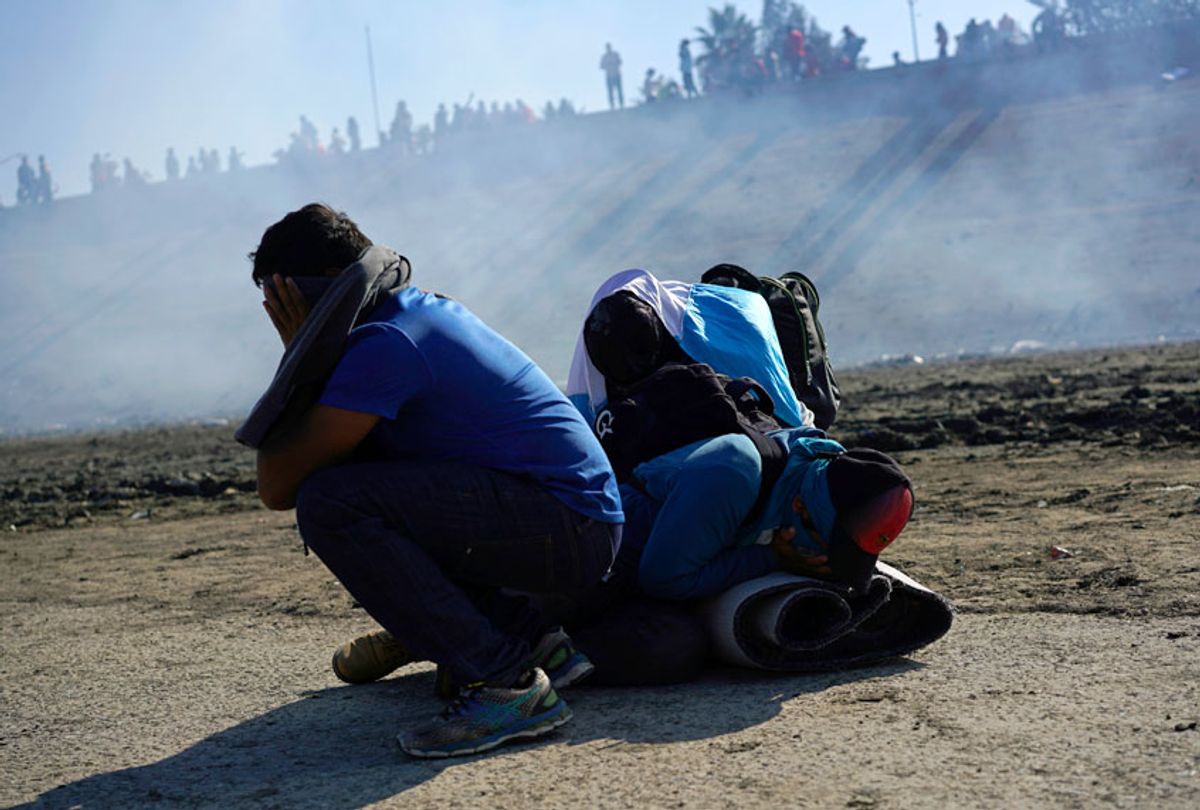 Three Honduran migrants huddle in the riverbank amid tear gas fired by U.S. agents on the Mexico-U.S. border after they and a group of migrants got past Mexican police at the Chaparral border crossing in Tijuana, Mexico, Sunday, Nov. 25, 2018 (AP/Ramon Espinosa)
--

Eliminationism is violence, usually encouraged by powerful social and political elites, against whole groups of people who are deemed to be "pollutants," "subhuman" or in some other way "inferior." Such language and values have been almost fully normalized in America under Donald Trump.

For several decades the right-wing echo chamber has told its followers (and the general public) that Democrats, liberals, progressives and any other group that Republicans and conservatives viewed as the enemy were to be vanquished and destroyed -- literally. This violent language is so commonplace that when Republicans and other conservatives use it, most critics, and the public as a whole, do not take the matter seriously. It is now the equivalent of background noise in America's public discourse.

Donald Trump encourages violence against his political enemies as a matter of routine. He has targeted nonwhite immigrants, refugees and migrants for eliminationist violence by calling them "snakes," "vermin," "invaders," "rapists," "criminals," "murderers," "terrorists" and human poison who only want to come to America to "breed" while also raping and killing white people. Trump's language is not much different from the way the Nazis described Jews and other peoples they targeted for genocide. So it is not surprising that Trump and the right-wing media's encouragement of eliminationist violence has born lethal fruit.

Several weeks ago a neo-Nazi killed 11 Jewish people in a Pittsburgh synagogue because he was inspired by Donald Trump's anti-Semitic fear-mongering and conspiracy theories about a "caravan" of nonwhite immigrants from Latin and South America who were traveling to the United States in search of asylum.

The Washington Post has published a new report showing how Trump's presidency and campaign have encouraged right-wing domestic terrorism and other types of violence. To point: One of Trump's political cultists sent bombs to at least 12 Democrats in what could be described as the largest political assassination plot in United States history.

But again, Donald Trump's behavior has been normalized. It is no longer a source of mass outrage and protest. The American people have rapidly adjusted to this toxic political and social climate.

In total, America under Donald Trump is a very sick society. He is the leader of a pathocracy. A healthy society would not behave in such a way.

In a sick society, violence and cruelty are normalized as a type of spectacle. It is not just that leaders and other elites give permission for this behavior but also that individuals and groups must participate. The fascist authoritarian may have a great amount of charisma. He or she may control the military and police and the media. But as with the American form of fascism under Donald Trump he requires complicity and support from a significant percentage of the public. Permission for violence is one of the primary ways of winning this loyalty.

Last weekend, several hundred migrants and refugees attempted to cross between Tijuana and San Diego in order to claim asylum and refugee status in the United States. This is their right under American and international law. In response, they were shot at with tear gas. Unarmed men, women and children were forced to flee. The resulting images were not those of American greatness but rather American weakness.

Over the weekend, Trump's defenders joked about inflicting such cruelty on vulnerable and desperate people, saying about tear gas: “It’s literally water, pepper, with a small amount of alcohol for evaporation purposes. It’s natural. You could actually put it on your nachos and eat it." Trump escalated this by claiming that U.S. Border Patrol agents were at great risk. He told an especially bizarre additional lie to deflect criticism and outrage, saying that the "tear gas" was "special" and "gentle."

One Fox News commentator took to social media and gloated, “Bum-rushing the border is a CHOICE and has consequences. Watching the USA FINALLY defend our borders was the HIGHLIGHT of my Thanksgiving weekend.”

While Trump and his allies have claimed that the use of force along the border is intended as a "deterrent" to stop "invaders" from abroad, this is not true. The real audience is domestic.

Violence against nonwhite immigrants, refugees and migrants serves Donald Trump's interests by exciting his public. He is made to look powerful and virile.

In this role, Trump is the "strong father" who can protect his insecure and easily frightened (white) "real Americans" from a nebulous black and brown horde of Spanish-speaking people. Daddy Trump loves his adult babies.

Online and elsewhere, Trump's public spoke loud and clear in support of their leader's (and by extension our nation's) cruelty.

At websites such as Breitbart and Fox News there were comments suggesting that the migrants in the "caravan" should be machine-gunned, bombed and burned alive; that liberals are part of a conspiracy to destroy "real America" and should be deported (or worse); and that the caravan should be attacked by the U.S. Army as "invaders."

Such sentiments reflect the collective narcissism which is a prerequisite for eliminationism. Violence is a form of social glue that helps to bind Donald Trump's right-wing authoritarian movement and its various elements together.

Philosopher (and Salon contributor) Henry A. Giroux writes about this in his new book "American Nightmare":

Such actions do more than reinforce Trump's endorsement of white nationalism; they send a message of support for a culture of violence, amounting to acts of domestic terrorism. ... Trump's law-and-order regime represents a form of domestic terrorism because it is a policy of state violence designed to intimidate, threaten, harm, and instill fear in a particular community.

Nationalism is at the core of fascism. The fascist leader employs a sense of collective victimhood to create a sense of group identity that is by its nature opposed to the cosmopolitan ethos and individualism of liberal democracy. The group identity can be variously based--on skin color, on religion, on tradition, on ethnic origin. But it is always contrasted with a perceived other against whom the nation is to be defined. Fascist nationalism creates a dangerous "them" to guard against, at times to battle with, to control, in order to restore group dignity.

Ultimately, Donald Trump's violence against nonwhite refugees and migrants along the Mexican border is but another example of a culture of distraction and amusement where most Americans have become numbed to the aberrant, the grotesque and the spectacular. Here, suffering is made normal through a broader culture of violence against the poor and any other groups and people deemed to be "disposable" in a 21st-century version of "social Darwinism."

This normalization of violence through the spectacular is seen -- quite literally -- in the drone attacks by the American military around the world, where human beings are blown apart while being described as "targets" and "collateral damage," in the New Age lynching photographs and videos of black and brown bodies being killed by America's police and street vigilantes, and of course in the images of nonwhite bodies being abused by Trump's ICE enforcers, the audio of crying babies in Trump's concentration camps and the tear-gassing of desperate migrants and refugees along the southern border.

State-sponsored violence is moved away from the day-to-day lives and experiences of many Americans and made into something peripheral that happens "over there," even if the "over there" is within the United States in places like Ferguson, Missouri, or Standing Rock, North Dakota; or the country's prisons and jails; or the black and brown communities whose police all too often treat residents like members of an insurgency that needs to be "pacified" and "neutralized."

This imagined social distance does not free the American people from collective responsibility and culpability for the violence done in their name.

In an interview in the recently published volume "Violence," philosopher George Yancy talks about the concept of shame:

Your use of the term shameful is important. Shame implies a powerful sense of disgrace. It is not limited to the assignment of blame, which is more like guilt. Shame suggests the tense of disrupting one's ethical "certainty," or business as usual. After all, one can be guilty without ever feeling shame. So, violence, for me, has to be attended to at those levels where we are going about our business as if we are not doing violence to other individuals. The fact that we don't hear cries of pain doesn't let us off the hook.

Violence is all around us. Yet we prefer to remain asleep -- the walking dead.

Yancy is correct. Those who are beguiled by violence and numb to the damage it causes other human beings are truly the "walking dead". This is especially true of Donald Trump's supporters who cheer on the violence at the U.S.-Mexico border. These "walking dead" do this because they believe, on a fundamental level, that they can and will never be the Other. In reality, this is not the case. Dehumanization and cruelty of this kind create a centrifuge-like maelstrom that all too often sucks in its own cheerleaders. American fascism under Donald Trump will likely be no different.