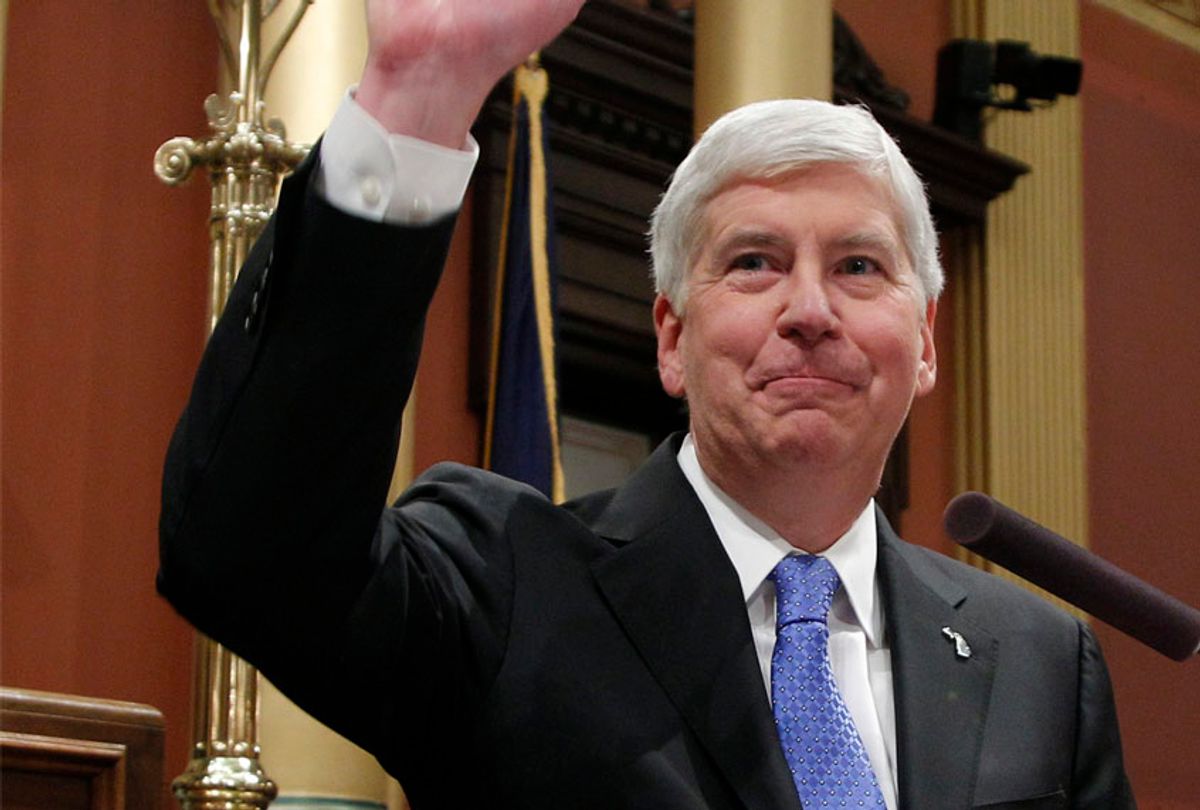 Dr. Eden Wells, the chief medical executive for Michigan who is currently facing a jury trial on a criminal charge of involuntary manslaughter for her role in the Flint water crisis, was just hired by the state for a new job.

Wells, an appointee of Republican Gov. Rick Snyder, was hired to fill a new position in the Michigan Department of Health and Human Services that will be protected in ways that her current job is not and will pay her $179,672, according to MLive-The Flint Journal. The state claims that Wells was the only person to apply for the "advisory physician" position and that it had been posted for less than a week in November before they decided to offer her the cushy job.

"MDHHS determined there was a need for an advisory physician to the Population Health Administration, as we have with other administrations within the department. The position will advise the administration on public health issues such as HIV, Hepatitis C, environmental health and more given the increasing focus on these and other public health issues in Michigan. MDHHS posted the position, and Dr. Wells was chosen for the role," spokeswoman Angela Minicuci told MLive-The Flint Journal in an email.

Wells is a controversial figure in Michigan politics because she has been blasted for his mishandling of the Flint water crisis. Last week Judge William H. Crawford II ruled that Wells needed to stand trial on involuntary manslaughter charges in a criminal investigation, according to the Associated Press. She is the second high-ranking state official to be ordered to trial, along with Health and Human Services Director Nick Lyon, and was charged last year by Michigan Attorney General Bill Schuette with obstruction of justice and lying to the police (he added the manslaughter charge at a subsequent date).

Schuette and others have said that Wells knew about an increase in Legionnaires' disease in Flint in 2014 and 2015 but chose not to warn the public. Wells' attorney claims that she was not under any legal obligation to notify the public.

While it is unclear whether Wells' ability to get a job despite standing trial on serious criminal charges has anything to do with her political connections, it would not be unheard of for the Michigan Republican Party to do something extraordinary in order to protect its own interests.

"The GOP in Michigan has a history of bold moves, regardless of the will of the voters," Tom Ivacko, Associate Director of CLOSUP at the Gerald R. Ford School of Public Policy at the University of Michigan, told Salon by email earlier this month. "They locked down the Capitol during the 2012 lame duck session and rushed through Right-to-Work legislation over a chorus of angry protesters outside, in the birthplace of the labor movement. One of their most aggressive moves relates to the state’s controversial Emergency Manager law, which allows the Governor to appoint an Emergency Manager for a distressed municipality, thereby voiding all power of local elected officials. Michigan voters overturned the law by a statewide ballot in 2012, but just weeks later, during the same lame duck session that produced the Right-to-Work bill, the legislature made a few relatively minor tweaks and passed a new version of the Emergency Manager law, clearly overriding the expressed will of the voters."