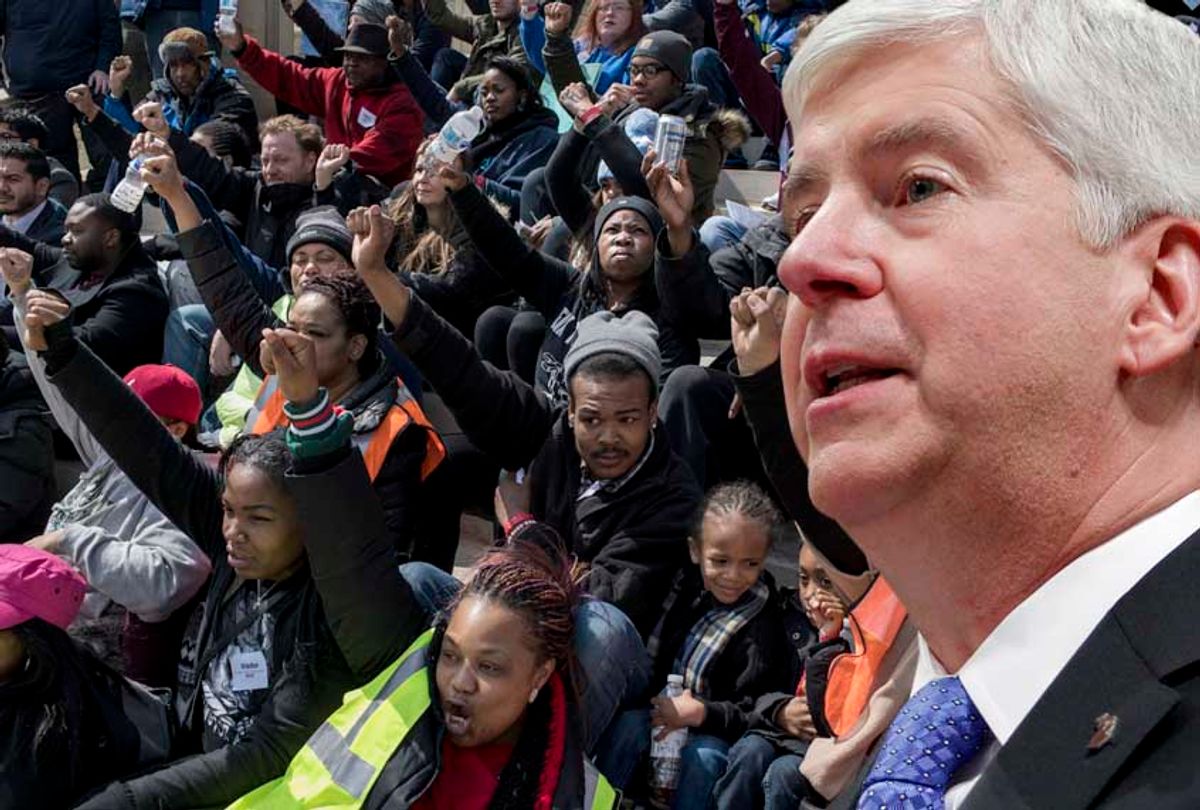 Michigan Gov. Rick Snyder; Protest on the steps of the Michigan State Capitol on April 11, 2018 (AP/Getty/Salon)
--

As Republicans in the Michigan legislature work to strip power away from newly-elected Democrats, protesters are packing the capitol to voice their opposition to actions they consider undemocratic.

The underlying issue is that the Republican-controlled legislature is pushing a series of bills intended to limit the powers of the newly-elected governor, attorney general and secretary of state, according to Common Dreams. It reported that demonstrators have entered the capitol building in Lansing and are chanting "The people, united, will never be defeated!" The concern is that, by stripping power away from duly elected officials, Michigan Republicans are essentially negating the choice made by the voting majority in their states.

The Republican-controlled Michigan legislature hasn't only gone after Democratic officials. They have also worked to undermine initiatives supported by voters that would increase the minimum wage and forced workers to provide paid sick leave to their employees.

CBS News reported on the reactions to the protests from Gov. Rick Snyder, the Republican incumbent whose term expires in January, and the Governor-elect, Democrat Gretchen Whitmer.

"They would not be doing this had the Republicans won the race for governor," Whitmer pointed out. "I think that they don't want me to be successful. They don't want to lose the chance to direct the agenda."

"First, it is important to note that none of the current lame-duck moves by the GOP have yet been signed by Governor Rick Snyder," Thomas Ivacko, Associate Director of CLOSUP at the Gerald R. Ford School of Public Policy at the University of Michigan, told Salon earlier this month. "Given his past acquiescence to other bold moves by the GOP-controlled legislature, few in Michigan will be surprised if Governor Snyder does sign or allow these bills to become law. Nonetheless, Snyder is not a Scott Walker-style partisan. He is more centrist than Walker, although it is true that he has gone along with the very conservative Michigan legislature on many policies during his two terms. Still, Snyder is term-limited and on his way out, and he may be considering his legacy which will already be defined in part by the disastrous Flint water crisis. Signing off on these kinds of raw GOP power grabs would also be long-remembered in Michigan, and so it is still within the realm of possibility that Snyder will veto at least some of these efforts."

He added, "Having said that, the GOP in Michigan has a history of bold moves, regardless of the will of the voters."