Justice for Cyntoia Brown: A child trafficking victim shouldn't be treated like a criminal adult

The 16-year-old killed the man she was sold to. Tennessee's governor has the chance to make this right 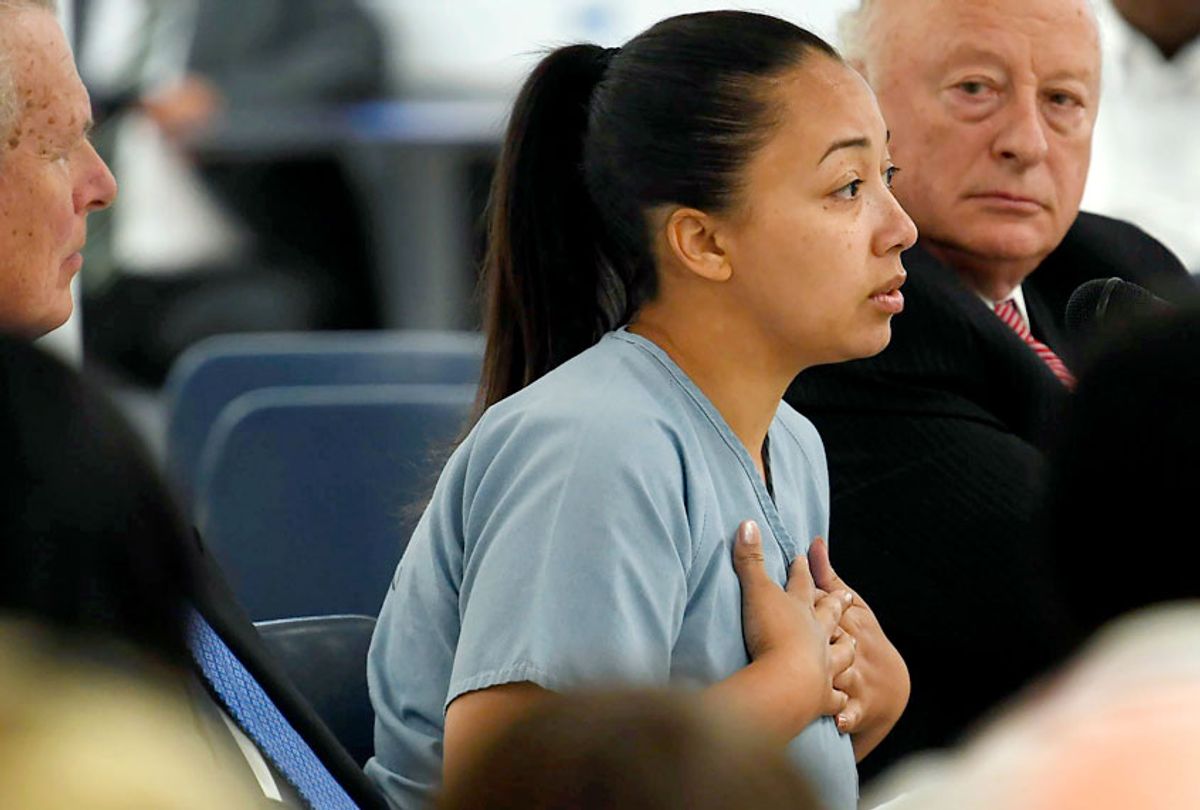 Cyntoia Brown, a woman serving a life sentence for killing a man when she was a 16-year-old sex trafficking victim, asks for a second chance during a clemency hearing Wednesday, May 23, 2018, at Tennessee Prison for Women in Nashville, Tenn. (Lacy Atkins/The Tennessean via AP)
--

At the age of 16, Cyntoia Brown was sentenced to life in prison for the murder of 43-year-old Johnny Mitchell Allen. Brown said an abusive 24-year-old pimp known as Kut Throat beat her and forced her into prostitution, then sold her to Allen for sex. Brown says Allen became overly aggressive after they reached his home and she killed him because she thought her life was in danger. Prosecutors, however, argued that Brown didn't act in self-defense because she had intentions of robbing Allen. Last week at Brown’s appeal, the Tennessee Supreme Court ruled that Brown must serve at least 51 years before she is eligible for parole, sparking an outcry from advocates for girls and victims of sex trafficking.

But all is not lost. Tennessee Governor Bill Haslam is now considering clemency for Cyntoia Brown after being confronted by Black Lives Matter activist Justin Lang at an event on the importance of education, as reported by Rolling Stone:

“Since we’re here talking about education, I wanted to ask a question about one of your Tennessee students and a graduate of Lipscomb University, Cyntoia Brown.

"The Supreme Court’s decision that Cyntoia must serve 51 years before she can be considered for parole is a human rights issue,” Lang said. “And so I ask you, what really, functionally, is the difference between life without parole—which is no longer constitutional as the United States Supreme Court declared for minors, for any crime—and ‘you might get parole after 51 years,’ for a victim of sex trafficking?”

“We’re reviewing a lot of cases,” Governor Haslam responded, “and while Cyntoia’s case has gotten a lot of publicity, I don’t think you want us to treat hers any different than a whole lot of cases that I think people want us to review.”

Haslam's answer didn't satisfy the audience, as chants of “No justice! No peace!” rang out in response. Those cries for fairness are spreading. Celebrities such as Rihanna, Ti, Kim Kardashian West and Cara Delevingne have been using their platforms to advocate for Brown. Meek Mill, who just received a major blessing from the system, tweeted, “Free this girl!!!!!!!! We come from the same circumstances ...trying to save your own life could get you life in prison! #cyntoiabrown.”

Gov. Haslam has a lot to consider in this case. I don’t think anyone should be murdered, but why did the fact that Allen bought a 16-year-old for sex not dominate this conversation? And why are we not talking about sex trafficking and the fact that she is a child? I wonder if the prosecutors took the time to reflect on what they were doing at the age of 16? Being a captured by a pimp is nightmarish; being captured by a pimp as a child has to be worse. She was likely frightened and traumatized when she pulled that trigger — does that even matter? Was she even in the right frame of mind when it happened? How can our system allow a tortured child to be treated like a sane criminal adult, with no counseling and no support, just punishment?

Brown’s story made me think of a patron who used to hang in the southwest Baltimore bar I owned back in the early 2000s. She was really nice, as thin as she was tall, quirky, and pleasant — on good days. On others, she’d come in, flop on a stool and immerse herself in Evan Williams ( what we used to call Jack Daniels' black friend). Money troubles seemed to be an ongoing theme in her life. I even gave her a job at the bar once, but the guy she dated on and off made her quit. He was one of those small, chubby, big-ego guys who only wore sweat pants, and he thought everyone was trying to steal her away from him.

Some days she’d come in wearing piles of makeup, and we knew what it was covering. She also had young son around 10 years old, and at times he looked beat up as well. Older dudes who used to hang around in front of the bar would give him a couple of dollars for food because we all thought his mom was cool. Things got bad for her about two years into me knowing her. I could tell that she had switched to drugs hard enough to absorb her light, quirky spirit. By then I knew a little more about the neighborhood as well, and found out that the guy she dated was a pimp, an abusive one who looked up to big-name pimps like Bishop Don Magic Juan and Pimpin Ken. A customer told me that he bragged about pouring water on his women before spanking them with an extension cord whip attached to two wire hangers. I couldn’t confirm if all of the abusive stories were true, but I saw the women he was affiliated with and their bruises, and I knew they were sex workers.

The young woman died from an overdose before I sold the bar. My last memory of her was one late night when we bumped into each other at a rival bar called Virgo's, and she was rushing and saying how bad she needed to get home to her boyfriend. I felt bad for her, for the illusion of love he sold to her, and most of all for her son.

What’s even worse is that if she would’ve been able to overcome the world of pain she was in and liberate herself from her abuser, the reward probably would mirror Brown’s case, life in prison because victim blaming is the American way.