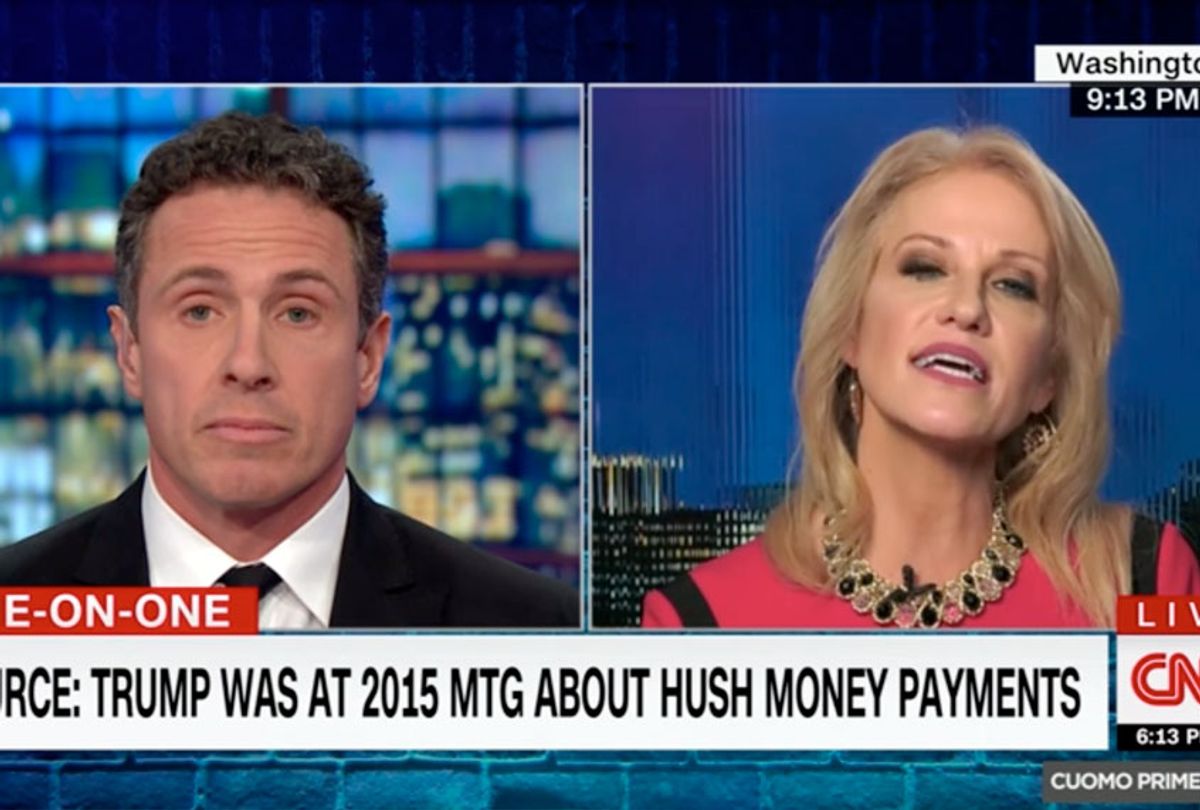 White House counselor Kellyanne Conway claimed that it is a "slur" to accuse President Donald Trump of lying during a widely-panned Thursday night appearance on CNN.

In the nearly 40-minute interview, Conway went on the offensive against CNN's Chris Cuomo, telling the host that he "took a shot at the president tonight. You called him a slur, and I'm not going to repeat it."

Conway and Cuomo discussed special counsel Robert Mueller's investigation into allegations of collusion between Trump's 2016 presidential campaign and the Russian government; Michael Cohen, the attorney who spent many years working as Trump's personal "fixer;" and CNN's ongoing coverage of the president.

Cohen on Wednesday was sentenced to three years in federal prison for what U.S. District Judge William H. Pauley III called a "smorgasbord" of crimes, including his role in buying the silence of women who alleged affairs with the future president during the 2016 presidential election. Cohen, speaking in court, implicated the president in those hush-money transactions and confessed that he felt it was his duty to cover up Trump's "dirty deeds."

Federal prosecutors have echoed Cohen's admission that Trump instructed his former lawyer to pay off adult film star Stormy Daniels and former Playboy playmate Karen McDougal. They allege that Cohen arranged the deals "in coordination with and at the direction of the candidate," referring to Trump, "for the principal purpose of influencing the election" for president in 2016. The $130,000 payment to Daniels and $150,000 payment to McDougal are considered by the government to be an illegal donation to Trump's campaign, since they were allegedly intended to improve Trump’s election chances. The legal limit for individual contributions is $2,700 in a general election.

Prosecutors also reached a non-prosecution agreement with American Media, Inc. (AMI), the parent company of the National Inquirer, in which the tabloid admitted it paid hush money to McDougal before the 2016 election "in concert" with the Trump campaign.

During her CNN appearance, Conway, who has been one of the most visible faces of the Trump administration, insisted that the president did not know anything about the illegal hush-money payments, in spite of Cohen and AMI's admissions. Trump, meanwhile, has provided shifting explanations about when he learned about the payments to the women. Earlier this week, he insisted that the hush-money payments to women were "a simple private transaction" unrelated to the campaign. He also argued that, even if the hush-money payments were campaign transactions, any failure to obey federal election regulations should be considered only a civil offense – not a criminal one — and that Cohen, as an attorney, bore responsibility if anything illegal occurred.

Conway on Thursday also accused Cuomo of not wanting the country to succeed and suggested that television viewers do not enjoy when he books her on his primetime show "for a very simple reason" – he is anti-Trump.

"No, the reason they get frustrated is that you guys don't answer questions, and that you spin a lot and that you ignore what's obvious fact," he responded.

When Conway then "dared" the host to call her a "liar," Cuomo retorted, "If I have to, I will."