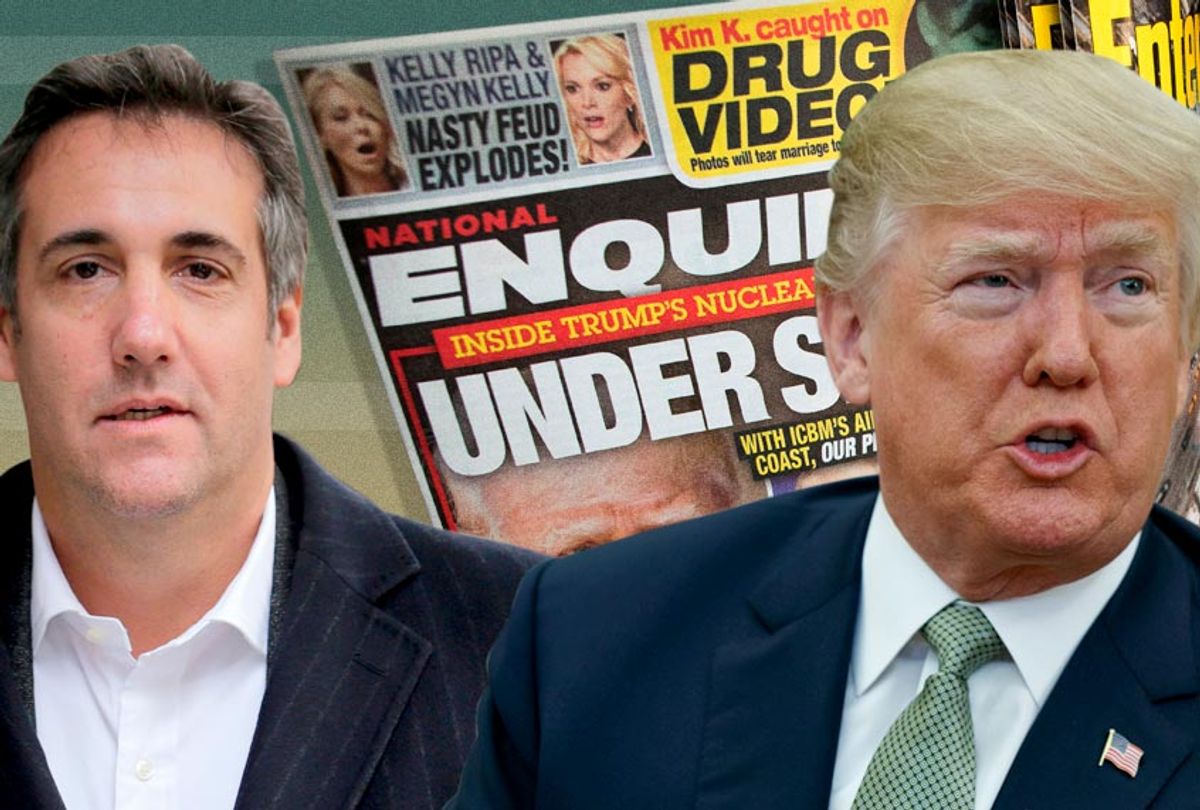 Federal prosecutors announced on Wednesday that they agreed not to go after American Media Inc., the parent company that owns the "National Enquirer" tabloid, in part in return for the company's public acknowledgment of having paid $150,000 to a woman for the story of her affair with Donald Trump in order to prevent it from hurting his presidential campaign.

"The Office also announced today that it has previously reached a non-prosecution agreement with AMI, in connection with AMI’s role in making the above-described $150,000 payment before the 2016 presidential election. As a part of the agreement, AMI admitted that it made the $150,000 payment in concert with a candidate’s presidential campaign, and in order to ensure that the woman did not publicize damaging allegations about the candidate before the 2016 presidential election. AMI further admitted that its principal purpose in making the payment was to suppress the woman’s story so as to prevent it from influencing the election," the U.S. attorney’s office explained in a statement that also discussed the sentencing of former Trump attorney Michael Cohen.

The statement also said, "Assuming AMI’s continued compliance with the agreement, the Office has agreed not to prosecute AMI for its role in that payment. The agreement also acknowledges, among other things, AMI’s acceptance of responsibility, its substantial and important assistance in this investigation, and its agreement to provide cooperation in the future and implement specific improvements to its internal compliance to prevent future violations of the federal campaign finance laws. These improvements include distributing written standards regarding federal election laws to its employees and conducting annual training concerning these standards."

David J. Pecker, the publisher of the supermarket tabloid, has been a close friend of Trump's since the 1990s. Over the years Pecker made a point of capitalizing on his closeness with Trump in order to sell newspapers. Starting in 2010, he began running articles that encouraged Trump to run for president and depicted him as a potentially positive force for America, a practice AMI previously denied.

The Enquirer also encouraged people to visit a website co-created by Michael Cohen himself back when he was still Trump's right-hand man, and when Trump began promoting the birther conspiracy theory about President Barack Obama, the Enquirer began pushing the racist hoax as well.

When Trump ran for president during the 2016 election cycle, the Enquirer helped him by running regular attacks on his opponents. Its headlines included claiming that Hillary Clinton had gained 103 pounds, that she had suffered two strokes (this specific claim was published in the Globe, which is also run by American Media Inc.) and that she only had six months to live.

Its practice of catch-and-kill was part of this larger pro-Trump strategy: Like many other biased media outlets, the Enquirer purchased exclusive rights to a story that could hurt its candidate's chances — in this case, about an alleged extramarital affair — and then refused to publish it so that it wouldn't come out during the election cycle.