Trump and the National Enquirer: David Pecker could be very bad news for Trump

David Pecker, publisher of the National Enquirer, is coming clean at last. Trump knows that could spell doom 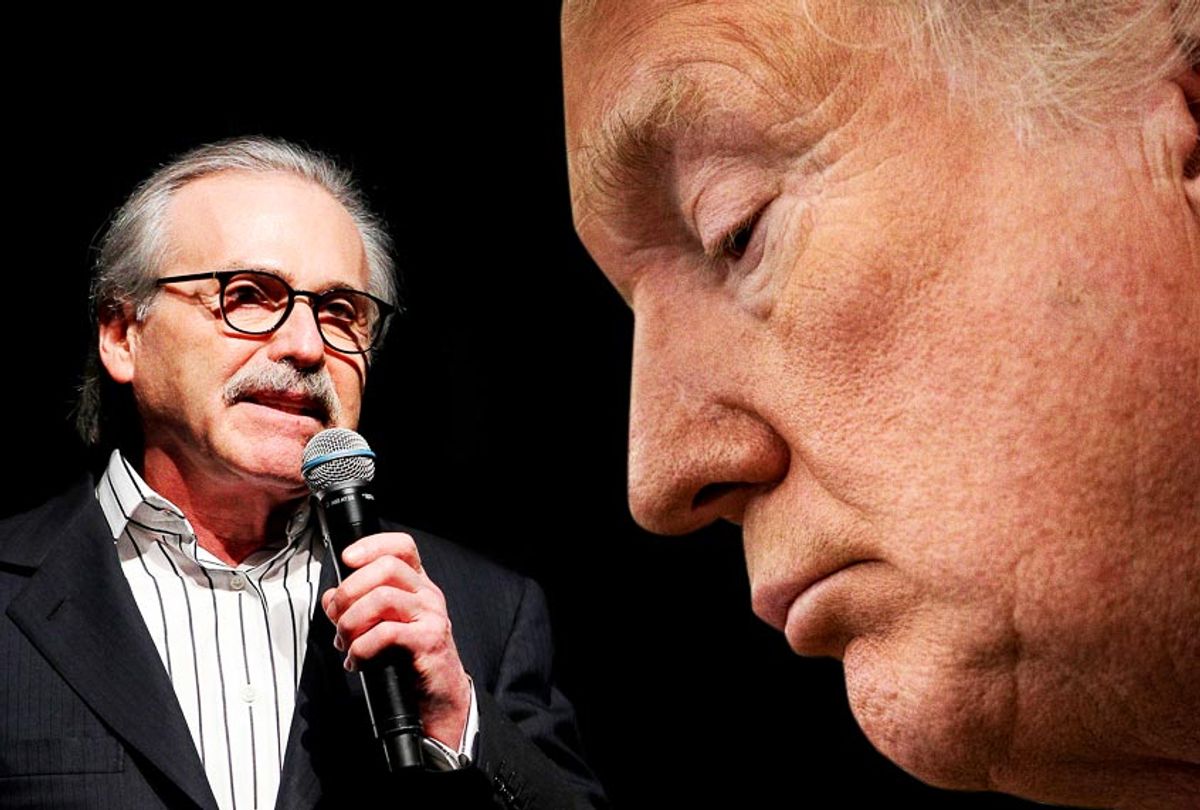 Bill Clinton made a number of memorable comments over his years in public life, from "I feel your pain" to "It depends on what the meaning of 'is' is." But I think we all know that the one he will be most remembered for is this infamous line: "I did not have sexual relations with that woman, Miss Lewinsky, and I never told anyone to lie, not even once." That will probably be in the first paragraph of his obituary.

Donald Trump has made so many inane, dishonest comments that it would take days to lay them all out. But it's not impossible that one of the most memorable will be something he said on Thursday in an interview with Fox News' Harris Faulkner, which has some obvious echoes of Bill Clinton's ill-fated line.

When asked about the Southern District of New York's announcement that his former friend David Pecker, CEO of American Media, the company that publishes the National Enquirer, had corroborated Michael Cohen's testimony that Trump had arranged hush money payments as part of the election campaign, Trump said this: "I don't think they even paid any money to that tabloid, OK. I don't think we've made a payment to that tabloid."

He added later, "Let me tell you, I never directed him to do anything wrong," in reference to Cohen.

It's hard to believe that Trump coincidentally use such similar phrasing, but it's reasonable to assume he had no idea he'd done it. As usual, Trump was simply dancing as fast as he could to reassure his followers that there's nothing to any of this except a lawyer who lied to get a lighter sentence. Somewhere in his subconscious, he probably knows he's in a similar fix to the one Clinton faced 20 years ago.

Trump's entire commentary about Cohen to Faulkner was unintentionally self-incriminating. He first claimed that Cohen was a low-level nobody, just a PR guy:

He did very low level work. ... He did more public relations than he did law. But he did -- so if you'd see him on television, he was OK on television, but years ago, many years, like 12, 13 years ago, he did me a favor. He was on a committee and he was so responsive and so good. And I said, he's a nice guy.

Later in the interview, he claimed that he put his faith in this low-level PR guy to follow federal campaign finance laws:

Cohen actually doesn't "understand" that. He just pleaded guilty to carrying out Trump's order to violate the law and he's going to prison for three years. Even some commentators on Fox News were clear on how bad the news was for the president:

Being the classy statesman that he is, Trump also took a shot at Cohen's wife and father-in-law in the Faulkner interview, suggesting that Cohen testified that Trump ordered him to break the law in order to protect his family from prosecution. Even the mafia doesn't go after the families.

Apparently, the owner of the National Enquirer must also have it in for Trump too because the Wall Street Journal confirmed yesterday that back in August of 2015, Trump called Pecker and Cohen into his office and asked Pecker what he could do to help the presidential campaign. That was when the conspiracy was hatched to secretly pay out hush money in violation of campaign finance laws:

Pecker offered to help deal with negative stories about that presidential candidate's relationships with women by, among other things, assisting the campaign in identifying such stories so they could be purchased, and their publication avoided.

So, it turns out that the payments to Stormy Daniels and Karen McDougal weren't the result of some last-minute maneuverings to keep Trump's affairs out of the press after the "Access Hollywood" tape was revealed. This was a long-running strategy, and it's entirely possible there were more of these arrangements we don't yet know about.

There's been talk about a safe kept in Pecker's National Enquirer offices that was rumored to contain all kinds of dirt on Donald Trump. If that even exists, it's not known whether it's been turned over to the feds or Pecker has hung on to it. We do know that Pecker's relationship with Trump goes back decades, as demonstrated by the fact that Trump called him in to ask Pecker what he planned to do to help him win the presidency. But they have since fallen out and it's not quite clear where they stand today.

Pecker isn't the only person at the National Enquirer involved with putting out Trump's fires. In November, Page Six reported this, which may make the contents of that apocryphal safe superfluous:

Page Six is told that the longtime executive editor of the tabloid, Barry Levine, is penning a book for Hachette about the president. A source says that the book will look into “Trump and his women,” although other insiders tell us that it could be more wide-ranging, even looking at the formerly cozy relationship between the Enquirer’s owner, David Pecker, and Trump. ...

Levine — who left the Enquirer in 2016 after 17 years — will have plenty of previously unreported material for the tome. Levine has a pedigree in political exposés. He was part of a team that uncovered veep candidate John Edwards’ love child.

The word is that once "The Apprentice" hit the airwaves tons of stories came over the transom that were killed by Pecker on behalf of Trump. Levine was there through it all.

Bill Clinton is a million times smarter than Trump and was parsing the meaning of "sexual relations" in a specific and lawyerly fashion, not just blathering incoherently as Trump was on Thursday. But even he didn't get away with his dissembling because common sense and a blue dress intervened. Trump lied repeatedly about having sex with Stormy Daniels and Karen McDougal and paying them off during the election. But that's really not at issue; his evangelical voters are fine with that and nobody ever believed him anyway. What is at issue is that Trump appears to have violated campaign finance laws in such an egregious way that the Southern District of New York has essentially named him as an unindicted co-conspirator to a felony -- to borrow a famous term from the Nixon era.

There may not be a blue dress, but the prosecutors almost certainly have the canceled checks. And David Pecker and Barry Levine may have receipts.