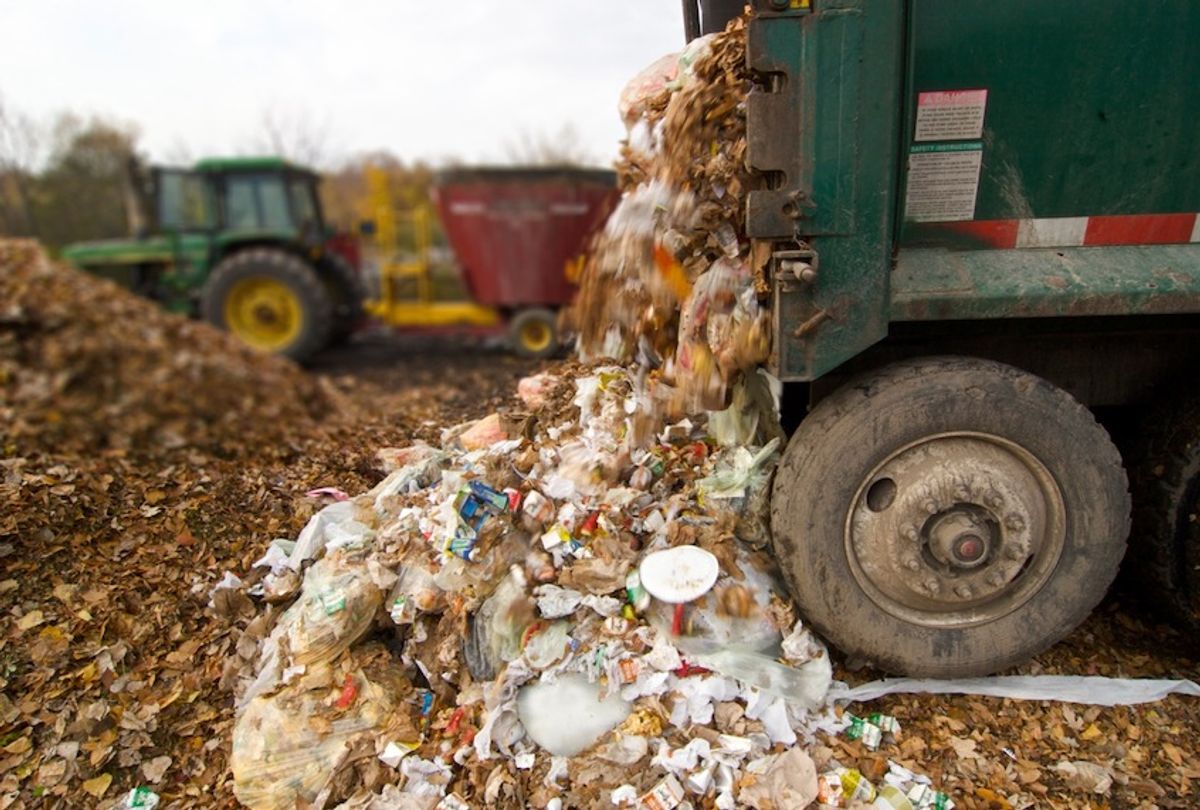 The pile of garbage would look to some like it was overdue for the dump: rotten potatoes, moldy lettuce, wilted bits of carrot and celery, all shiny with the goo from overripe and ruptured melons.

But in this mass of discarded food, Los Angeles County sanitation planners see far more than a waste-disposal problem — they see a resource.

A bucket loader digs into the mass and hoists a load of glop into a grinder. Seconds later, the chewed-up food waste pours into a bin, its first step toward the anaerobic digesters that will blend it with household sewage and use it to brew biogas, manufactured methane suitable for use in running a county wastewater plant. Eventually, officials hope to generate enough of the gas to fuel their waste-hauling trucks, too.

When table scraps break down, they release methane, a potent greenhouse pollutant, into the atmosphere. Because organic waste makes up by far the largest segment of materials sent to California’s landfills each year, state leaders see a lot of opportunity in learning how to harness its energy.

Disposing of food waste in ways that reduce greenhouse gas emissions is a very big — and very expensive — challenge. But county by county, California is a leader in the effort — and its work could serve as a template for the rest of the nation.

For example, state legislators have developed rigorous new waste-disposal legislation centered on Senate Bill 1383, which passed in 2016 and mandates a 50 percent reduction in organic waste disposal by 2020 and a 75 percent reduction by 2025. Currently, the state has some 25 composting yards that accept food waste and 14 anaerobic digesters, says Lance Klug, a spokesman for the state’s recycling agency. Regulators estimate that SB 1383, along with a pair of companion statutes, could require as many as 100 new or expanded organics recycling facilities, a capital investment of up to $3 billion.

One contributor to the food-to-energy project is the University of California campus in Irvine. Anne Krieghoff, who oversees a cafeteria sustainability program there, says participating in the anaerobic digester program has transformed the school’s approach to buying food and disposing of waste.

U.C. Irvine sends some 900 tons of food scraps to the digester each year, and while Krieghoff is proud of that number, she’s also working to reduce the volume of scraps thrown away. “If it’s trimmings from a cantaloupe or pineapple, that’s normal,” she says. “But let’s say we’re throwing away a lot of rotten tomatoes—that might mean either we over-ordered or our supplier isn’t a good supplier. [And] if we find we’re throwing away a lot of lasagna, maybe we made too much, or the students didn’t like it. By tracking things like that, we’re reducing our waste.”

Waste Management, which collaborated with Los Angeles County officials in developing their food-to-energy program, already sees California’s effort as a model, says Susan Robinson, the company’s public affairs director. The company has set up similar food-waste conversion systems in Boston, New York City, and New Jersey, and has another under consideration in Oregon.

Robinson acknowledges that it’s expensive to separate food from the rest of the garbage. But increasingly, she continues, high dump fees, government policies, or a combination of both are prompting creative new uses for food waste.

The project in the garbage sorting facility next to the Los Angeles County Sanitation Districts’ Puente Hills landfill is just one example of statewide efforts to cut greenhouse gas emissions dramatically. California lawmakers aspire to lead the world in fending off the most destructive consequences of climate change, and their solutions have included lofty projects like organizing a global summit and planning to launch the state’s own climate-monitoring satellite.

In the absence of a federal green-waste policy, Nick Lapis, legislative coordinator for Californians Against Waste, says that policymakers nationwide have historically looked to California for models. “We’ve pioneered a lot of recycling policies here,” he says. “I think you’re going to have folks in the recycling world who are going to want to replicate this.”

Despite California’s efforts, most of America continues to send its table scraps to the dump. The U.S. Environmental Protection Agency’s most recent findings show that Americans sent nearly 138 million tons of waste to landfills in 2015. Of that, about 22 percent was food.

California’s figures show only a slightly better rate, with about 18 percent of the state’s discarded food ending up in a landfill. But that figure is the starting place for the sharp cuts in waste disposal envisioned under SB 1383. And some parts of the state are doing much better already.

San Francisco is home to one leading composting program. In 2009, the city became the first in the nation to enact an ordinance making recycling and composting mandatory for businesses and residents alike.

Read more Civil Eats: The Palestinian Chefs Building a Bridge to Their Culture Through Food

Peter Gallotta, a spokesman for the San Francisco Department of the Environment, says a vigorous public education campaign over the years — and spot checks on refuse receptacles by city haulers — have brought near universal compliance. City residents and businesses are required to separate their refuse into three bins: blue for recycling, green for compost, and black for trash. Inspectors with the city trash-hauler check for compliance, and scofflaws face fines.

Six years ago, city officials announced they had diverted 80 percent of all food waste from landfills. Today, that includes sending more than 650 tons of organic material to compost facilities every day.

When the law took effect, “people thought it was going to be challenging to implement, and it was,” says Janan New, executive director of the San Francisco Apartment Association. High-tech companies in and around the city tend to have fairly high turnover, New says, and apartment owners repeatedly found themselves having to explain San Francisco’s rules to new tenants. But, over time, the regulations became part of the enduring culture of apartment living in the city, New says.

Meanwhile, across the Bay

In neighboring Alameda County, StopWaste — the county recycling agency — aims to reduce the proportion of recyclable or compostable materials in its trash stream to less than 10 percent by 2020.

As part of that effort, the agency’s Smart Kitchen Initiative helps restaurants, caterers, and other businesses keep food out of the waste stream in the first place. For a participating business’ first year in the program, StopWaste pays for a digitized tracking system from LeanPath. The equipment includes a scale and camera for kitchen staff to weigh and record what food they’re throwing away. LeanPath software helps categorize that information to show, for instance, whether the food was rotten or the business had bought too much.

Ryan Smith, data efficiency manager at Checkers Catering in the city of Livermore, says some employees balked a little at the extra work required in compiling the records, but they have come to appreciate having specific, real-time information about what they’re throwing away and why.

While some jurisdictions are still working out the details of their programs, StopWaste already has comprehensive procedures for residences, institutions, and businesses and a well-developed public information campaign. That’s produced marked reductions in the amount of food waste in garbage, a success that state regulators see as one model as they work out the rules for implementing statewide policies.

Still, Alameda County officials question whether their solutions to local conditions are right for the entire state.

“We have been out there first, but we don’t feel like we’ve been out there long enough to really say, ‘This is how to do it right,’” says StopWaste spokesman Jeff Becerra. “We haven’t been in a position yet to say, ‘Doing X results in Y.’”

Kelly Schoonmaker, a StopWaste program manager, says in order to achieve uniform waste policy throughout California under SB 1383, regulators are drafting very specific instructions that every local jurisdiction will be required to meet.

“They’re telling you exactly what to do. It’s like a recipe for organics recycling,” she says. “It’s things like ‘Each route will be reviewed quarterly, and there will be five samples from each route.’”

Such procedural and reporting requirements may not fit all jurisdictions equally well, Schoonmaker says, adding that local agencies are calling for more flexibility.

Read more Civil Eats: The Personal Storytelling That is Putting a Human Face on the Food Movement

Members of the Los Angeles County Integrated Waste Management Task Forcehave been grappling with questions such as how to ensure everyone complies with new regulations and who to fine if someone puts refuse in the wrong bin, says Rosemead City Councilwoman Margaret Clark, who serves on the panel.

“Let’s say somebody doesn’t finish a hot dog. The person throws it in the food scraps bin, but it’s wrapped in foil. Somebody has to sort that foil back out,” Clark says. “Who’s going to pay for that?”

Nick Lapis, the environmental activist, acknowledges that California’s new requirements for food composting and recycling into energy in anaerobic digesters will be challenging for local agencies to meet.

“It’s going to be expensive. That said, when you look at it as a greenhouse gas mitigation measure, it’s actually one of the cheapest ways to reduce greenhouse gases,” Lapis said.

“When the state Air Resources Board looked at the costs of different strategies to reduce to reduce greenhouse gases, recycling and composting ended up being a lot cheaper. But there’s also a huge cost to not averting climate change.”