The regeneration of "Doctor Who": Jodie Whittaker's Time Lord proved the naysayers wrong

Making The Doctor a woman necessitates change. And despite sexist wishes for her to fail, she transformed the show 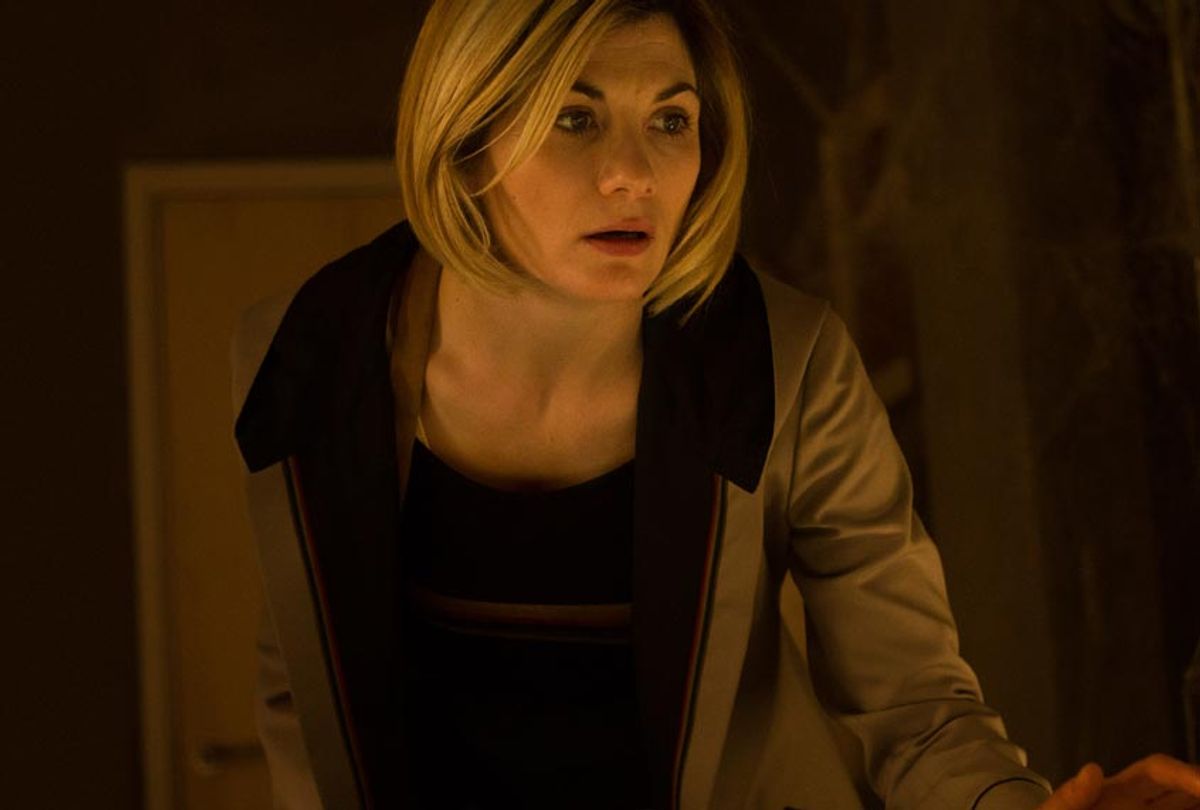 From the moment “Doctor Who” star Jodie Whittaker accepted the Time Lord mantle, a pair of narratives were ready to sprout.

The first assumed audiences would reject a female Doctor after 55 years and 12 men playing the part, ready to blame gendered storylines for any ratings decline. This would be proven wrong by ratings data, but that didn’t prevent a few dumb headlines from popping up as the season’s audience settled into its pattern.

The second, blossoming after Whittaker’s debut, somewhat presumptively rooted around for shortcomings in her take on The Doctor. To be fair, every actor who assumes this role faces some version of this criticism in the beginning – especially every performer who followed fan favorite David Tennant.

With Whittaker, however, a few knocks took on the pernicious tone of bias – perhaps not intentionally in some cases, but there’s a scent of it nevertheless. Multiple diagnoses of Whittaker’s doctor insist that, although she’s doing a fine job, she nevertheless needs to be more of something. More ruthless. More decisive. More action-ready.

In choosing to make The 13th Doctor a woman the franchise by necessity is obligated to address the obstacles a patriarchal world throws in front of women and other marginalized people – like, say, her companions.

Adjunct to this is a concept new showrunner Chris Chibnall plays with throughout Season 11, which came to a close last Sunday. Through this new Doctor, we’re invited to interrogate how our definition of heroics and adventure shifts when a being the audience accepts as the smartest being in any situation happens to inhabit a female body.

If Chibnall and the writers didn’t do that, they’d be dinged for shoving a woman into a man’s suit and ignoring the accompanying implications of that switch, something many genre series do but “Doctor Who,” a series about space-time travel, simply can’t. In the face of danger, science fiction heroines are often enabled by technology or weaponry to level the playing field. The Doctor, on the other hand, has wit, strategy and a sonic screwdriver.

As women the world over have been railing about for the past year, we can wield all manner of abilities with expertise and aplomb and still not be taken seriously. This, in essence, was The Doctor’s prime nemesis in Season 11. Not the toothy murderous, otherworldly predator Tim Shaw, who appeared in the premiere and returned for the season finale, but ignorance.

This foe isn’t a new one for the Doctor, of course. The character’s been around for  55 years and has demonstrated a fondness for visiting past eras. Many of the series best episodes, in fact, are period pieces. But with a dozen dudes having played the part — 13 if you count John Hurt’s character in the 50th anniversary special — the audience takes it for granted that a male Time Lord written by a white man can navigate just about any adventure without having to be concerned about whether his gender will impact his authority.

In “Doctor Who,” Time Lords are creatures of action as opposed to non-interference. The Doctor tinkers with history regularly in the name of fair play and, of course, to entertain viewers. What’s taking some getting used to is the shift in focus of these adventures being centered upon a white male to viewing the universe from multiple perspectives – male, female or gender neutral, via a person of color or an alien from other planets, galaxies and universes.

Season 11 consistently reminds the audience that the 13th Doctor could not take her status as a powerful Time Lord for granted in, say 1947 India, pre-partition, or 1612 Lancashire, or Alabama in 1955.  Nor could Whittaker’s Doctor shield her companions Ryan (Tosin Cole), a black man, or Yasmin (Mandip Gill), a Muslim woman of Indian descent, from discrimination based on their skin color.

Not even Ryan’s white grandfather Graham (Bradley Walsh) could keep him safe in “Rosa,” an adventure in which the Doctor and her companions visited Rosa Parks and were tasked with preserving history regardless of the personal difficulty involved in doing so.

“Honestly,” she fumes at one point, “if I was still a bloke, I could get on with the job and not have to waste time defending myself!” Women have been saying this to themselves for time eternal, which is the point.

Given all of this, Season 11 of “Doctor Who” could not simply be a continuation. It had to be a reset — not merely because the times have drastically changed since 1963, but because culture has as well.

This is the first season that “Doctor Who” has called upon writers of color to create episodes, including Vinay Patel (who penned “Demons of the Punjab”) and Malorie Blackman (who shares a writing credit with Chibnall on “Rosa”).

As such, this also is a season in which the audience is invited to connect more profoundly to who The Doctor’s companions are and what the world means to them, as opposed to discovering them as they discover themselves via their adventures through time and space.

And though a few idiotic tabloid takes attempted to paint Chibnall and Whittaker’s turn in the TARDIS as a ratings failure, calling its “politically correct” plots a turn-off, the ratings indicate the opposite to the true. (Surprise, surprise.)

Whittaker’s debut as The Doctor drew the largest audience for “Doctor Who” in a decade, with 10.9 million U.K. viewers tuning in based on consolidated ratings. Stateside, the latest season attracted more viewers that the first seasons of the Doctors portrayed by Tennant, Matt Smith and Christopher Eccleston, and 20 percent more viewers than 12th Doctor Peter Capaldi’s finale season.

All told, Whittaker’s first season averaged 1.6 million viewers per episode, enjoying a 47 percent uptick in total viewers over Season 10 , a 46 percent increase in adults 18-49 and 32 percent in adults 25-54.

That slaps down that false declarations about a decline in popularity. As for the other critiques about the new Doctor’s shortcomings, many implying in so many words that she and the series need to be more like her predecessors, what one might ask in return is, why?

Gender notwithstanding the defining features of The Doctor are the character’s intelligence, resourcefulness and sense of righteousness, along with their confidence, determination and capability. The Doctor knows she’s clever and refuses to dim that cleverness. She also realizes that her latest regeneration comes with society-imposed implications on Earth that leave her charges more vulnerable than, say, the companions of a galactically entitled white guy may be.

This, in turn, forces the 13th Doctor to contend with a whole new set of challenges previous incarnations were not required to, quite often by appealing to the humanity, and human foibles, of those she encounters and addressing them within herself, or as much as they exist in a Gallifreyan.

Plus, all versions of the Doctor from 2005 onward are, in some sense, extensions of the showrunner in charge. This feels particularly true of Moffat with Capaldi, and one senses that to be the case with Chibnall and Whittaker, who worked together on “Broadchurch.”

If that drama’s hallmarks were its sensitivity to issues of class and culture, one cannot be surprised if the showrunner’s interpretation of the universe is less concerned with finding a new intergalactic foe for No. 13 than exploring the setbacks she and her companions face simply in being themselves.

Another truth of “Doctor Who” is that each new version requires a season to establish a connection with audiences. Chibnall’s take chooses the more complex route of fleshing out the season’s ensemble almost more than the Time Lord herself; we know the basics of who she is, after all. As for her quirks and behavioral traits, if she’s discovering them as she goes, so be it.

BBC has confirmed that Chibnall and Whittaker will be returning to “Doctor Who” for a twelfth season, although it won’t debut until 2020. This may surprise fans a bit more that the shift from the traditional Christmas episode to a debut on New Year’s Day, but allowing time for production to proceed without rushing the pace isn’t unheard of in this series or others.

Besides, if there’s one wish that I have for new episodes of “Doctor Who,” it is that Chibnall and his team relaxes into the fun of this universe a lot more. Surely he and Whittaker embarked on this journey with a pressure at their backs to succeed to spite the naysayers, and they’ve done that. And now that The Doctor knows what kind of setbacks time travel through her beloved Earth’s history may present to her, we’ll see some new edges emerge in the show’s tone.

“Travel hopefully,” No. 13 says gently in the season finale. “The universe will surprise you.” Whittaker’s and Chibnall's successful command of this season, however, is no revelation at all. Presented with a heavy lift, they showed how to hold The Doctor’s power brilliantly, even when the times and human laws are aligned against her. Though it'll be a while until the next season takes off, the 13th Doctor has more than made the case for continuing to be a passenger on this trip.