The new "Doctor Who" review: Jodie Whittaker takes control of the TARDIS

The 13th Doctor makes her debut on Sunday, and she’s made of "adrenaline, dash of outrage, and a hint of panic" 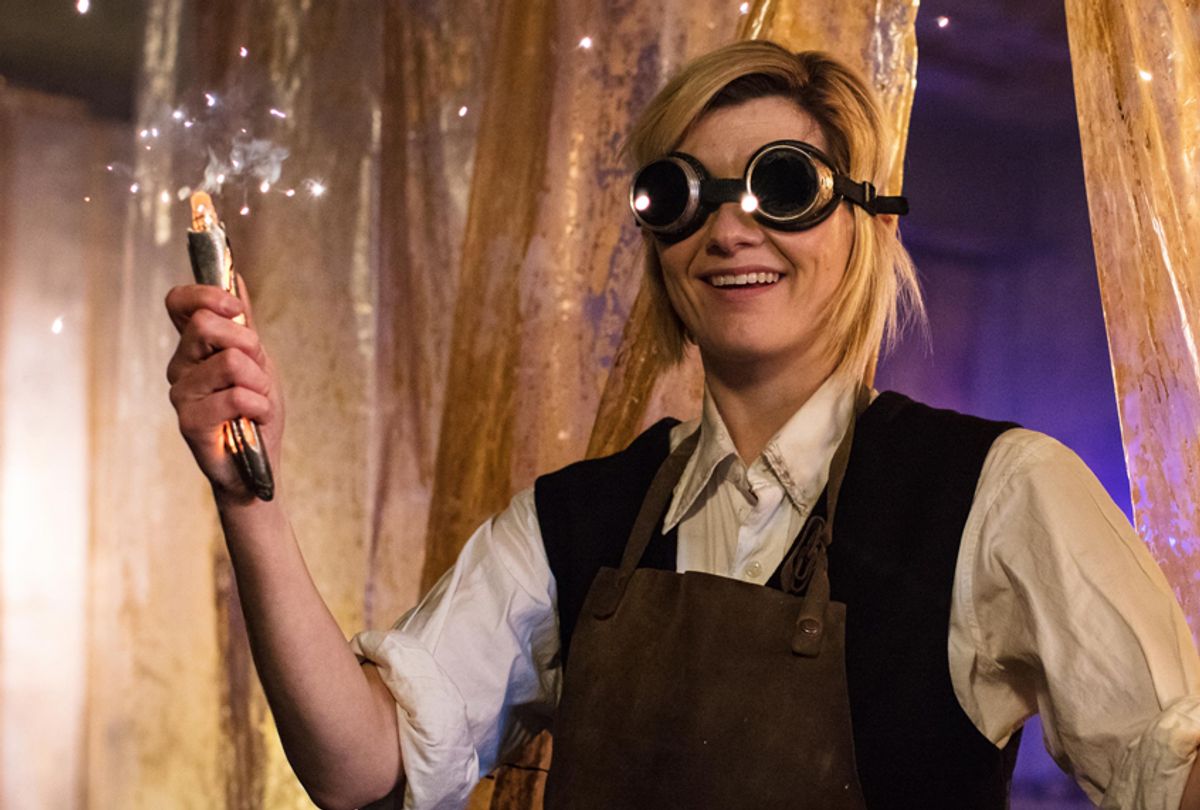 Jodie Whittaker as The Doctor in "Doctor Who" (BBC/Sophie Mutevelian)
--

“The silly old universe. The more I save it, the more it needs saving. It’s a treadmill. Yes, yes I know: they’ll get it all wrong without me.”

Whenever a creator speaks to the audience through his art, pay attention.

Previous “Doctor Who” showrunner Steven Moffat wrote those words for the 12th Doctor in “Twice Upon a Time,” the 2017 Christmas episode in which Peter Capaldi handed the Time Lord mantle over to Jodie Whittaker.

“Twice Upon a Time” represents Moffat’s swan song as well as Capaldi’s. Although he never expressly said so, Moffat was never going be the man to usher in a woman Doctor. He’s an innovator when it comes to modernizing stories, but regarding the bones of a character, he’s very much a traditionalist. The Doctor has been male since 1963. The Doctor has been idolized by the young and young at heart for 55 years. Passions over traditions, over anything accepted as immutable truth, die hard. Maybe you've noticed.

“They’ll get it all wrong without me.” Capaldi’s Doctor says this to an audience of one, his beloved TARDIS, but it might as well have been Moffat speaking to the fears of the men in the audience railing against the casting of Whittaker as the Thirteenth Doctor and the first woman to assume the role.

Tenth months later, new “Doctor Who” showrunner Chris Chibnall answers him, gently but firmly, through Whittaker. “There’s this moment, when you’re sure you’re about to die. And then, you’re born. It’s terrifying,” the 13th Doctor says.  She proceeds to describe the odd sensation of being a stranger to herself, torn between the shade of who she once was and the call of who she needs to be.

Soon after, she shrugs it off. When the world is at stake, what the individual does matters more than the individual's identity. “When people need help,” she states, “I never refuse.”

Whittaker officially makes her debut Sunday at 1:45p.m. ET/ 10:45 a.m. PT on BBC America, airing at the same time as the premiere's UK broadcast. And as I previously wrote, her assumption of the role is not merely historic due to her gender.

Whittaker’s Doctor is the hammer shattering a longstanding sci-fi boundary that tends to relegate women to the roles of logicians and scientists, usually protected by a man. Physical power in female science fiction characters is often attributed to supernatural or technological endowments. Heroines who are human, meanwhile, tend to have their femininity neutralized.

Even realized as a man, The Doctor never had super strength or flight or any of the bells and whistles typical of the comic book universe. The Doctor represents supreme intelligence. The Doctor outwits enemies and is dedicated to maintaining cosmic equilibrium. It’s a treadmill alright.

Walked past a gym lately? Women pound those machines as well as men do. And Whittaker breezes through her initial run on this one — although I have to say, this Doctor is a fashion tragedy. (If her colorful get-up seems familiar to you, that’s because it’s nearly identical to the one worn by the late Robin Williams in “Mork & Mindy.” Shazbot!)

BBC America made Whittaker’s premiere available to critics with a number of embargo requests that basically prevent us from describing much about the plot or how specific details of her Doctor’s arrival are resolved.

A reminder of where the story left off helps, though: moments after her transformation, the new Doctor is tossed from the TARDIS, a craft that travels through time and space and resembles an old school police box, and watches in horror as it vanishes.

The other clue of what happens next is the premiere episode’s title, “The Woman Who Fell to Earth.”

Whittaker’s casting pre-dates the uprising born of female empowerment shaking the United States right now, so the timing of her arrival in “Doctor Who” is purely coincidental. How Chibnall, who worked with Whittaker on the critically acclaimed crime drama “Broadchurch,” establishes what sort of Time Lord Whittaker turns out to be is completely intentional.

All “Doctor Who” episodes turn on universal themes; “The Woman Who Fell to Earth” follows this pattern, amplifying messages of capability, self-worth and yearning above all. But it’s also about fear, and the importance of staring it in the face, refusing to looking away and most importantly, taking it on.

Like all Time Lords post-regeneration, the 13th Doctor takes a moment to get her bearings, but even in her scrambled state, she’s formidable, resourceful, a problem solver. As she puts it, she’s made of “adrenaline, a dash of outrage, and a hint of panic.”

Why, if she didn’t have two hearts and the ability to metamorphose upon collapsing at death’s door, we’d call her the 2018 edition of a human, only wiser and with a more even temperament. This Time Lord doesn’t merely stand for fair play, she also thumbs her nose at ignorance. Or rather, Chibnall does.

Again, without violating that embargo and, just as importantly, spoiling the thrills of viewing this episode’s new and frightening adversary, in a key moment the Doctor offers and asks for empathy, using her recent travails as an example.

“We can evolve while still staying true to who we are,” she says.  “We can honor who we’ve been, and choose who we want to be next.”

Whittaker beams with joy and confidence and a smattering of comic derring-do reminiscent of past interpretations of the intergalactic hero’s personality.

The haters are going to hate her. Who cares? There’s nothing to be done about that.

More importantly, Chibnall obviously doesn’t give a whit about winning over anybody still ticked off at losing yet another one of their white male childhood superheroes to — insert sarcastic tone here — feminism.

He goes a step further – even though modern episodes of  “Doctor Who” reflects the world as it is,  a place where people of all ethnicities are shown living and loving and, yes, running for their lives, Chibnall gives Whittaker’s Time Lord three companions, two of whom are people of color: Ryan (Tosin Cole), Yasmin (Mandip Gill), and one an older white gentleman named Graham (Bradley Walsh).

They are all survivors of one variety or another, connected by a very specific cord of female strength, and the refusal to give up.

The 12th Doctor left specific instructions for his successor, by the way. "Never be cruel. Never be cowardly. And never, ever eat pears!"

Then, he says, "Remember: hate is always foolish and love is always wise. Always try to be nice, but never fail to be kind. Oh, and you mustn’t tell anyone your name. No one would understand it anyway. Except children. Children can hear it sometimes."

Time Lords are perpetually fascinated with humans, Earth in general and Britain, specifically. Whittaker maintains this wonder, following her previous incarnation's advice while tempering it a warmer sense of understanding. She’s a traveler, she tells her charges with a smile.

“All of this is new to you,” the Doctor remarks at one point, “and new can be scary.”

Not this time. So far, she's getting it right.