Damon gave "SNL" one of its best episodes in recent memory. But the show needs an identity beyond A-list hosts 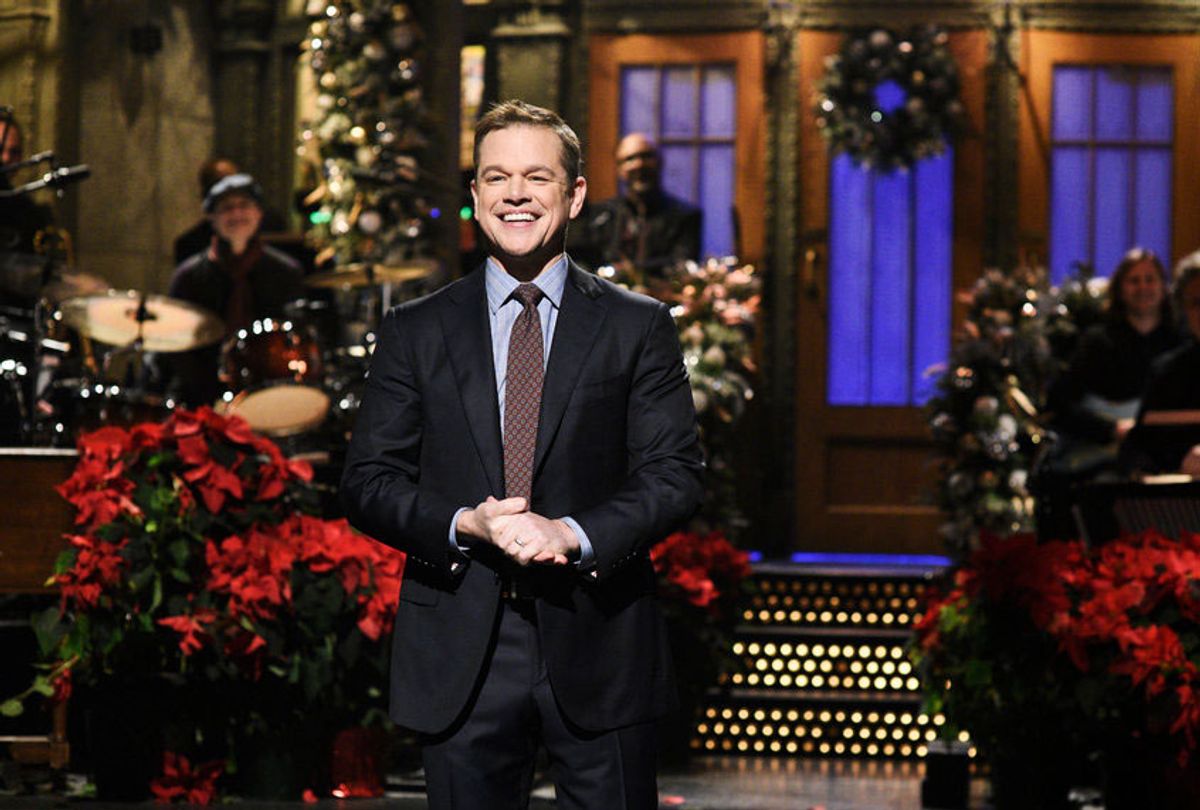 As “Saturday Night Live” closes out 2018, its 44th season has at long last found the breakout player: Matt Damon. Not a repertory player, a guest. And a very occasional one at that.

Damon has been a strong contender for that prize since the season opener, when he thrilled audiences by stepping into the tight shoes of Brett Kavanaugh, pre-Supreme Court confirmation. Singeing the audience with his version of entitled white guy anger, Damon’s Kavanaugh opened by yelling, “I'm gonna start at about an 11, and then I'm gonna take it to a 15 real quick!”

Damon’s Kavanaugh impression returned last weekend when “The Bourne Identity” star hosted the season’s ninth episode but, unlike his premiere cameo, this time Kavanaugh barely rated compared to the rest of the episode. His whooping, emotionally unstable Kavanaugh joined Ben Stiller’s Michael Cohen, Robert DeNiro’s Robert Mueller and naturally, Alec Baldwin’s Donald Trump in a political parody of “It’s a Wonderful Life.” In it, the angel Clarence (Kenan Thompson) shows Trump what the Beltway would look like if he hadn’t won. (A lot happier, is the short answer.)

But in this reverie, Damon’s Kavanaugh was merely a walkthrough, just like all the other celebrities playing the “SNL” version of the White House’s “not ready for prime time” players. Since Baldwin first assumed the role of Trump the candidate, then went on to play Trump the doltish, feckless president, the late-night sketch series’ politically topical cold opens have been the clips to watch, even though they lost their comedic bite months after Trump’s inauguration.

Nevertheless, they’re still more likely to be the subject of Monday morning analysis than almost everything else that follows a typical monologue. Indeed, anything that goes viral and doesn’t feature the host in a central role is more or less a happy surprise these days.

Which brings us back to Damon and the ninth episode, a chapter that embodies everything that’s working and all that’s gone wrong about “Saturday Night Live” in its current incarnation. Damon was terrific, capping the 2018 run of “SNL" with one the season’s strongest efforts, if not the year’s best. But without him, the cast would be rudderless and married to wan political humor, which is not this staff’s forte. And this is particularly disappointing because this season’s cast boasts a number of strong performers besides clinch player Kenan Thompson, whom NBC has been pushing in the media with vigor to announce his readiness to transition into a post-“SNL” career, and Kate McKinnon, who is in the final year of her contract.

Those two, along with Aidy Bryant (starring in Hulu’s upcoming series “Shrill”), Leslie Jones and Cecily Strong are ready to launch, and none of them have a character or recurring bit to take to theaters when they do. The side effect of Trump and diluted political jokes consuming all the air in the “SNL” universe is that the larger franchise itself is a weaker springboard from which its stars can leap, and yet the writers believe the audience cares enough about Pete Davidson's personal life to make him worth featuring a lot more this season. That's a mistake.

In place of establishing a foundation for lasting industry success, then, most of the current group is there to make the host of the week or the celebrity guests look great . . . and not much else.

That said, Damon triumphed in his own right, largely due to the writers’ choice to lean into holiday sentiment as opposed to punching up at brainless piñatas.

(The show also deserves credit for resisting the urge to replay the previous Tuesday’s showdown between Trump, House Speaker Designate Nancy Pelosi and Senate Minority Leader Chuck Schumer in the White House. Several cable news commentators likened the event to an “SNL” sketch, which was a clue to shy away from what was, by the weekend, no longer low-hanging fruit but a rotten ground harvest.)

This was Damon’s second time hosting “SNL.” The first time happened 16 years ago or, as he puts it in terms the average audience member understands, “five ‘Jason Bournes’ ago.” His monologue forgoes punchlines for genuine nostalgic appreciation of what the show means to him, telling the story of how his own father allowed him to stay up to watch starting when he was eight years old. He wasn’t appearing on “Saturday Night Live” last weekend to promote anything, he stressed. He just wanted to be there.

Aside from the reviews, Monday’s other significant “SNL”-related news was the Top Google Search Result for Idiot-in-Chief’s Twitter threat to take legal action over what he perceives to be defamation. But to be honest, that “It’s a Wonderful Life” open won’t be what most people will recall from the ninth episode. Instead, most hearts belong to Damon’s angelic daddy in the “Best Christmas Ever” sketch.

In it Damon’s dad and his wife (Cecily Strong) gloss over the hellacious effort and tongue-biting that goes into surviving any family holiday celebration, thinking of the day as how they wanted it to be as opposed to the disaster it actually was.

What’s great about that is one might also think of it as a metaphor for this show.

Damon’s best “SNL” moments display his enthusiasm for self-parody. He can turn on the charm when he wants to, but he can also break up the room by prancing the floor as the dark horse contender at “The 85th Westminster Daddy Show,” — “a dog show, but for daddies,” McKinnon’s announcer explains. “…Any man can be a father, but it takes a hot, middle-aged guy with a big job to be a daddy.”

Throughout Saturday night’s episode, the writers play up Damon’s off-screen persona as an affable father of four, making us want to be on his side from the get-go. At the same time, it’s also hard to forget he’s a daddy of sorts who makes questionable statements that reveal he’s acutely aware of his status as a top-shelf beneficiary and practitioner of paternalism.

Anyway, both of Damon's faces explain why his appearances in the current season, both as angry Kavanaugh and Saturday’s amiable family dude, work so well.  In short, he’s a likable guy who has been around enough thoroughly detestable white guys to channel their most loathsome qualities. He’s a dropout, yes. But he’s a college dropout, and never forget that college was Harvard.

Beyond that, Damon’s second “SNL” visit was mostly memorable for the visiting star’s gravitational pull.  Like all holidays and “Saturday Night Live” guests, Damon is a temporary pleasure. The writers still have yet to fix whatever is stalling the momentum the show enjoyed at the outset of the Trump era.

“SNL” hasn’t allowed its best hitters to develop impressions that can stand the test of time for a few seasons now, as Will Ferrell was able to do with his version of George W. Bush or Amy Poehler achieved with Hillary Clinton or Tina Fey slammed dunked with her imitation of Sarah Palin.

Nor are there characters or recurring skits that are specifically evocative of the franchise, like Kristen Wiig’s Gilly or, to take it way back, Mike Myers’ and Dana Carvey’s “Wayne’s World” or “The Californians.”

That said, there are glimmers of hope in that department; Strong, in fact, enjoyed a few banner moments in this episode, the best being her Broadway singer Dianne Gellerman busting out her own rendition of Barbra Streisand’s rapid-fire paced “Jingle Bells” without passing out from hyperventilation.  And Heidi Gardner’s Angel, the exhausted boxer’s girlfriend from every boxer movie, seized the moment in Saturday’s “Weekend Update” even before Damon appeared as her frustrated mate Tommy.

But one doubts the staff will write content for those women that develops those characters beyond the odd one-off bit every now and then, because the series has gone all-in on political satire, a pageant in which they’re greatly outmatched.

The stagnation of political humor “Saturday Night Live” has been a problem since Baldwin’s lampooning of Trump stopped being novel. Part of the problem is overload; by Saturday night, most of us have exhausted our reserves of horror at whatever that week’s example of the White House’s worst behavior might be.

On top of that all the best takes have already been distilled and digested, whether by Stephen Colbert on CBS’s “The Late Show,” or Comedy Central’s “The Daily Show” or NBC’s “Late Night with Seth Meyers,” hosted by a former “SNL” writer and one of the quickest minds in the topical humor game.

Whatever “Saturday Night Live” has to add to the conversation must be novel enough to break through the clamor. And in order to do that, the series has to nurture unforgettable characters for its players instead of continuing to rely on the good graces of whichever A-lister is in the mood to drop in that week, plus McKinnon’s Emmy award-winning versatility.

McKinnon is extraordinary at impressions, so much that she’s the show’s go-to for just about ever major political goofball out there, sometimes several within the same episode. And while being the only game in town has been very good for McKinnon, it doesn’t portend great things for the franchise at large. But to be fair, this has long been a problem with “SNL,” pretty much ever since Lorne Michaels discovered that Fred Armisen could play, well, anybody.

As such, you may have forgotten that McKinnon did a famously awful impression of Robert Mueller before the show roped in DeNiro for the job. She’s also played Lindsey Graham, Jeff Sessions, Hillary Clinton, Elizabeth Warren, Kellyanne Conway, Nancy Pelosi, Betsy DeVos, Angela Merkel and Ruth Bader Ginsburg, her best characterization.

We were treated to one of her lesser impersonations, that of Theresa May, in an awkward end-of-the-show sketch that dropped into oblivious midway through. That it was included at all is an interesting choice, given that Andy Serkis circulated a bit earlier that week portraying May’s inner conflict in the manner of Gollum from "Lord of the Rings."

There was a time when “Saturday Night Live” might have been so creative — perhaps, say, in 1978 when Damon would have first become a fan. That was the era of Dan Aykroyd and Jane Curtin trading barbs in their "Point/Counterpoint" segment, John Belushi, Bill Murray and Gilda Radner thrilling audiences, and it featured the rise of a writer and comic named Al Franken. And it could be that the A-lister channeled some of that old “Saturday Night Live” magic last weekend, a chemistry far longer lasting than the week’s headline horrors or a political bump.

“Saturday Night Live” is on its winter break now, and when it returns, the campaign for the presidential race in 2020 will be in its nascent moments. If the show is smart, it will resist the urge to look outside of Studio 8H to find its Beto O’Rourke or Kamala Harris, and will carefully construct all the other characters falling into formation in the trail from within its own ranks.

Even better, the show could usher in 2019 with a resolution to create characters and corners that audiences will crave visiting time and again, as it did in the old days before Trump ruined everything. Because given the choice to gaze into its Oval Office yet again or spend time in a basement, I’ll choose “Wayne’s World” every time.