Steve Carell and Robert Zemeckis on "Welcome to Marwen," process, pretension and pain

Salon talks to the duo about making "Welcome to Marwen," fear and flying 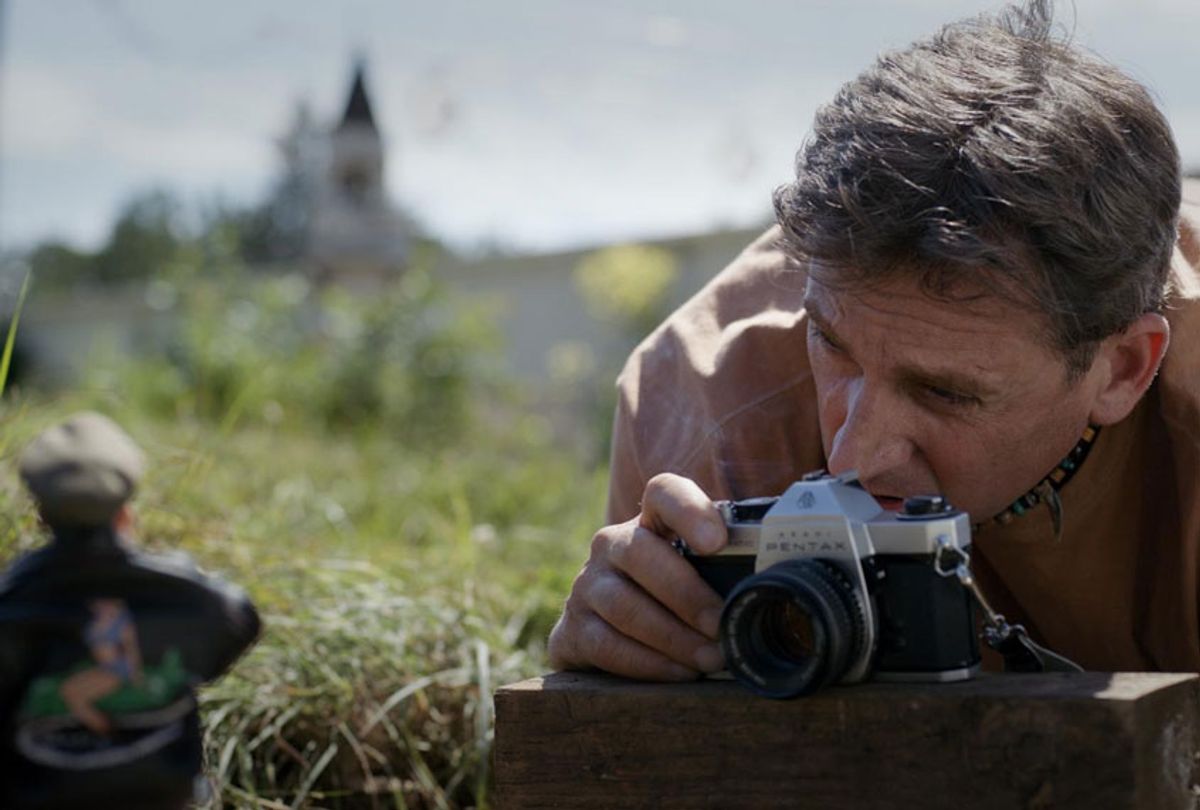 “Welcome to Marwen” is Robert Zemeckis’ spirited feature film about the real-life artist Mark Hogancamp (Steve Carell), a man who suffered a brutal attack that left him physically and psychologically damaged. Hogancamp struggles with brain injuries, memory loss, and — once an artist — is now unable write his name or draw. His remarkable, inspirational story, which was previously told in the 2010 documentary “Marwencol,” concerns how he copes with his trauma. Hogancamp built a 1/6-scale model of a Belgian WWII town in his backyard and populated it with Barbie dolls and action figures. He photographed these models — who are all based on people he knows — to create artworks. He even had a show at a downtown New York City gallery.

Zemeckis brings this mix of fantasy, harsh reality, and therapy to the screen by creating elaborate motion capture sequences featuring female dolls saving “Hogie” (Mark’s action-figure alter ego) from Nazis. “Welcome to Marwen” juxtaposes these scenes with moments where Mark is haunted by his trauma in real life. A courtroom scene, where his inner demons get the best of him is particularly effective. Carell shines in the double role, calibrating his voice and body language in ways that distinguish the timid, injured Mark and the fictional, heroic “Hogie.”

“Welcome to Marwen” also shows how Mark gains confidence by making a romantic connection with his new neighbor, Nicol (Leslie Mann). It is through his relationship with her that Mark reveals the cause of the attack on that fateful night.

Zemeckis and Carell met with Salon to talk about their unique film, action figures, pain, trauma, and coping, as well as how they find their bliss.

Robert, you often mix fantasy and reality in your films. Can you talk about your interest in this and how you created “Marwen”?

Robert Zemeckis: It came from the story. In Mark Hogancamp’s life, he imagines this world that he takes these still photographs of. So, I thought a really interesting movie would be to bring that world to life. Let the audience see inside Mark’s imagination what was going on. That was the initial inspiration.

All of moviemaking is putting pennies on a balance beam — you have to feel it. There is no hard and fast rule. Making a movie is like creating music. Movies have rhythms. What I find over the years, is the rhythm is ultimately generated by the cast. What I like to do is find the performance rhythm of my cast and stay true to that. If you see films that are over-edited, they just don’t have a confident feeling to them. But I rely on my performers. I don’t like to edit, and I’m fortunate that I work with actors that I don’t have to edit around. I let the camera play and I edit as the story demands.

How did you visually conceive of the film?

Zemeckis: It’s all done using an advance generation of performance capture. Each doll is inspired by a real-life person Mark knows. That actor plays each doll and their entire human performance is wrapped digitally around the doll.

Steve Carell: That was the intent, certainly, to differentiate the two but have them connected in some way because they are the same person — Mark and “Hoagie” are connected. Hoagie is just the idealized version and I thought about what Mark might envision as his heroic voice and his swagger, his heroic physicality. I tried to distinguish between the two.

Yes, the injured, real-life Mark, has a different physicality to him because of his trauma.

Carell: Yes, a lot of his physicality is attributable to his attack, but I didn’t want to overplay that. It’s hard to talk about the physicality. I don’t want to be cavalier about playing a real-life person. In meeting the real Mark, I never wanted him to feel that I was conducting a science experiment in order to glean characteristics. I just wanted to get to know him on a personal level. There is definitely a different physicality between the real-life character and his alter ego.

Did either of you ever play with action figures or Barbie Dolls?

Zemeckis: I actually missed the G.I. Joe phenomenon. My sister had Barbie dolls, which I didn’t play with, but when G.I. Joe came out, I was a little too old for that. But when I was a kid, I did do puppetry — hand puppets, and marionettes, and that sort of thing. When I was a really little kid, I loved kid shows that had puppet characters. I grew up in Chicago, so we had “Garfield Goose” and “Kukla, Fran, and Ollie.” I’m going way back! Hey, so, I’m still playing with puppets.

Carell: I remember “Kukla, Fran, and Ollie.” Growing up, my brothers and I had an action figure called Major Matt Mason. It was like a space version of a G.I. Joe. If you can find it, Major Matt Mason is the real deal.

Zemeckis: You know, they don’t call them G.I. Joes in England? They are called “Action Man,” because G.I. means nothing except in the U.S. I learned that when I was over there recently.

Pain can be good, says one of the film’s characters. I was inspired by Mark’s story as a way of coping with trauma. Can you discuss a trauma you’ve had and how you worked through it?

Carell: I don’t think I want to talk about a personal trauma that I have gone through or worked through, but I think everybody has traumas in their life, be it major or minor. I think everyone has different coping mechanisms. For example, I can’t think of a funeral that I have been to that didn’t involve laughter, and I think that’s a coping mechanism for grief and pain. I think that’s pretty common. But Mark definitely has a different, unique, and inspirational way of coping.

Zemeckis: If you want to take the movie and put it into deep psychological therapy . . .

Zemeckis:  . . . and try to get to the bottom of what I think is one of the things that movies that are about something, do better than anything . . . coming to the acceptance that pain is a part of life, and our life mission is — and I certainly have never, gratefully, have ever gone through anything as tragic as Mark has — in my opinion, every human’s life’s work is learning to accept pain as an inevitable part of life. I think everyone who tries to avoid pain, that’s the dilemma, the problem. When you start to avoid pain, it becomes more painful. It’s all about accepting life on life’s terms, if you will.

Steve, you have played several damaged characters as well as several real-life people. What was it like to walk a mile in another man’s shoes?

Carell: It's so weird talking about process. I find it difficult because, no matter what, you always come off sounding incredibly pretentious when you start talking about acting process and method. That being said, to try to respond to your question, I think I try to approach it as I would any character, damaged or not damaged. I look for the — I was about to say “truth” but that sounds so pretentious! I try to look for what feels real about it, and this is a real guy, so that was easy.

I got to meet the real guy and get to know him, and I got a sense of his essence, not only through the documentary, but our interactions and my subsequent emails and texts and phone calls with Mark. I try to get a sense of the humanity of a person, and again, not to try to pick apart the physicality, but to get a sense of who he was before [the attack], and how this affected him. Here’s an example: he emailed me the other day that he did a Q&A after a screening and he didn’t use a microphone because he doesn’t like his voice to be any louder than anyone else’s. I thought that was such a profound statement, and very telling, because that encapsulates so much of who he is. He’s humble, and kind, and generous, and doesn’t want to take up more space than is allotted in life.

I think that stems from his abuse — that Mark is scared or feels threatened. It’s fear.

Carell: I think you’re right. So much of his life is definitely fear-based. How could it not be, given what he had to endure? I thought that was a telling statement. He’s very magnanimous. He doesn’t want to impede upon anyone else’s life and in that way. He is very private as well.

Robert, this is the second documentary you’ve turned into a feature, after “The Walk.” Why re-tell these stories?

Zemeckis: No, no, no. The first one, [“The Walk”] was way in production when that documentary [“Man on Wire”] came out. Unfortunately, these movies are a long process, and that documentary won an Academy Award, so everyone assumes “The Walk” came after that documentary, but it was a collision of circumstances.

“Marwen” is the only movie I have made that was inspired by a documentary. I didn’t retell the story. I based this movie on events that are depicted in the documentary, which, of course, is what really happened to the real Mark Hogancamp. What I saw was . . . I was very moved by Mark’s heroic journey and his powerful story of healing, but I thought that the thing that a movie could do that no other art form could do, is bring the imaginary world that was in between Mark’s photographs to life. I think that’s the kind of thing that movies can do better than anything else.

What are your creative outlet or endeavors outside filmmaking?

Zemeckis: I don’t know if it’s a creative outlet, but I’m a pilot.

My father used to fly planes, but he didn’t drive a car.

Zemeckis: I’m a great pilot, but my wife thinks I’m a shitty driver. Go figure! I’m one of these very fortunate people who gets to have a creative outlet that’s his occupation. What I like about flying is that you are certainly in the moment. When I’m flying, I’m not thinking about the calls I have to make when I land.

Zemeckis: My mind does not drift off the task at hand when I’m flying.

I’m going to have to look at all of the planes and flying sequences in your films!

Zemeckis: Want me to list them off? How about the fact that there are always crashes?! What am I, warding it off in my art? There are plane crashes in “Marwen,” “Flight,” “Castaway” . . .

Zemeckis: I think because I’m a pilot, I can do the crashes really well. They aren’t silly. Sadly, I know what it would really be like. I don’t want to go there. I’ll do that in the movies.

What about you, Steve?

Carell: Skiing. I get that same sense of freedom, and there’s a sense of solitude as well. Just you, hearing the crunch of the snow under your skis, breathtaking views, fresh air. I love it. Every care in the world — not that I have that many cares in the world — just really disappear.