Another crazy Christmas with Donald Trump: But he can't wreck it, because he doesn't understand it

Through his sheer vanity and ugliness, the president may help us hold onto what remains of the Christmas spirit 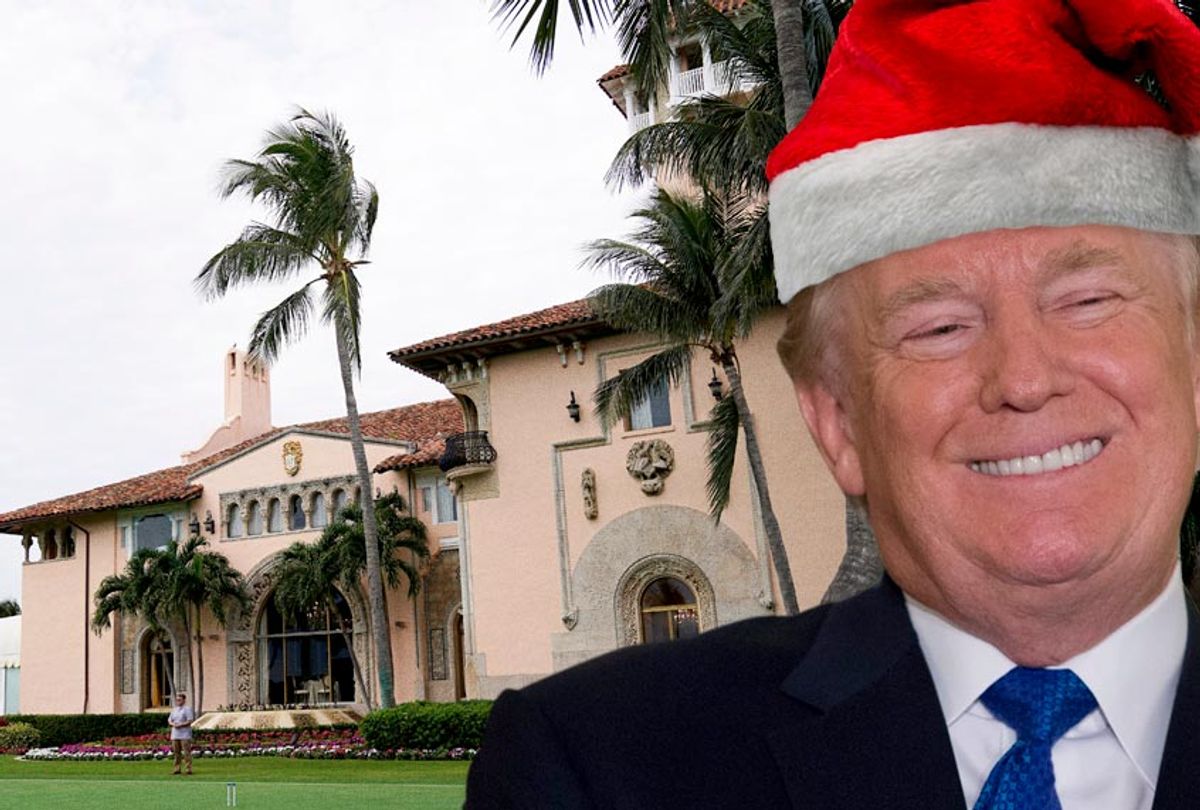 This is America’s third Christmas under Donald Trump, at least if we count the surreal, dream-state holiday season of 2016, when Trump had been elected, Barack Obama was still president and many of us were trying to pretend none of it had happened. I keep thinking they can’t get more bizarre, and I keep being wrong.

As I write this, we are just hours past the winter solstice, the darkest moment of the year and the beginning of the long, slow climb back toward warmth and light. That can seem more symbolic than anything else: The coldest weeks of winter are still ahead of us, especially in a changing climate of erratic extremes. (On the morning of the solstice, it was 63 degrees where I live, a few miles northeast of Manhattan.) But the days will get longer, no matter what: It’s an important turning point in the terrestrial cycle, observed far back in prehistory through rituals we only partly understand.

In some northern European cultures, bonfires were kept burning all night long to await the sun’s return, or perhaps to make sure it did return. We keep those pagan festivals alive in the form of trees festooned with electric lights. (There's one I drive past every morning, along a modest stretch of Mosholu Parkway in the Bronx, that has a serendipitous effect Rockefeller Center cannot match.) The great pre-Celtic passage tomb known as Newgrange, in Ireland, was built more than 5,000 years ago such that the midwinter sun at dawn would penetrate its deepest chamber. Although we know nothing about the builders' theology or cosmology, the reasons for that are intuitively obvious.

As these ancient traditions merged with the legends of Christianity, the interplay of light and darkness remained important. Even the Roman Catholic Church does not claim to know the month or year when Jesus was born; Christmas is described as a “traditional feast day” to honor the savior’s arrival. But it came upon a midnight clear, with a bright star blazing in the heavens and the manger lit by candles. In some versions of the tale, angels make announcements to travelers, descending in heavenly sheaths of light. Bethlehem doesn’t often get snow, but at least in college imagination it was a cold night in that emergency shelter, warmed by the breath of animals and the force of miracle.

However you make sense of the story of the Son of Man and its intersection with the turning of the solar year, their intermingling is no accident. Whether or not you are religious in the modern meaning of that word, this is a season of contemplation and celebration, of family gatherings in lighted caves, of reflection on everything that connects us and everything that dies, is born again, renews and continues. That part of it, at least, reaches deep into our primordial brains, or our species DNA. We witness the death of one year and the birth of a new one, which cannot help but remind us that we are all here for only a short time but that life, somehow or other, will go on.

I don’t need to tell you that all of this is lost on Donald Trump, whose close association with evangelical Christianity has revealed the moral bankruptcy of that entire movement. Frankly, I’m sorry I have to bring him up. As you already know if you’re reading this, the president whose boundless vanity cannot tolerate anyone else, or anything else, being the center of attention is determined to hijack Christmas 2018 and turn it into a spectacle of his own self-immolation, or another episode in his startlingly successful campaign to render America a mockery of itself.

There is a partial government shutdown, staged either to get billions of dollars out of Congress for a border wall that will never be built and no one actually wants, or to make Ann Coulter love him again. (My money’s on the latter.) Stock prices are in free fall, and Wall Street has officially entered a “bear market” following its worst week since the Great Recession of 2007-8. Trump abruptly decided to pull U.S. troops out of Syria and Afghanistan, which might well be the right decision made for the wrong reasons, and without any semblance of strategy or planning. That finally drove Defense Secretary Jim Mattis out of the Pentagon, which — at least according to the mainstream media narrative — leaves the president surrounded only by zealots and toadies, freed from adult supervision.

Behind or above all this, there’s the sense that Robert Mueller’s long-running investigation, which has begun to resemble a series of clues that all lead in different directions, has taken an important turn. While the depth and character of Trump’s Russian connections remain as mysterious as ever, everyone in the country can feel that the boundless criminality of his entire career is beginning to catch up with him. Trump’s defenders argue that the campaign finance violations revealed by Michael Cohen are surely not grounds for impeachment, and they’re right. But the larger portrait being unveiled by Mueller and federal prosecutors is of a man who has committed numerous crimes, large and small, over many years, and who assumes that’s simply how the world works.

One could argue that a Trumpified Christmas of bitterness and chaos, with a petulant president who shuts down the government, retreats to his godawful Palm Beach resort and refuses even to pretend to observe the seasonal rituals of nonpartisan beneficence, is no more than we deserve. As we are all acutely aware, Christmas itself long ago became an orgy of marketing and merchandising, wedded to painful travel experiences and awkward family gatherings. It exists as a season of introspection, discovery and renewal mostly in simulated form, in beloved stop-motion TV specials, endless retellings of “A Christmas Carol” (here are a couple of good ones you may not have seen) and the troubling ambiguity of “It’s a Wonderful Life.”

Trump is not necessarily wrong, after all, in his über-Scrooge belief that rich people’s crimes drive the world’s economy. Much of what his fans appear to love about him is that he makes no serious effort to hide his greed, cruelty, shallowness and lechery. His almost explicit question to Americans is: Why pretend to believe in anything? Why pretend to be better than we are? He would answer Abraham Lincoln’s famous rhetorical query about whether a nation “conceived in Liberty, and dedicated to the proposition that all men are created equal” can make it in this rapacious world, is pretty much STFU LOL.

Whether Trump himself believes in any of his so-called policies or half-baked promises is, I suspect, a meaningless question; he believes only in his own glory, reflected back at him by others. Whether his followers actually believed Mexico would build the wall, all the factory jobs would come back from China and America would become “great again” is difficult to say. I think they believed it in exactly the way a 10-year-old believes in Santa Claus: Amid the cognitive dissonance and the creeping awareness that the whole story makes no rational sense, there lingers a spark of faith. For some of us, that spark becomes the first awareness of the power of symbol and metaphor; for some of us it just turns to cynicism.

As I have argued repeatedly in this space, Donald Trump is not the fundamental problem with America; he’s like a tumor or opportunistic infection that took advantage of our weakened national condition. But there is no question his presidency has debased and demeaned us, revealing things we didn’t want to look at but probably needed to see.

One could argue that Trump is less of a hypocrite than leading Republicans of the recent past, who pretended not to understand that their voters craved a spectacle of cruelty and bigotry and had no actual interest in “conservative” principles or policies. The late George H.W. Bush, a decent and dignified man who tolerated a growing current of vicious racism in his party (in pursuit of policy goals that were dubious at best), offers an obvious case in point.

But we respond very differently to Bush and Trump, I think, because in the former case we identify with the universal human pathos of aspiring to better things, and the universal human tragedy of falling short. Both of those things are entirely alien to Trump, who may seem superhuman or subhuman, depending on your perspective, but is simply inhuman: He cannot imagine being better than he is, and according to his own story has never fallen short of any goals whatsoever.

Christmas is also about human pathos, human failure and human imagination, another attribute Trump entirely lacks. Most of us have come to terms with the fact that Santa Claus doesn’t exist, and most of us (churched or otherwise) likewise perceive the story of Jesus largely in mythical or metaphorical terms. That doesn’t mean that they don’t matter; that doesn’t mean that amid the overamped commercial clutter of the season we can’t sometimes feel the brilliant threads of meaning passed down from our ancestors, the piercing winter light of the year’s shortest day, when our half of our planet begins to turn back out of darkness.

Those moments of aching clarity, of feeling connected to the generations, of longing for better things, of understanding that change is constant — if there’s actually a “Christmas spirit,” that’s where it is. Find those moments when you can, stand with them quietly and watch them go. Donald Trump can never touch them, and will soon fade away.