Too many Democrats! Will the party's overcrowded 2020 field spell disaster?

At least a dozen plausible candidates will seek the 2020 nomination. Could the GOP's 2016 implosion happen again? 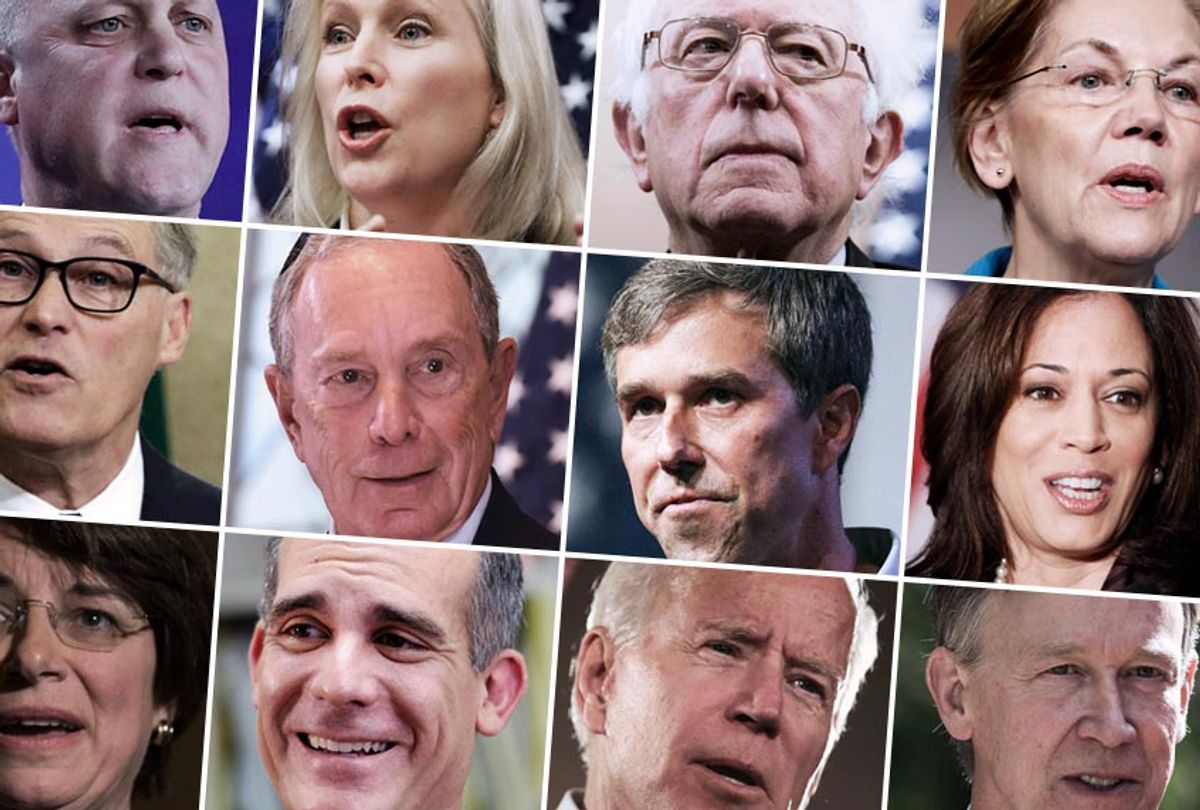 If a CNN poll released earlier this month is any indication, the 2020 presidential election will start off with an immensely crowded Democratic field. That survey included a grand total of 20 plausible candidates — from purported frontrunners like Joe Biden, Bernie Sanders and Beto O'Rourke to a list of female U.S. senators (Kirsten Gillibrand, Kamala Harris, Amy Klobuchar and Elizabeth Warren) more obscure names like Washington Gov. Jay Inslee, Los Angeles Mayor Eric Garcetti and billionaire Tom Steyer. It didn't even mention one of the few officeholders to actually declare his candidacy, West Virginia state Sen. Richard Ojeda.

The fact that there is such a huge potential field can't be dismissed lightly. During the 2016 campaign, the Republican Party fielded more candidates than had ever previously competed in a major party's presidential primaries — there were 17 going into the Iowa caucuses. As we now know, the end result, after many twists and turns, was the nomination and election of Donald Trump, the first U.S. president to lack either military or political experience, and the party's large-scale abandonment of what were previously understood to be its core principles.

No one can pinpoint with certainty whether Trump's nomination was attributable to the number of candidates running. But common sense suggests that was at least a major factor. For one thing, winning an early primary required a relatively small proportion of the vote, giving an edge to those with hardcore fanbases (like Trump) and disadvantaging others whose appeal was based more on strategic pragmatism (like every mainstream Republican running against Trump). What's more, it helped stir up drama that kept the Republican primaries exciting — and made sure they dominated the news cycle.

So what will a large primary field mean for the Democrats in 2020?

As with the 2016 Republican primary, Kyle Kondik, managing editor of Sabato’s Crystal Ball, told Salon by email, "It may be that a large number of entrants actually induces even more candidates to enter the field." In that context, he continued, "The eventual winning percentage in the symbolically important early primaries gets lower because more candidates are hypothetically splitting the vote. A field with a single frontrunner, like Clinton in 2016, may prompt other candidates to take a pass on the race. So it certainly seems like the Democratic field might be unusually large."

Kondik added that he can imagine a scenario in which no candidate wins enough delegates to clinch the nomination. Democratic primaries and caucuses all award delegates proportionally, above a 15 percent threshold. Hence, he said, "One can imagine a handful of contenders trading victories in different states and splitting delegates three or four ways. If that pattern were to continue through Super Tuesday and into March, it might become mathematically hard for one candidate to get a majority of delegates. Usually these things work themselves out and a clear nominee emerges, but that’s not guaranteed. The process could drag on through the primary season or even to the convention, hypothetically."

One possible 2020 candidate can be regarded as the clear frontrunner, if that concept has any meaning at this point. In the aforementioned CNN survey, Joe Biden beat the next three candidates combined, received 30 percent of the vote, compared to 14 percent for Sanders, 9 percent for O'Rourke and 5 percent for Cory Booker. But unlike Hillary Clinton in 2016, Biden doesn't have the entire party establishment behind him (if anything, they may be rallying behind O'Rourke). Perhaps more significantly, there are serious reservations about whether a man of Biden's age (he will turn 78 in 2020) and so strongly identified with the political establishment label (he served 36 years in the Senate before becoming vice president) could actually win the general election.

Most important of all, leading in the polls a full year before the first caucus or primary votes is nearly worthless. "I’m not sure how strong Biden and/or Sanders will be by the time voting starts," Kondik said. "Is their support 'hard?' Or is it just a remnant of name ID that will wither over the next 13-14 months? I genuinely do not know."

This brings us to the outcome that may be most likely in 2020 — a dark horse candidate will emerge, quite likely someone we don't take seriously at the moment.

There is ample historical precedent for that. During both the 1972 and 1976 Democratic presidential primaries, a larger-than-usual field of candidates were considered to be realistic prospects at various points in time, with no clear frontrunner in sight (save for Sen. Edmund Muskie of Maine in 1972, who botched his own chances early on). On both occasions, the result was a previously obscure and somewhat surprising winner, albeit in very different directions. Sen. George McGovern prevailed in the 1972 primaries as an antiwar progressive true believer and practitioner of New Politics, while Jimmy Carter was nominated in 1976 because he was a dogged campaigner who convinced voters that a peanut farmer with a reputation for honesty would be a breath of fresh air in the aftermath of Watergate.

These dark horse candidacies had dramatically different outcomes. McGovern had to fight all the way to the Democratic National Convention to lock down his nomination, gave his acceptance speech long after midnight and chose a running mate with a history of mental health problems who later had to quit the ticket. He was swamped by Richard Nixon in one of the most one-sided national elections in history. By contrast, Carter grew as a politician during the lengthy primary season and narrowly defeated incumbent President Gerald Ford.

My sense is that these are the two possible directions the Democratic Party might head in 2020. If it chooses a latter-day McGovern — someone who appeals to the party faithful and can win the primaries because the bar for what is deemed "victory" has been lowered — they could get wiped out by Donald Trump. But if the size of the field forces the eventual nominee to become a better and tougher candidate, then we'll all look back and say it was a good thing that so many people threw their hats in the ring.