He came out of nowhere once and shook up history. It would be unwise to assume that he can't do so again 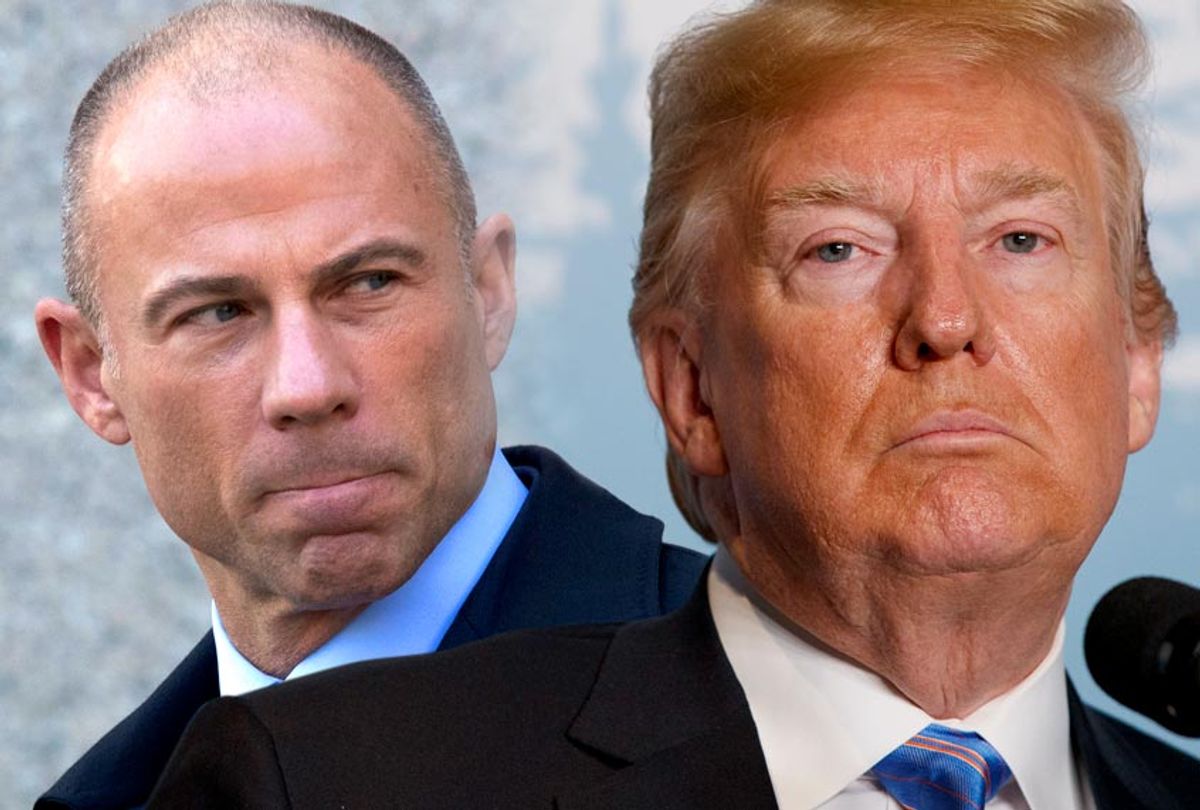 When the history of the Trump era is written, scholars will likely marvel at the meteoric rise of Michael Avenatti.

Before 2018, the prominent lawyer was hardly a household name. Less than twelve months later, Avenatti's determination to draw attention to the claims of adult film actress Stormy Daniels — who says that she had an affair with Donald Trump before he became president and was then paid illegal hush money to stay quiet — has made him one of Trump's loudest detractors. His efforts have also culminated in the criminal conviction of Michael Cohen, Trump's former lawyer and fixer, as well as the looming prospect that Trump's potentially illegal activities in covering up the alleged affairs could contribute to his ultimate downfall.

It has not been all positive for Avenatti, however.

Since October he has been accused of filing a spurious sexual misconduct claim on behalf of a client about future Supreme Court Justice Brett Kavanaugh, arrested on domestic violence charges and faced controversy over his handling of the Stormy Daniels case after Daniels released a statement saying that he had filed a defamation suit against Trump against her wishes and had said things on her behalf without her permission. Between that and a recent decision in the defamation case requiring Daniels to pay nearly $300,000 in legal fees to Trump's attorneys, it is safe to say that Avenatti's future is up in the air at this point.

At the same time, after talking to Avenatti, it is easy to see why his name has been bandied about as a presidential prospect in 2020, even though he recently took himself out of contention (a decision that he partially walked back during this interview). At a time when the Democratic Party seems to be easily cowed by Trump and his fellow Republicans, Avenatti's articulate idealism and undeniable pugnacity makes him an attractive figure.

If he is to succeed in 2020, of course, he'll need to be able to beat back the accusations against him and reestablish himself as a voice for America's most vulnerable – for immigrants, for victims of sexual misconduct, for the poor and for many others he has advocated for in the past. Given that he came out of nowhere once and shook up history, though, it would be unwise to assume that he can't do so again.

This transcript has been lightly edited for clarity and length.

My first question is this, how do you feel about the sentencing of Michael Cohen and how that could reflect on your own role in drawing attention to these alleged hush money payments?

Well, I’m pleased that he was sentenced to a substantial prison term and I don’t think there’s any question that what has resulted thus far is a direct consequence of the actions by my client and the way that we have aggressively litigated this case.

So, you feel that if you and Stormy Daniels had not come forward earlier this year that everything which has happened since may not have occurred?

I want to refer to something you said when you announced that you wouldn’t be running for president in 2020. You mentioned that the Democrats need to nominate a candidate who wouldn’t just be effective as president but would also be able to actually defeat Donald Trump. What kind of candidate do you think the Democrats should nominate in 2020, what quality should they be seeking?

They need to hire someone who is aggressive, charismatic, who has the ability to communicate with people, not only one-on-one, but on television and by way of social media, and they need to nominate someone who is battle-tested and tough.

Are there any candidates you can think of specifically who meet those criteria or who don’t?

Well, certainly. I think the vast majority of the likely candidates do not meet those criteria. I think there’s a select few that perhaps do, but I’m going to decline to name names at this point.

Why don’t you don't want to name names? I’m not asking you to start any feud. It just seems to me that advice is very general and it might be helpful to voters to really get a specific idea of what you think of frontrunners like Joe Biden, Bernie Sanders, Beto O’Rourke, Elizabeth Warren, Kamala Harris?

Well, again, I appreciate the invitation, but I’m going to decline to name names at this point. The nomination is quite a long way away and in an appropriate time, I’m sure that I’ll have some opinions that I would be willing to voice publicly relating to which candidates can actually beat Donald Trump and which candidates can’t. Now, if Donald Trump is not the nominee it’s a completely different analysis, but as a general matter, I think there’s a lot of Democrats, a lot of different people left and center whom are tired of the Democrats constantly being outplayed and taking a very gentle role when it comes to presidential elections and national politics.

Now, I want to segue to your own decision to not run. You said that it was because you spoke to your family. Is there any chance you would change your mind or is that a final decision?

Well, I don’t know that any decision that I’ve ever made is final final, but there was a lot of contemplation that went into making that decision before I announced it. I say never say never, but I’m fairly certain at this point at least in my decision.

Now, if you don’t mind me bringing up something sensitive. I am curious: Was the decision motivated by the dispute between yourself and Stormy Daniels or by the domestic violence accusation or by what Chuck Grassley wrote about you and Julie Swetnick? Did any of those three factors contribute to your choice?

Absolutely not. I expect to be fully exonerated relating to my arrest. The alleged dispute with Stormy Daniels was really no dispute at all. It was completely overblown and the Julie Swetnick situation and Chuck Grassley’s alleged referral for the criminal investigation was a political stunt immediately before the midterm election that’s going absolutely nowhere. The last thing Chuck Grassley and the Republicans want is any investigation into Julie Swetnick’s allegation because if they do such an investigation, which we’ve been begging for for months, they’ll find out she’s 100 percent credible and the allegations are true.

I would like to mention the Stormy Daniels’ dispute. You said that that was overblown. Are you and Ms. Daniels still on good terms?

Yeah, we’re in great terms. We communicate three, four, five times a day. I think she sent out a tweet within a few days of that dust-up stating that there were no issues and are no issues. It’s like any other close relationship almost like a family relationship. People have disagreements from time to time.

My final question is for people who look up to you. There was a story that I read, I forget which publication, but it discussed a woman who made a contribution to one of your causes saying that she really believes in you. I actually know a couple of people who said that they hope that you will have a political future. Do you feel any sense of responsibility when you hear these things and if so could you be specific about what issues you believe are most important in terms of your own future career?

Well, I do feel a responsibility. I’m very flattered with the outpouring of support that I have received over the last 10 months during this journey. Truly, it’s been flattering. It’s always nice to have people say very kind and supportive things about you. On the flip side, there’s been obviously people that have attacked me and I think the reason is because I believe I am effective and I believe that people on the right are not used to having a fighter on the left and it makes them very, very nervous, and it should. But I do feel a sense of responsibility. I don’t know what my future hold at this point. I’m not going to rule out a future in politics. At some point, I’m certainly going to continue to represent people that need good representation and take on the Goliaths of behalf of the Davids, so we’ll have to wait and see what the future holds.

Actually, let me ask one follow-up because this suddenly occurred to me. I actually have asked a couple of these people about the recent controversies in terms of the arrest and in terms of Stormy Daniels’ supposed dispute. For people who may have lost some faith in you as a result of those accusations, for instance, there is a belief that we need to support women who accused men of these kinds of things or people who are concerned about what’s going on with you and Stormy. What would you say to them about each of those two potential controversies?

Well, let me say this. I still believe that women who make accusations should have those accusations fully investigated and vetted. I still believe that. And that goes for the accuser in my case. It goes to Julie Swetnick. It goes to all women. I’m fully supportive of that concept. Nothing has changed in that regard. I do believe that the accusations need to be taken seriously. They need to be fully vetted and investigated, not swept under the rug. But that does not mean that every woman that comes forward with an accusation is necessarily accurate in her accusations. It’s no different than anyone else that makes an accusation, but all accusations by women relating to assault, relating to sexual harassment, inappropriate contact should have their allegations and their claims fully vetted and investigated. There is no excuse for not doing that.