"Destroyer" director Karyn Kusama: "I’m keeping a smile on my face and seething inside"

Salon talks to Kusama about women's rage, the power of noir and working with Nicole Kidman 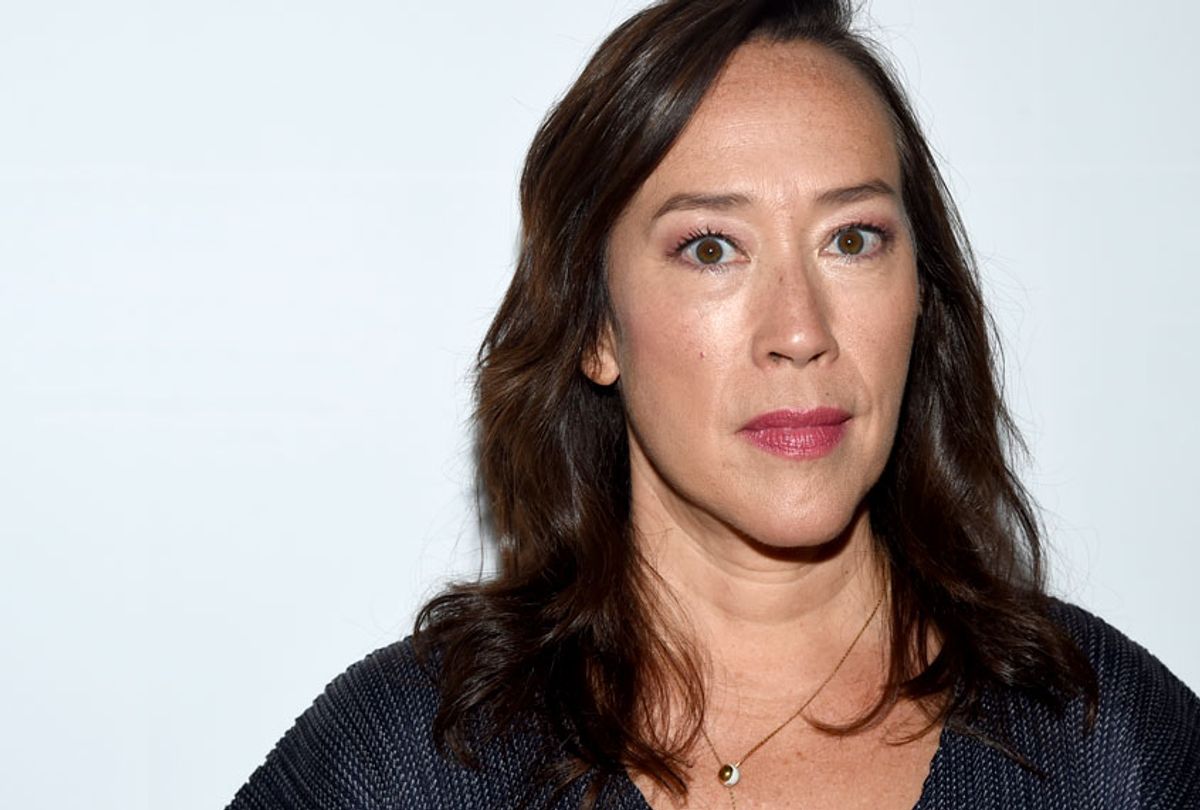 What is distinctive about filmmaker Karyn Kusama’s work is how she approaches her stories visually and her heroines viscerally. Watching Michelle Rodriguez in “Girlfight,” Charlize Theron and Frances McDormand in “Aeon Flux,” and even Tammy Blanchard in “The Invitation,” there is a sense of power and control bubbling under the surface. These are women who have to work at keeping their emotions — and their rage — in check.

That same quality is essential to Erin Bell (Nicole Kidman), the protagonist of Kusama’s latest film, the gritty and unflinching crime drama “Destroyer.” As a cop with a drinking problem, Erin is haunted by her past. She pulls a case that pushes her emotional buttons, and often prompts her to fight to maintain her control — literally and figuratively. Viewers will feel every punch Erin throws and every body blow she receives.

Kusama’s artistry is to bathe “Destroyer” in hyper-realism, but she also keeps viewers as unbalanced as Erin as the story toggles back and forth in time. Kusama excels at creating adrenaline-pumping sequences from a Russian Roulette scene to various chase sequences, and even a bank robbery.

The filmmaker spoke with Salon about making “Destroyer,” her penchant for action scenes, and why she depicts strong women.

“Destroyer” is a nifty neo-noir. What appeals to you about this genre?

I have a femme fatale and a grizzled detective. There’s an obsession in noir — young and old versions of the form — with transgression and not just crime as a story element, but crimes of the heart and soul and ethical deterioration. Those kinds of stories are very potent generally, but especially in times of intense political turmoil. I just feel this notion of criminals being criminal in plain sight, in broad daylight, taking on a much more powerful resonance to me. That was the appeal of the story. The baldness of his criminal underworld that Erin is hunting and participating in.

Let’s talk about broad daylight. Visually, you capture LA in the glaring sun and oppressive heat…

It allows you to imagine there are times you can smell Erin. She can get ripe!

Yes! But you also use filters — particularly a scene of Erin in a car with a blue cast over her face that slowly dissolves. What can you say about how you approached the film’s look and style?

For the visual approach, my cinematographer, Julie Kirkwood, and I thought of sunshine taking on a brutality and almost revealing too much. That’s what it feels like to be living in LA. So much of the movie takes place in the day that we should use the harshness to our advantage and use it as a storytelling tool. We are very inspired by and engaged with films from another era. We shot quickly and had a gritty aesthetic, so it was important to use lenses with imperfections, which allow for interesting flares and natural in-camera effects to be captured in every frame. Close-ups were important. I wanted to feel the claustrophobia of being Erin Bell; there is a part of her character that is completely cornered all the time. I felt the discomfort of tight close-ups evoked, and that sense of being trapped. I wanted to juxtapose her close-ups with shots of her being small in the frame in these big expanses that would give her sense of her smallness in the world, and not elevate her to a heroic status. That [heroism] wasn’t the story I was telling.

“Destroyer” toggles back and forth in time, telling various interlocking stories. What are the challenges for a director with such a tricky narrative?

Part of what I have to be paying attention to are the transitions between present and past. Oftentimes, it’s simple tricks and elements that bridge that gap and fill in the information. A lot happens with sound, or by putting the first few lines of a past scene over present scene to pull audiences into the story. What faces are we focusing on to understand the portal into the past or back into present? Often Erin, but sometimes other characters. In the Russian roulette scene, it was important to bridge the fact that Toby was a young guy with platinum blonde hair, a semi-punk wannabe, and as an older guy in the present, he was dying of lung cancer. Because he looked so different, I had to concentrate on hearing his name and showing his face.

I think all the women in your films are seething and have to keep their emotions in check. How do you identify with Erin and the other female protagonists in your films?

I think it’s interesting that you use the word “seething,” because I quite literally the other day said that I’m keeping a smile on my face and seething inside. That’s common to a lot of women who are expected to project power and confidence but also expected to keep their emotional life in check. Contrary to our popular notions that women’s emotional lives are accessible and open, we are discouraged to [express ourselves]. Many women, the way they survive is to almost deny the power of their emotional life. We got the cultural awareness of this during Christine Blasey Ford keeping her shit together during the Kavanaugh hearing. She described things to mostly impassive men while Kavanaugh wailed and whined and stomped his foot like a f**cking two-year-old only to then be rewarded. Instead of being punished for the clear boundary-stepping behavior he took as an impartial arbiter of the law, he went into infant male psychological mode and got everyone’s respect.

Seething! If women acted on what they were feeling, a lot of stuff would break, and bodies would be hurt. If I did everything I wanted to do in today’s society, I’d fear for the world. I’m not saying that for an ego boost. My feelings are out of control, and I’m interested in characters who suffer in the same headspace. That’s clear in “Destroyer,” in the rage Erin feels and the lack of resolution for the guilt and shame she feels. I’m not advocating for rage as a response, I’m trying to explore it. Speaking for myself, it’s hard not to struggle with those feelings.

What can you say about being a female filmmaker in today’s Hollywood? You’ve made indie films, studio films, work in TV, helmed genre movies, and now “Destroyer” which is generating Oscar buzz. What observations do you have about the industry and your place in it?

I feel like while this is a difficult business to be in, what I’ve come to understand for myself is that I seem to have the stamina for it and the thick skin to whether the storms as well as the openness and vulnerability to make career shifts mid-stream. Though it took a long time to get opportunities — like my first film. I had difficulty making a second film that was so critically and professionally reviled. Then I broke into TV. Those things made me stronger. I learned so much from it, so I do feel something. I’ve felt a shift in myself, but also in the industry to tell stories. TV is a way you can be an artist. The theatrical business is almost ground down for a certain kind of filmmaker. Every feature I want to make, can’t get made. I have to be strategic about it. But I feel hopeful that there are some opportunities out there that a younger generation of filmmakers will experiment with.

What about being an action director? Inasmuch as your films are character studies, you really do excel at depicting fights, bloodletting, and other kinds of violence. I like that!

I like it, too, that’s why I do it. Watching bodies in motion and violence being depicted in some form are some of the most fundamental aspects of movies, moviemaking, and visual storytelling. As I’ve gotten older, I’ve felt not just a moral imperative, but an interest in exploring the notion of action and violence and a consequence on a story level of that violence. My hope with “Destroyer,” or “The Invitation,” or “Jennifer’s Body,” is that people see that there is a thread that violence has to have meaning.

Do you see “Destroyer” as a redemption tale? It’s a film about characters behaving badly, and the audience is kind of positioned to root for the antiheroes.

She’s not a comfortable person, and her way in the world is often really difficult and problematic. But for myself, as a person who goes to the movies to escape and confront the truth — and I want both from movies — I hope it lives in the latter state of trying to confront the truth. Everyone has someone who pushes every button and makes life harder than it is, and Erin gets in her own way. I sympathize with those people. It’s hard to see how that behavior impacts your life. I’m hoping that even if the audience is wrestling with a character you don’t always love, that there is something true about her and she went through a change that was also true and redemptive.

Kidman gives a ferocious performance in “Destroyer.” Can you discuss working with her?

Nicole was just so open from the minute she read the script. She was open to the emotion of the story, and curious about the character and wanted to get to know her. It’s hard for me not to feel creatively aligned with an actor who is super-curious and adventurous. We never saw it as punishing, so much as that this character makes so much of her own trouble. There’s something about that that Nic wanted to play. The film was hard to make. Working with her was a joy.