So long, Republican Congress, and good riddance: It's been even worse than we expected

Two years of Republican government has been an incompetent circus — but, hey, at least they cut rich folks' taxes 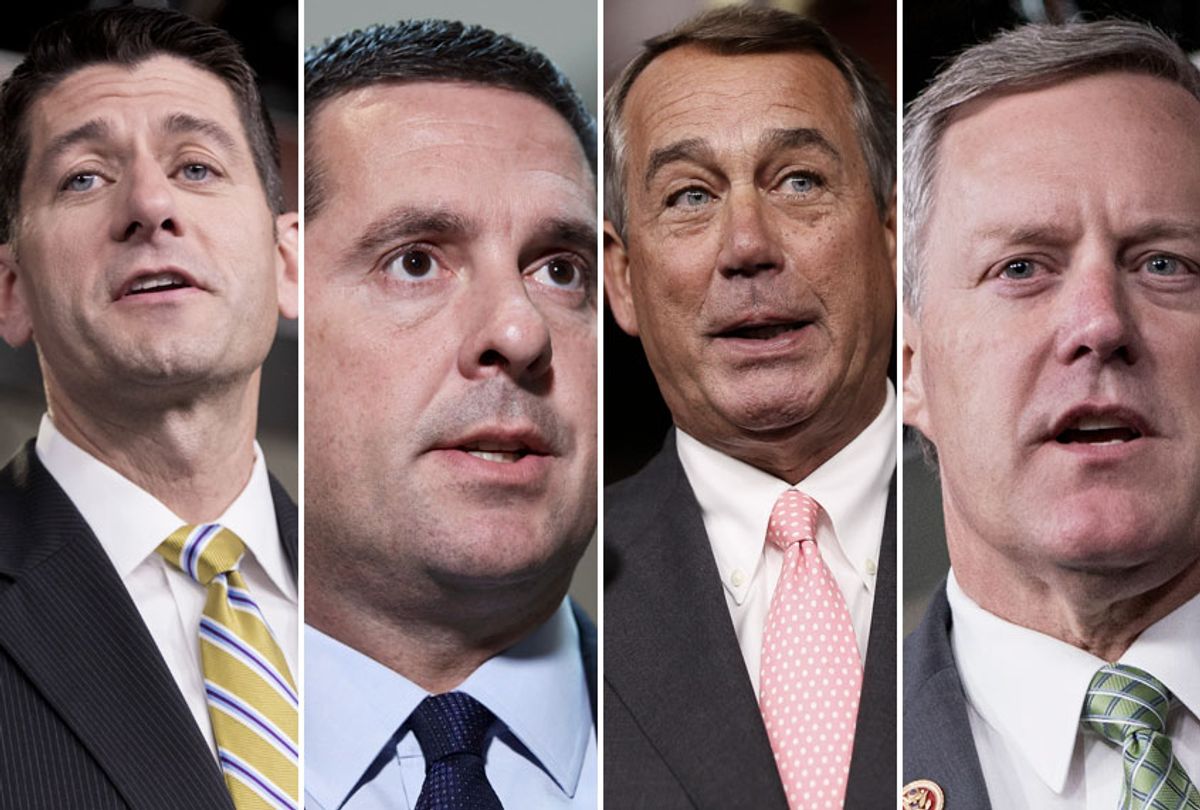 Poor Paul Ryan. The golden boy of the Ayn Rand crowd was once assumed to be a future president, or at least one of the great statesmen of the Republican Party. He was considered a rarity among Republican pols --- a policy wonk with the polish and personality of Ronald Reagan. (I know that sounds crazy, but people really did think that.)

When Barack Obama came into office he saw Ryan as a partner in reducing the federal deficit and the White House went out of its way to feature him prominently in various domestic policy "summits" that were held in the early months of that administration. Obama's opinion changed after he tried to negotiate with Ryan and his cohorts in the House Republican leadership, but it took years for the political media to see Ryan for what he really was: a callow ideologue without much character when the chips were down.

Paul Krugman had his number back in 2010:

Mr. Ryan has become the Republican Party’s poster child for new ideas thanks to his "Roadmap for America’s Future,” a plan for a major overhaul of federal spending and taxes. News media coverage has been overwhelmingly favorable; on Monday, The Washington Post put a glowing profile of Mr. Ryan on its front page, portraying him as the G.O.P.’s fiscal conscience. He’s often described with phrases like “intellectually audacious.”

But it’s the audacity of dopes. Mr. Ryan isn’t offering fresh food for thought; he’s serving up leftovers from the 1990s, drenched in flimflam sauce.

But oh, did they love those blue, blue eyes of his.

Ryan never wanted to be House speaker. He wanted to be president. But when John Boehner was finally forced out by the Freedom Caucus and his heir apparent, Kevin McCarthy, tanked his chances with loose talk about using the Benghazi hearings to hurt Hillary Clinton's presidential campaign, Ryan was the only person  all Republicans could agree on. He reluctantly signed on. And in doing that he ended up signing his political death warrant.

Ryan's performance as speaker showed him to be feckless, hypocritical and weak in just about every way. He couldn't control his crazies on the one hand and couldn't deal effectively with the crazy in the White House on the other. He ended up being a yes-man for an unfit president who didn't even understand how the three branches of government work. Krugman nailed it again this year upon word of Ryan's retirement. Commenting on the media's surprise, even now, that Ryan and his cohorts have blown the deficit up to unprecedented proportions and happily enabled Donald Trump, Krugman wrote:

[T]he principles they claimed to have never had anything to do with their actual goals. In particular, Republicans haven’t abandoned their concerns about budget deficits, because they never cared about deficits; they only faked concern as an excuse to cut social programs.

And if you ask why Ryan never took a stand against Trumpian corruption, why he never showed any concern about Trump’s authoritarian tendencies, what ever made you think he would take such a stand? Again, if you look at Ryan’s actions, not the character he played to gullible audiences, he has never shown himself willing to sacrifice anything he wants — not one dime — on behalf of his professed principles. Why on earth would you expect him to stick his neck out to defend the rule of law?

Surprise. Paul Ryan is just another partisan hack. Still, I don't think even I expected him to be as terrible at the job as he has been. As he takes his farewell tour, which President Trump generously stepped all over with his silly government shutdown, it pays to recall just what a disaster he has been and the rubble he leaves in his wake.

First, let's recall that when Boehner saw the writing on the wall, he at least made a deal to keep the government open and raise the spending limit for two years as a parting gift to the American people. Granted, he wasn't negotiating with an insane president, but he did have the insane Freedom Caucus in the House, allied with the meddling Ted Cruz in the Senate at the time. He spent every last chit trying to calm things down on his way out the door. Ryan's just rolled along with all of Trump's lurching about on the budget and the wall and is leaving in the midst of total chaos.

We have finally reached the end of this two-year period of total Republican control of the government. It's important to look at what they did when they had it. They managed to pack the courts with unfit, inexperienced extremists in the mold of the man who nominated them. No matter how few people agree with their agenda or vote for them in the future, they will have a strong influence through the extremist right-wing judiciary they have installed in lifetime positions. That's one mission they actually accomplished. Of course, that had nothing to do with Paul Ryan.

They managed to get tax cuts for the wealthy and corporations, their Holy Grail, enacted. That was just a generous gift to their big donors, no strings attached and no expectation that it would benefit average Americans. It hasn't.

They just passed a criminal justice reform package that was backed by the Koch brothers and other big-money libertarian types, one suspects just in time to help a spate of rich white guys heading off to jail. (Presidential son-in-law Jared Kushner pushed this through having lived through his father's incarceration for fraud. What a family.)

They couldn't get Obamacare repealed, although Trump's minions have been working overtime to sabotage it from within. They didn't get Trump's wall. The national debt has exploded and the president is on the verge of being impeached. That's quite a record.

But don't worry. This will work out just fine for them. It's just a more extreme version of what they always do. They wreck the economy and destroy all faith in government. Then when the Democrats win as a result of their malfeasance, they stand on the sidelines and wail about fiscal responsibility and demand that Democrats cut services for average people. Like clockwork, rich media celebrities will undoubtedly stroke their chins and sagely advise the people to "grow up" and "take their medicine" by giving up things like health care and retirement security.

Look for Paul Ryan to be batting those baby blues and wringing his hands on TV over debt and deficits any day now. It's a beautiful scam and it's been working for decades. If you didn't know better you'd almost think they planned it this way.