Trump's top Marine admits he has "no idea" about troop withdrawals from Syria, Afghanistan

"That's a really good question. And the honest answer is I have no idea," the commandant told troops in Afghanistan 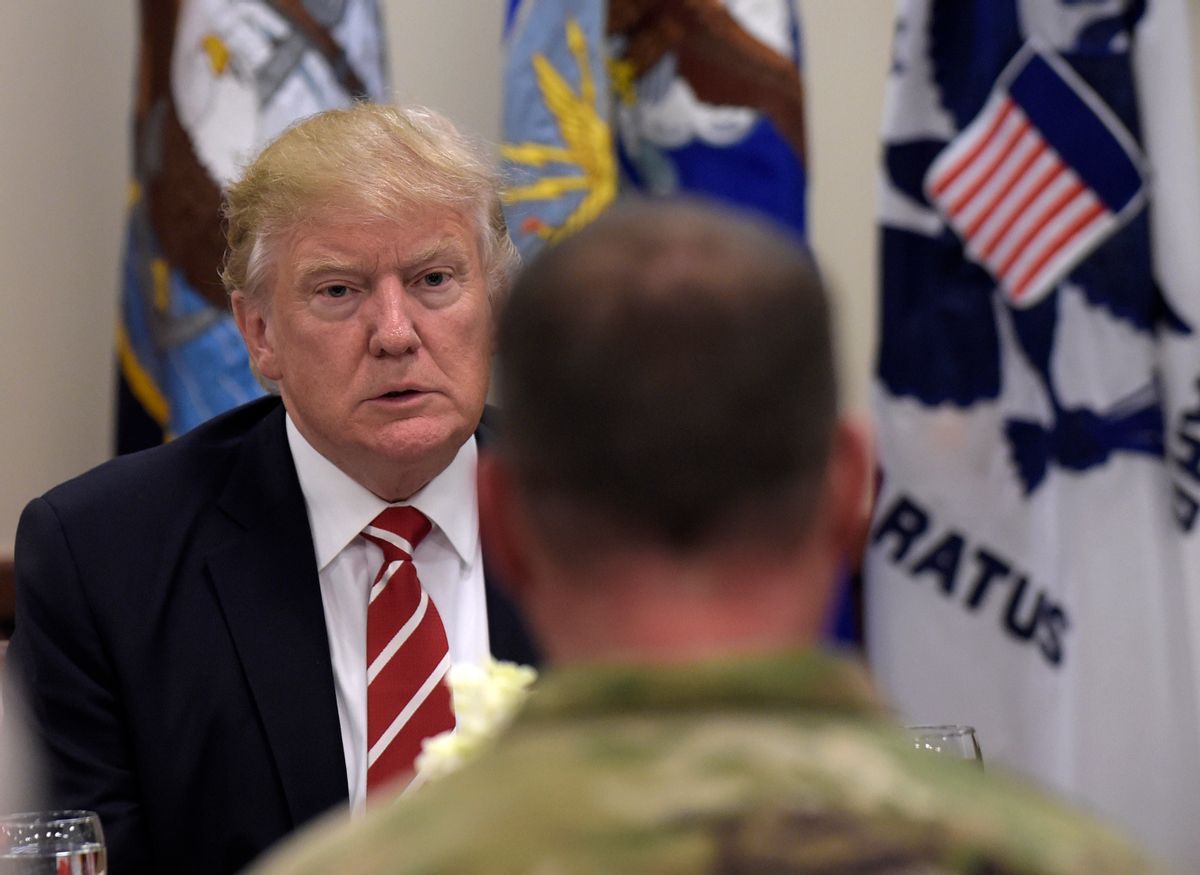 President Donald Trump has lunch with troops while visiting U.S. Central Command and U.S. Special Operations Command at MacDill Air Force Base, Fla., Monday, Feb. 6, 2017. Trump, who spent the weekend at Mar-a-Lago, stopped for a visit to the headquarters before returning to Washington. (AP Photo/Susan Walsh) (AP)
--

Gen. Robert Neller, the Commandant of the Marine Corps, said he has "no idea" on whether or when U.S. troops will be withdrawn from Syria and Afghanistan, and what those orders mean for those on combat deployments, according to The Wall Street Journal.

"That's a really good question," the commandant told his troops in Afghanistan,who are desperate to know how the confusion in Washington affects them. "And the honest answer is I have no idea."

To another gathering of Marines, the general said, "I don't think anybody really knows exactly what's going to happen. I've read the same stuff in the newspaper you did, I have a little more knowledge than that, but not a whole lot more."

Neller was also presented with questions about what the recent drawdown orders and the sudden resignation of Defense Secretary James Mattis indicate for Marines and for America's Middle East strategy, more generally.

The Wall Street Journal reports the Marines "laughed with their leader and his honesty, but it bellied a frustration among officers and personnel about the lack of details from Washington. If Gen. Neller, one of the highest-ranking officers in the American military doesn't know what's happening, who does?"

Navy Secretary Richard Spencer, who joined Neller in Afghanistan for a leg of the holiday visit, told the Journal he hadn't been issued orders from the White House or Pentagon about pulling the troops.

"Nothing formal, just tweets," he said Saturday. Spencer, the Journal reports, added he "might be in the dark because he's been on the road for three days."

Gen. Austin Miller, the head of the U.S. and North Atlantic Treaty Organization (NATO) forces in Afghanistan, also said he did not receive official orders from the White House or the Pentagon on the drawdown.

Trump last week abruptly announced he wants the Pentagon to draw up plans to remove approximately 7,000 U.S. troops for Afghanistan in recent months, as well as all 2,000 U.S. troops from Syria — a move that prompted confusion and widespread criticism in Washington and beyond.

Trump's decision to pull out U.S. troops came under intense scrutiny from fellow Republicans but was praised by Russian President Vladimir Putin. The commander-in-chief ordered the withdrawal of U.S. troops in Syria after he declared the Islamic State, also known as ISIS, in Syria had been defeated there. Just a day before, however, State Department deputy spokesman Robert Palladino said, "We've made significant progress recently in the campaign ... but the job is not yet done." In addition, Defense Secretary James Mattis, who did not agree with Trump's thinking and decision on Syria, announced his resignation.

Trump on Thursday, however, appeared to walk back his claim that ISIS had been totally defeated, and suggested that other countries, including U.S. allies, will have to confront ISIS on their own.

"Does the USA want to be the Policeman of the Middle East, getting NOTHING but spending precious lives and trillions of dollars protecting others who, in almost all cases, do not appreciate what we are doing? Do we want to be there forever? Time for others to finally fight," Trump said.

Amid the outrage over Trump's decision from lawmakers of all political stripes, the abrupt rexit of Mattis and a potential hasty exit from Syria and Afghanistan, U.S. troops abroad remain confused about what the recent orders mean for them and for the broader U.S. military strategy in the Middle East. For his part, Neller has attempted to squash rumors and motivate the troops as he made it clear he hasn't been given specifics by the White House.