Nicole Kidman is gunning for an Oscar in "Destroyer" 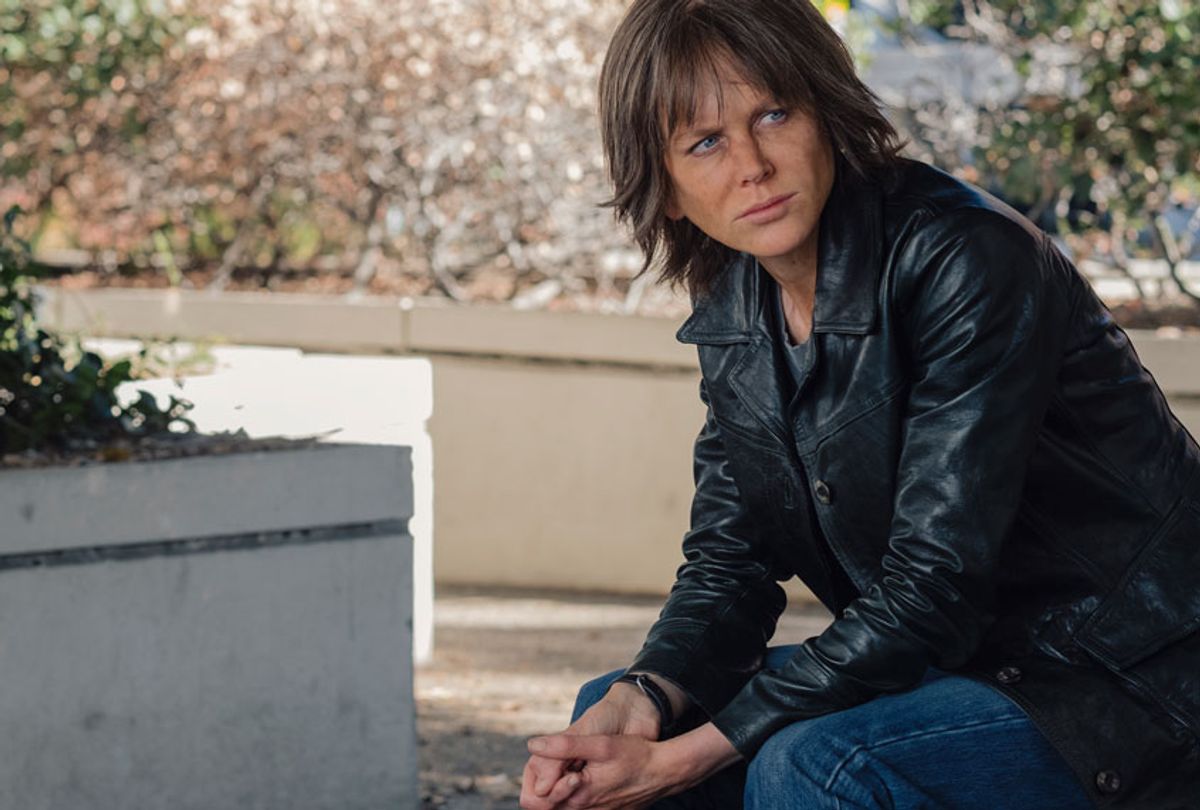 Nicole Kidman is gunning for her second Best Actress Oscar as Erin Bell in Karyn Kusama’s “Destroyer.” The actress is completely deglamorized as a cop who sleeps in her car, never takes off her leather jacket (in the LA heat no less) and talks in a faint but husky whisper, as if any words she says may be her last. She sports no makeup. The only color in her face may be her dead blue eyes that have seen bad things. Erin Bell is haunted, and when her past sneaks back up on her in the form of a dead body — a John Doe and a gun with no prints at a crime scene at which she turns up — this cop has to confront her dark history.

That past, the film’s flashbacks reveal, involves a criminal named Silas (Toby Kebbell) who was under surveillance by Erin and her partner Chris (Sebastian Stan), undercover cops looking to bust him. The John Doe is a “message” for Erin that Silas is back, and she now takes it upon herself to track him down and mete out justice that has eluded her for 17 long, hard years. Kusama toggles back and forth over the course of the film to explain what prompted Erin’s current despair, and why she wants revenge.

“Destroyer” is, for all intents and purposes, a neo-noir, with Erin as its antihero trapped in a story of fatalism and nihilism. There is a femme fatale, and some hard-boiled dialogue, but the film doesn’t traffic too much in noir tropes. Instead of unfolding at night, much of the action takes place in the too-bright daytime; the sun here actually hurts. Occasionally, Kusama will use a filter to give her images some shading. A blue screen over Kidman’s face at one point in the film is both beautiful and unsettling. The lensing by Julie Kirkwood captures the seedy atmosphere of the city well. Kusama also films much of the action in tight shots that give an almost claustrophobic sense of Erin’s life working this case. A scene of her having a meltdown after something goes sideways is especially intense.

To find Silas, Erin tracks down several of his past associates. Toby (Gil Lawson) is bedridden (for reasons that later become clear) and he exacts a rather awkward price for information that will help Erin on her quest. She finds and chases another character, which leads her to DiFranco (Bradley Whitford in a scene-stealing performance). The exchange between Erin and DiFranco is easily the best in the film, particularly when he challenges her, “You roll up with a badge, ask a few questions, and I confess? Has that ever happened?” Alas, Phil Hay and Matt Manfredi’s screenplay sours this encounter as Erin gets out of a tricky situation in a way that may strain credibility.

While absorbing, "Destroyer" is also flawed in ways that threaten to undo the positive elements of the film. There is an almost unnecessary subplot involving Erin’s baby-faced rebellious teenage daughter, Shelby (Jade Pettyjohn), and her poor life choices. Erin hopes to save Shelby, but she can barely take care of herself. Moreover, the film’s emphasis on characters “finding something good” in themselves is clunky. Erin and Chris, as well as Silas and Shelby, are interesting because they are bad people who make bad decisions. The film needs to leave its morality with its corpses.

When the characters misbehave, “Destroyer” is interesting. A scene in which a character is challenged to play Russian Roulette is full of tension even though the outcome is known. Likewise, the film features several chase sequences and two exciting bank robberies — one even has an extended shootout that leads to a knock-down drag-out fight and a character being thrown into the trunk of a car. The film is terrific when it concentrates on the action.

Alas, sometimes, Kusama lets the narrative slow the film down. The search for Silas gets put on hold as the story focuses on what happened to Erin in the past and how she hopes to insure a better future for her daughter. But there is also an interesting wrinkle that develops as the storylines converge near the finale. That said, the far-too-arty ending is wholly misguided; less would have been so much more.

Despite the film's uneven qualities, “Destroyer” is compelling because of Kidman’s unflinching performance. The actress appears in every scene, and it’s impossible to take one’s eye off her. She exudes a fierce determination that is alluring. Erin is also a bit mad, but that works in her favor, as Kidman is best when Erin is out of control, pummeling anyone who gets in the way of what she wants. Whether her gutsy, perhaps baiting performance will net her a fifth Oscar nomination remains to be seen, but it would not be undeserved.

“Destroyer” may position itself as a kind of redemption tale, but Kusama’s film is decidedly not feel-good. The music by Theodore Shapiro is deliberately set to jangle one’s nerves — it is definitely trying too hard — but like most of the film’s elements, it is just effective enough to create an impression.