The year that wasn't: Ben Carson almost got the Sacha Baron Cohen treatment 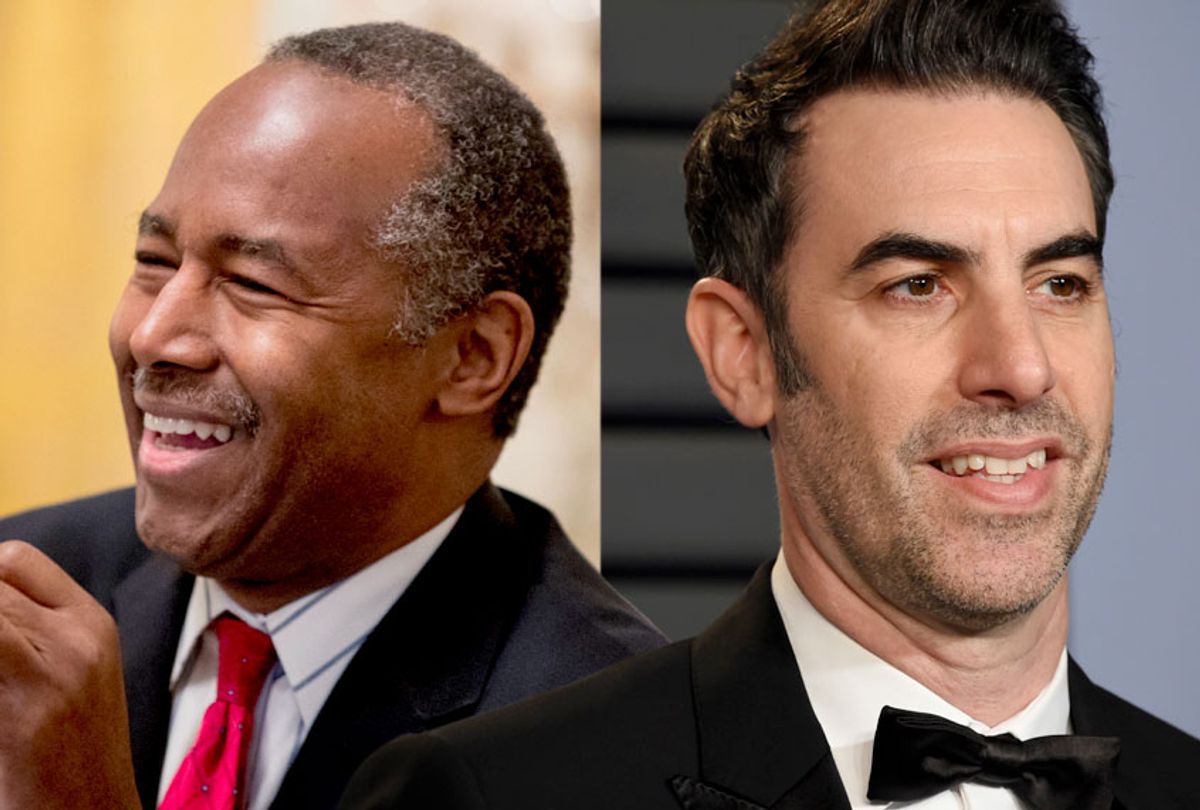 Sacha Baron Cohen's new show Who Is America? was a major hit, one in which the comedian went undercover and interviewed prominent politicians from Sen. Bernie Sanders of Vermont and former Alabama Senate candidate Roy Moore to former Vice President Dick Cheney and former Maricopa County, Arizona sheriff Joe Arpaio. Yet there is at least one politician he was unable to successfully interview, and he happens to be a high-ranking official in President Donald Trump's administration — Secretary of Housing and Urban Development Ben Carson.

In an interview with Deadline, Cohen describes how he came very close to interviewing a member of President Donald Trump's administration.

"We set up an interview with Dr. Ben Carson and we had a hotel room in the Mandarin Oriental in DC," Cohen explained. "I’d been living in DC, undercover, for about three weeks. Bernie Sanders’ people had become suspicious from day one, and so I needed to ensure that nobody knew that I was there. That no one recognized me for three weeks. So I was basically living undercover and in disguise for three weeks. And in the last couple of days, Ben Carson agrees to an interview."

After describing how the hotel was filled with Secret Service agents because of a big international conference occurring that was full of politicians, Cohen described how he attempted to make the Carson interview work anyway.

"We booked two hotel rooms. One hotel room I was going to interview Ben Carson in, and obviously, he had his own Secret Service detail and he was coming with White House press staff," Cohen recalled. "I was in the other room and I got on the phone to my lawyer and said listen, there’s an issue. What happens if a part of his security detail asks for my ID? Because if I give them my real ID we’re done, and so I had a fake ID on me with the name of my character, this Finnish unboxing YouTube star [the character was OMGWhizzBoyOMG], and he said, ‘if you give out a fake ID they’ll arrest you and you’ll probably go to jail.’ So we came up with a solution, which was, if my ID fell on the floor and they picked it up and they made the assumption that this fake ID was real, then I hadn’t actually misled the Secret Service."

He concluded, "So I go into the room, got past the Secret Service, got in front of the camera. This character has a bunch of Shopkins [collectible toy figures], and the White House press representative was there. He says, ‘what are those?’ I say, these are Shopkins. He says, ‘I know what they are, but why are there Shopkins here?’ I go, it’s because that’s what I do, I unbox Shopkins. And I can see Ben Carson is literally walking in front of the camera. He’s just about to enter frame and this guy from the White House had an instinct and he said, ‘Pull him.’ And suddenly the Secret Service pulled him out. So the most I got to see was Ben Carson’s leg."