To "encourage productivity instead of poverty," Ag Secretary Sonny Perdue has just cut food stamps to Trump's base 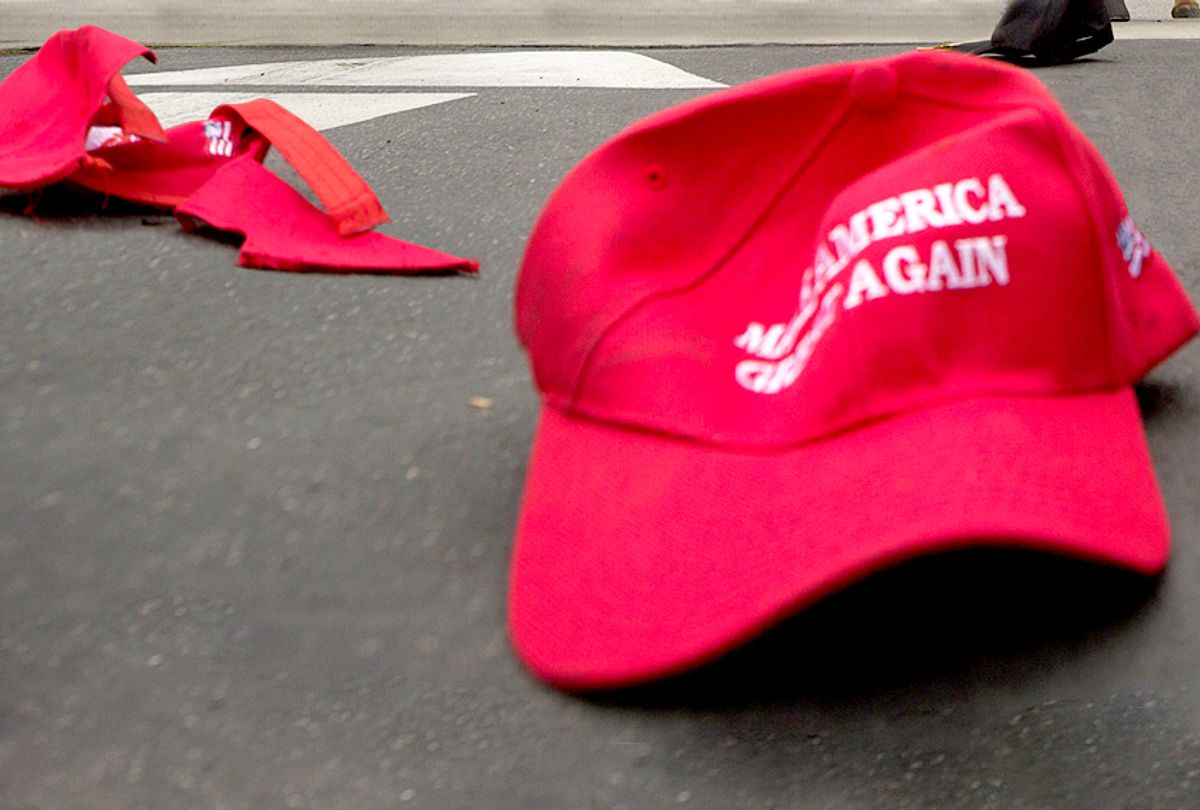 President Trump is planning on cutting The Supplemental Nutrition Assistance Program (SNAP), which will take food out of the mouths of his most loyal supporters — white men.

“At the direction of President Donald J. Trump,” U.S. Department of Agriculture chief, Sonny Perdue, said in a press release issued last Thursday, “we are taking steps to restore integrity to SNAP and move people toward self-sufficiency.”

If you recall, the president received 62 percent of the white male vote back in 2016 — as he paraded around from rally to rally in his floppy red ball cap promising to return the country to them, or, “Make America Great Again.” His followers, mostly white, salivated at their chance to experience social mobility while Trump was in office. Now, many may be taking a huge step backwards: How can you work hard and advance your life on an empty stomach? And who knew white men relied on food stamps more than any other group?

I grew up in a low-income neighborhood in Baltimore — where the population is mostly black — and lived both in and around public housing most of my life, so I’m very familiar with food stamps. I remember when food stamps switched from being bulky white bills to a sleek, modern "Independence Card." I didn’t see a lot of people swiping Visas in my neighborhood; however, the grocery stores stayed crowded on the first of every month, and fridges were full. People on food stamps weren’t making fortunes off the government, or eating like kings and queens — they definitely had to make sure that money lasted for 30 days, which sometimes meant transforming the same batch of spaghetti into three different dishes just to make it through the last week of the month.

That reality left me thinking that welfare, food stamps, or any type of government assistance was a black thing. I didn’t know how white families lived, other than from TV shows like "Mama’s Family" — in which I don’t recall anyone working except Naomi at the market — and the Bundys (on "Married... with Children"), in which Al Bundy lived in a single-family house, owned a car, had a stay-at-home wife and two kids, while working as an uneducated on-commission shoe salesman who rarely sold shoes.

I never even questioned the idea of who was the biggest welfare recipients until I took my first political science class as an undergrad — and heard a frustrated white (racist) student complain about the welfare problem in "his" country.

“My grandparents worked, my parents work,” he said to the mostly white class, “and I work. Black people have it easy — they just sit at home in the lap of luxury and collect checks.”

A few students of color attacked him, challenging all of his points, giving him the ills of being on welfare and telling him to sit his, “dumb ass,” down. I remained quiet, because the last time I argued with a student on the campus basketball court, I ended up slapping him and had to write an apology letter to be readmitted to the gym.

“You are a true child of Reagan,” the professor said to the student, and then again to the class. "Reagan tricked the world into thinking African Americans were more lazy than discriminated-against white people, and brilliantly crafted the narrative of the Welfare Queen.”

“In Chicago, they found a woman who holds the record,” then-presidential candidate and former governor of California Ronald Reagan said at a campaign rally in January 1976. “She used 80 names, 30 addresses, 15 telephone numbers to collect food stamps, Social Security, veterans’ benefits for four nonexistent deceased veteran husbands, as well as welfare. Her tax-free cash income alone has been running $150,000 a year.”

The character Reagan spoke of was found to be fictional years later, according to Opposing Views. MSNBC’s Chris Matthews noted that it was very good propaganda: “It works brilliantly if your target audience is working whites.”

Reagan's language clearly drew racial lines, and strengthened the divide between working-class-welfare-whites and black Americans who faced similar issues. What Reagan and Trump supporters alike don’t understand is that America is not that black — as we make up under 13 percent of the country's 325 million people. Supplemental Nutrition Assistance Program (or SNAP — colloquially known as food stamps), which the president is planning on cutting, serves 39 million Americans who identify as able-bodied adults without dependents (ABAWD). The dirty secret that never makes it into Trump's tremendous campaign speeches is that 55 percent of low-income ABAWDs are male, and 48 percent are white; in other words, he is defeating his own people. Don’t be surprised if you see some of those husky guys at the MAGA hat rallies start to thin out.

“Americans are generous people who believe it is their responsibility to help their fellow citizens when they encounter a difficult stretch,” Trump's Secretary of Agriculture Sonny Perdue said in his statement . “That is the commitment behind SNAP. But like other federal welfare programs, it was never intended to be a way of life.”

I wonder if Trump's constituents — who will likely be most impacted by the cuts — will continue to support him.  Or will they finally wake up?