Happy New Year, kind of: America on a knife edge as 2019 begins

What kind of country are we as the New Year begins? Have we given up on the promises of Jefferson and Lincoln? 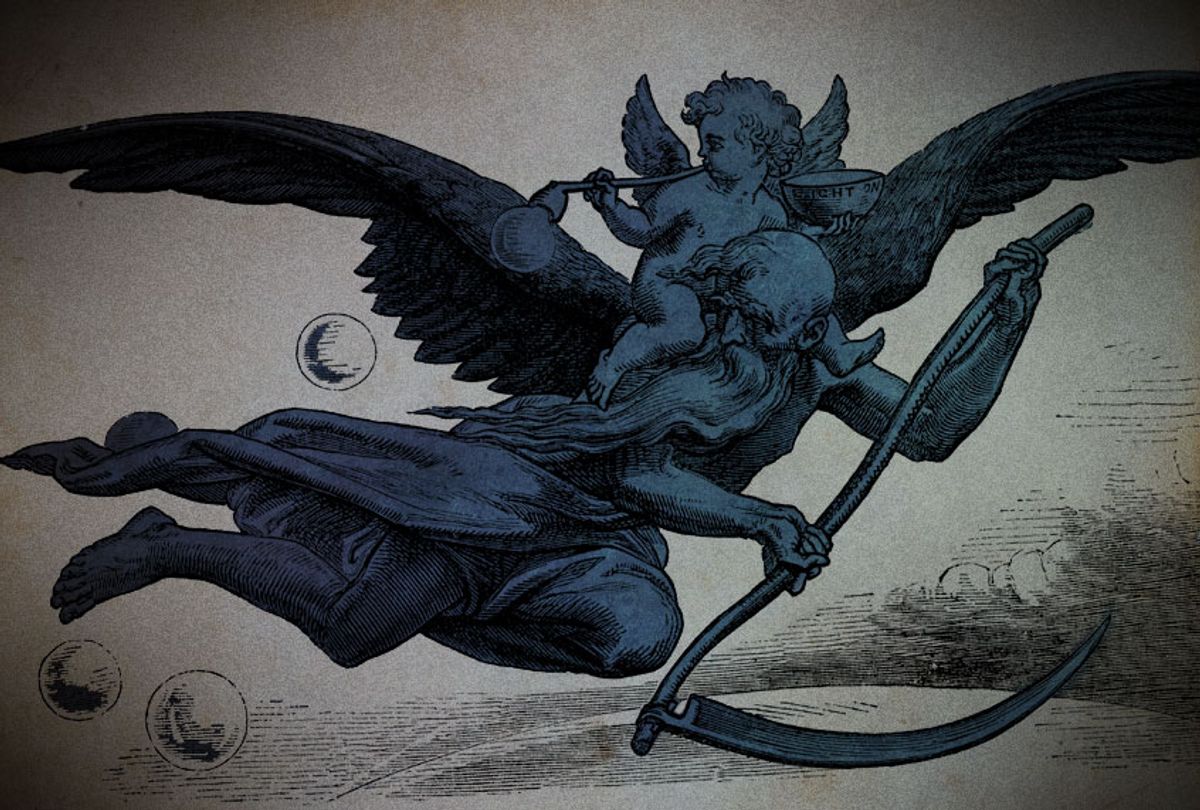 I’ve been traveling over the holidays, along with a few million other people. All the usual stuff is happening: before-Christmas sales, after-Christmas sales, slow security lines at the airport, heavy traffic in the streets. But America seems quiet right now, almost too quiet.

It’s as if we’re all waiting for something — but what? A few answers come to mind, maybe overly obvious ones. A new year is about to start as this one, surely among the most tumultuous in our nation’s history, finally winds down. A new Congress will be sworn in, breaking the Republican hold on power in Washington at the midpoint of Donald Trump’s first term. Eventually, Trump and the next Congress will agree to reopen the government, although it’s hard to imagine the terms of the ceasefire. After a steep December downturn that sent everyone’s retirement accounts into red ink for the year, the financial markets — which play a much bigger role in American life than they really should — will wobble into 2019 like a newborn fawn.

All those things are real enough, but even added together they might not be the central issue. Two days after Christmas, I rode through the streets of an American city in a Super Shuttle van, trying to puzzle this out. Skies were clear and the weather was blissfully mild, as it is across most of the country this holiday season.

I know it’s faulty reasoning to claim a connection between climate change and individual weather events, but in this case it’s irresistible. The current forecast for New York City on New Year’s Day calls for a high around 60 degrees. Just above the level of audibility, the radio was playing randomized hits of the past: Michael Jackson’s “Bad” followed by “Sultans of Swing.” Did I really hear “Sweet Jane” after that? Possibly I imagined that one.

Maybe we’re waiting to find out what kind of country this is, during our balmy midwinter break from the normal concerns of work and school. That seems to hang in the balance right now.

There are two essential responses to the bizarre, evolving phenomenon of Donald Trump’s presidency, at least among people who don’t like him. For a large proportion of Americans, Trump’s authoritarian yearnings, blatant ignorance, apparent criminality and sheer vulgarity represent an assault on democratic norms and traditions, and a betrayal of the national spirit, or at least the better angels of our national nature.

For others, more cynical or more disillusioned, Trump is more like a revelation of something that’s been there all along. Rather than being a historical anomaly, he’s a brutal distillation of the racism, paranoia and hypocrisy that have threaded through American history since the first European colonizers arrived. In this reading, Trump is not entirely a negative phenomenon, or is at least an instructive one: He feels no need to conceal his reactionary agenda, his quasi-fascist lust for power or his overt mistrust of every aspect of what Marxists used to call “bourgeois democracy.”

Trump’s supporters seem to represent a version of that second response, turned inside out. Many may share his baleful view of democratic institutions, or may believe they have become failed, hollowed-out replicas of the real thing. (Not an entirely unreasonable view, in a general sense.) I’ve written about the coincidental overlap between the Trumpian and Marxian views of democracy before, a topic that will certainly generate academic dissertations of the future (assuming there is one). But that doesn’t mean I buy the theory that the far left, whatever its sins may be, is somehow to blame for the current catastrophe.

At any rate, hardcore Trumpers appear to have concluded that America’s essential spirit, or its “greatness,” does not lie in the democratic aspirations of the Declaration of Independence and the Gettysburg Address but somewhere else. Where is that, exactly? It’s too easy to default to ideological buzzwords, but let’s say somewhere in the mystical, anti-historical realms of culture, ethos and (yes) race. It’s not literally true that they voted to hand over the republic to a low-grade wannabe Caesar, with none of the latter’s gifts or accomplishments, but they seem to feel that’s a pretty good idea.

I don’t think these positions are mutually exclusive. Indeed, I believe there's a lot of overlap between them, and that each contains at least some of the truth. Trump is such a polarizing figure, and the media landscape is so bitterly divided, that it’s easy to swallow the widespread notion that we no longer agree about anything and don’t even perceive the same universe of facts. I believe that’s considerably exaggerated in general, and in this case I think most of us agree that the fundamental character of America is being tested and its future seems highly uncertain.

Mainstream liberals rallied around the Democratic Party in impressive numbers in the November midterms. They may well believe that Speaker Nancy Pelosi and Robert Mueller’s impending report and Joe Biden's presidential campaign can bring an end to the Trump regime one way or another and restore some sense of political normalcy. That may be way too optimistic, but at this point they're mostly trying to make lemonade out of lemons, which is largely an admirable course of action. It's unfair to accuse them of “Hamilton electors”-type wishcasting, or of believing that the MAGA-hat insurgency and the profound national crisis it reflects came out of nowhere and will just fade away quietly after the oddly-hued man in the White House is gone.

Progressives or leftists weaned on the Howard Zinn-Noam Chomsky model of American history, on the other hand, may perceive Trump as the culmination of a long process, a resurgence of the racist, xenophobic darkness that lies at the heart of our national story. That doesn’t mean it isn’t shocking to see a buffoonish showman with a dangerously delusional grasp of reality occupy the office once held by Jefferson and Lincoln, FDR and JFK.

Were those guys a bunch of hypocrites, in various ways? Well, yeah: We could make a list. But they all perceived the distance between political reality and our highfalutin national ideals — expressed as the “self-evident” truths of the Declaration, and the government of the people, by the people and for the people imagined on the bloody fields of Gettysburg — and aspired to bring the former a little closer to the latter. You can say that quest was always flawed, always double-edged, perhaps always fundamentally false, and you would have a point. But it changed history; it changed the world. That is our national legacy, and right now we don’t quite know what it means or what to do with it.

Trump may or may not be the worst president in American history; that’s another topic for the time machine. James Buchanan, Lincoln’s disastrous predecessor, surely remains a contender, and for rampant corruption and sheer insignificance Warren G. Harding remains tough to beat. But Trump is certainly the first president in historical memory to depart from the accepted script. He is incapable of high-flown rhetoric about our shared national aspirations toward greater liberty, equality and democracy, and manifestly holds those things in contempt. His refusal even to pretend to care about America’s purported ideals is something quite new, and represents a drastic reboot of the American presidency.

Even Trump’s supporters and enablers are aware of this, to varying degrees. Some of them embrace it, of course, either because they actually want a fascist, exclusionary America (Stephen Miller) or because they understand politics as a theater of cruelty whose only meaningful outcomes are to “own the libs” and inflict pain on adversaries. Others are profoundly uncomfortable with the devil’s bargain they made for tax cuts and right-wing judges, and are having a tough time pretending that this is just politics as usual in a more discordant key. That probably describes most Republican members of the outgoing Congress; Paul Ryan spent the last two years looking like a guy who just learned he has intestinal parasites and can’t find his Lexus in the parking lot.

This was the nature of my Super Shuttle epiphany, assisted by vintage pop music, sluggish traffic and winter sunshine. We are pausing to catch our breath as the old year gives way to the new one, united in doubt and uncertainty. Are we still a functioning democracy, or can we become one again? Or has a deep, ugly truth been revealed and was the whole thing an elaborate scam — a republic of rich white dudes atop a global pyramid scheme? Do Thomas Jefferson’s hypocrisy, greed and racism express the American spirit more than his brilliant synthesis of democratic ideals? Or are those things so intertwined that we can never pull them apart?

We wait to learn the answers, or rather to make the answers. Because that task has fallen to the American people, right here and now. Not to Robert Mueller and Nancy Pelosi, but all of us. If we can forgive each other for not knowing what will happen, for disagreeing about what went wrong, for wanting things that seem ridiculous or impossible — well, that’s not much of a plan, is it? It might be a hope, which is what our stupid, vulnerable species seems to require as a new year begins.