No room at the inn: Hundreds of migrant families released from custody are being dumped in the cold

Trump administration returns to "catch and release" policy, in the most chaotic and destructive manner possible 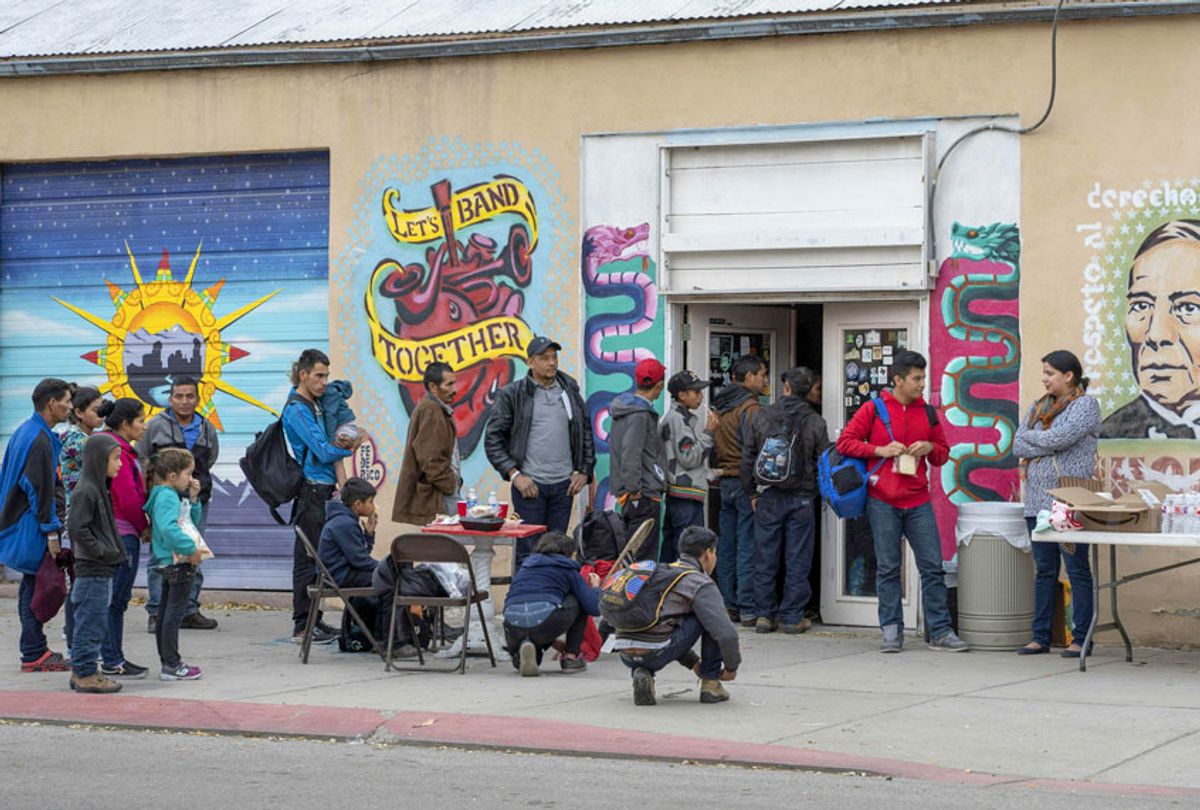 Central American migrants are given food at The Rockhouse Cafe and Gallery after being dropped off in downtown El Paso by Immigration and Customs Enforcement on Christmas day, December 25, 2018. (Getty/Paul Ratje)
--

U.S. Customs and Border Protection is planning to release hundreds, likely thousands, of migrant families from detention this week to make room to take in new families. But the mass releases are stretching resources thin and may leave families out in the cold.

Vox reported that the “wide-scale releases” are expected to last several days as part of a plan to make room available at CBP and ICE facilities. Hundreds of families are set to be released in the Rio Grande Valley and El Paso areas.

The move is essentially a return to the policy that President Trump and his circle have called “catch and release.” The Trump administration has tried to end the policy by enforcing “zero tolerance prosecution,” family separation, and an “asylum ban” that has since been blocked by courts. But concerns over the conditions at Border Patrol detention facilities reached a boiling point after the deaths of two migrant children in government custody.

An eight-year-old Guatemalan boy named Félix Alonzo-Gómez died in Border Patrol custody on Christmas Eve after he was diagnosed with a cold despite a 103°F fever. His death came just two weeks after seven-year-old Jakelin Caal Maquin, who had also traveled from Guatemala, died of severe dehydration in CBP custody.

Under the previous policy, CBP was supposed to transfer immigrants to ICE within 72 hours of detaining them but often held them longer until ICE was able to make room. According to Vox, CBP will now release some families directly. The agency is supposed to contact a local nonprofit to ask if they have capacity to take in new families. “If not, the families would be issued notices to appear in immigration court at a later date, and dropped off at transit centers like Greyhound bus stations,” Vox reported.

The releases have already stretched resources thin in El Paso, where more than 200 families were dropped off “without warning” on Christmas, The Texas Tribune reported. Throughout the week, the total swelled to more than 1,600 families. Local officials have criticized the agencies for not giving them enough time to take in the influx of migrants.

“Wide-scale releases are set to last only a few days, in the hopes that ICE will be able to start taking people in a timely fashion after that,” Vox reported.

While the mass release of families in detention was an outcome many Trump critics had called for, the large number of families have stretched local nonprofits -- which are already overcrowded and don’t have enough resources -- “beyond capacity,” according to Vox.

The end result is that families may be dropped at bus stations in the middle of winter without any directions on what to do.

Ruben Garcia, the head of El Paso’s Annunciation House, a nonprofit that has taken in migrants, told The Texas Tribune that he welcomes the release of families but pleaded for the agencies to stop leaving migrants stranded in the streets.

“[The government] is very much aware that these holding cells are woefully inappropriate. It creates pressure on the part of [Customs and Border Protection], on ICE to try and release these families for whom they have no detention space,” he said. “[But] I am calling upon ICE, I am calling upon CBP to commit to themselves that never again will families be released to the street.”