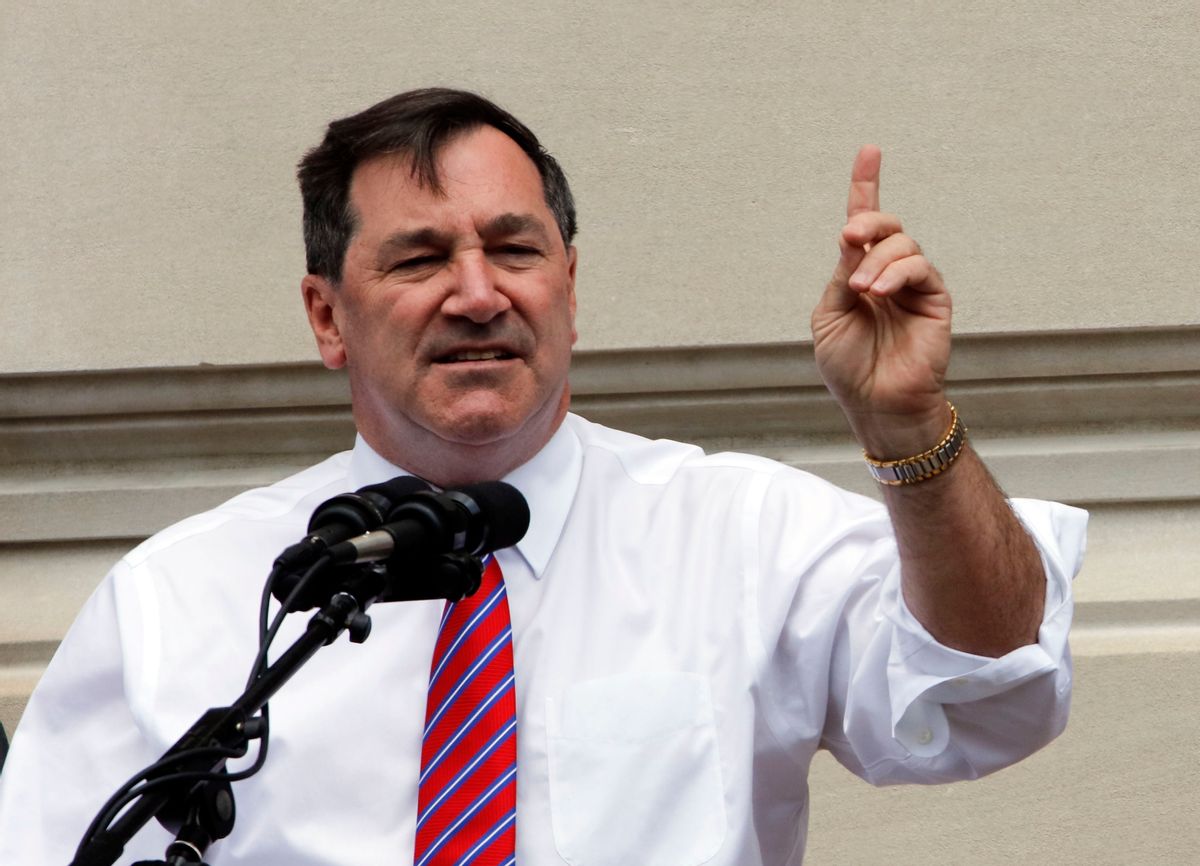 FILE - In this April 29, 2016, file photo, Sen. Joe Donnelly, D-Ind., speaks during a United Steel Workers Local 1999 rally in Indianapolis. It's a rare and momentous decision, one by one, seated at desks centuries old, senators will stand and cast their votes for a Supreme Court nominee. It's a difficult political call in the modern era, especially for the 10 Democrats facing tough re-election next year in states that President Donald Trump won. (AP Photo/AJ Mast, File) (AP)
--

Despite losing re-election in November after running on a fervently anti-Medicare for All platform, outgoing Sen. Joe Donnelly, D-Ind., confidently declared during a CNN interview on Friday that the bold and increasingly popular solution to America's health care crisis does not inspire voters in states like Indiana.

"When you talk 'Medicare for All' ... you start losing the people in my state," Donnelly said. "The talk on the coasts just doesn't get it done in the middle."

The notion that an ambitious left-wing platform only resonates "on the coasts" and is not electorally viable in more conservative states has become a common trope among "moderate" Democrats, but progressives were quick to push back on Donnelly's evidence-free claim, noting that Medicare for All has high levels of support in Indiana and throughout the Midwest.

"Given that Sen. Donnelly lost saying stuff like this, perhaps the lesson is the opposite — Indianans don't want a Democrat who, like Republicans, opposes good policy," argued Ben Spielberg, co-founder of 34justice, in a tweet on Saturday.

According to the progressive policy shop Data for Progress and the Kaiser Family Foundation, Medicare for All polls at 55 percent support in Indiana—and many were quick to point to this data in response to Donnelly's remarks.

As Warren Gunnels, policy director for Sen. Bernie Sanders, I-Vt., pointed out, Donnelly ran a campaign ad attacking Medicare for All and the "radical left" while expressing support for President Donald Trump's proposed border wall — and he lost re-election.

By contrast, Gunnels noted, Sanders campaigned on Medicare for All in Indiana during the 2016 Democratic presidential primary and won, demonstrating that voters in the Midwest are open to single-payer health care and other bold progressive policies.

"Hearing Democrats like Joe Donnelly talk about Medicare for All being 'too extreme' for their constituents have clearly never lived a day in their life wondering if they'll have access to the medical care they need for themselves or their loved ones," wrote Alec Uebersohn, a Ph.D. student at the University of California, Berkeley. "The true radicals are those who think the current status quo, or anything close to it, is acceptable. Or that we should settle for it. Or that change is 'unrealistic.'"

Donnelly's parting advice to Democrats came just days after another lawmaker who lost reelection, Sen. Claire McCaskill, D-Mo., told CNN in an "exit interview" that she is "confused" why bold progressive Rep.-elect Alexandria Ocasio-Cortez, D-N.Y., has sparked such enthusiasm among the Democratic electorate.

"I'm a little confused why she's the thing. But it's a good example of what I'm talking about, a bright shiny new object came out of nowhere and surprised people when she beat a very experienced congressman," McCaskill said. "And so she's now talked about a lot. I'm not sure what she's done yet to generate that kind of enthusiasm, but I wish her well. I hope she hangs the moon."

Critics were quick to characterize Donnelly and McCaskill's remarks as lectures to the growing progressive wing of the party, which is increasingly embracing policies like Medicare for All and a Green New Deal.

In a series of tweets on Saturday, Ocasio-Cortez called McCaskill's remarks "pretty disappointing" and noted that the senator lost re-election after running on a conservative platform.

Donnelly's attack on Medicare for All comes as single-payer proponents are gearing up for a prolonged battle against establishment forces — including many former Obama and Clinton campaign officials — who are committed to upholding America's for-profit health care status quo.

As Common Dreams reported, the Progressive Change Campaign Commitee (PCCC) launched a pressure campaign last week urging the incoming House Democratic majority to push for a vote on Medicare for All legislation as soon as possible to "see who stands with over 70 percent of Americans, and who stands with the lobbyists."

In February, National Nurses United is holding a Medicare for All week of action aimed at building on unprecedented grassroots momentum in support of single-payer health care.