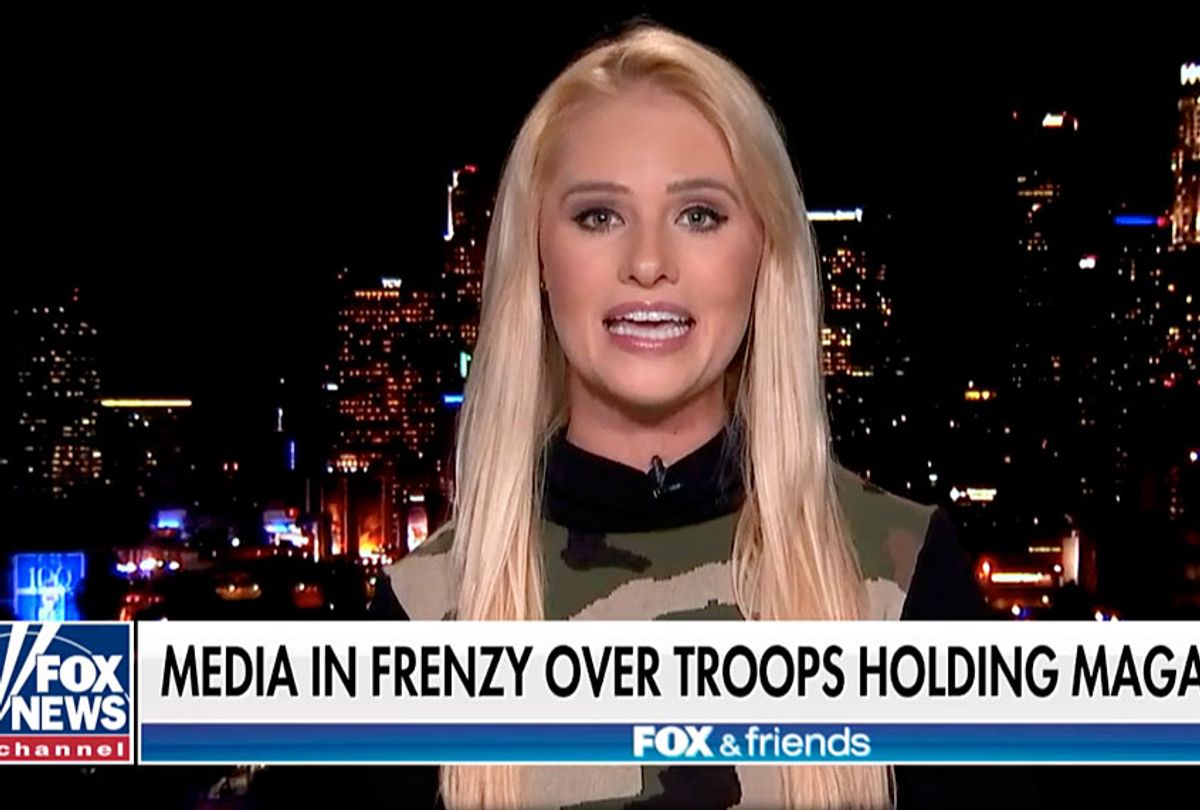 Fox News contributor Tomi Lahren defended President Donald Trump on Friday after the nation's leader faced backlash for "playing politics with the military" overseas during his surprise visit to American troops in Iraq — his first to U.S. soldiers in a combat zone since taking office nearly two years ago.

"The Democrats and those on the left hate the fact that our armed forces loves this president," Lahren claimed on Fox News. "And it's actually interesting that it takes the president traveling to Iraq to visit the troops to get them to care about the troops or talk about the military."

"But, at the end of the day, they can squak all they want to," Lahren continued. "The troops love this president for a reason and he supports them every single day of the year — not just when he goes over for Christmas, unlike the previous president who just used them for a photo-op. So, at the end of the day, they know who has their back — and that's President Donald Trump."

During his surprise visit to American troops in Iraq and Germany earlier this week, the commander in chief pushed his political agenda as he "singled out red 'Make America Great Again' caps in a sea of military fatigues, signed a 'Trump 2020' patch and accused Representative Nancy Pelosi and other leading Democrats of being weak on border security," instead of putting "aside politics to thank a military that represents a broad spectrum of the country," which is a presidential tradition, the New York Times reported.

Trump also complained to the uniformed crowd that the Democrats are refusing to provide him with the funds he claims are needed to fund a border along the U.S.-Mexico border in an attempt to tackle a so-called caravan of migrants traveling from Central America to the United States.The bitter budget standoff over the wall, Trump's signature campaign promise, has resulted in a partial government shutdown that appears to have no end in sight.

Trump also incorrectly told troops in Iraq that he gave them their first pay raise in more than a decade.

The president also defended his abrupt decision to withdraw all 2,000 U.S. troops from Syria, which prompted confusion and alarm in Washington and beyond. Trump claimed U.S. troops can exit Syria because the Islamic State group, also known as ISIS, has been defeated, although State Department deputy spokesman Robert Palladino said, "We've made significant progress recently in the campaign ... but the job is not yet done." In addition, Defense Secretary James Mattis, who did not agree with Trump's thinking and decision on Syria, announced his resignation following the president's announcement to leave Syria.

"We're no longer the suckers, folks," the president told the troops, adding, "Our presence in Syria was not open-ended, and it was never intended to be permanent. Eight years ago, we went there for three months, and we never left."

Despite Lahren's declarations, it wasn't just "the left" who criticized Trump's questionable words of encouragement for the troops. On Fox News, which is notorious for its relentless support of the president, the co-hosts of the network's "Outnumbered" called his visit to the troops an impromptu "campaign rally."

"I would never consider us as a country, as the United States, suckers," co-anchor Julie Banderas said. "We have always led the fight in every single major war. Our military men and women, I believe, deserve way more respect than that."

"What does that say to the families who have lost loved ones in wars prior to right now?" Banderas asked. "'Oh, so my son or daughter was a sucker when they were fighting for our freedom?'"

Lahren, during her Friday appearance on Fox News, also slammed members of the media who appeared surprised to learn that Trump enjoys strong support among members of the military.

"Well, if they paid more attention to the military they would know exactly why the troops love President Trump," she said. "He stands up for them day in and day out. He appreciates them, and, as you said, he respects their mission. He respects what they put their lives on the line to do and he's going to make sure that they're doing it to put America first, to put their families first, your families first, my families first."

"They know that with this president and that's why they love him," Lahren continued. "But the left will never understand that because they can't see through their blinders and they never will."