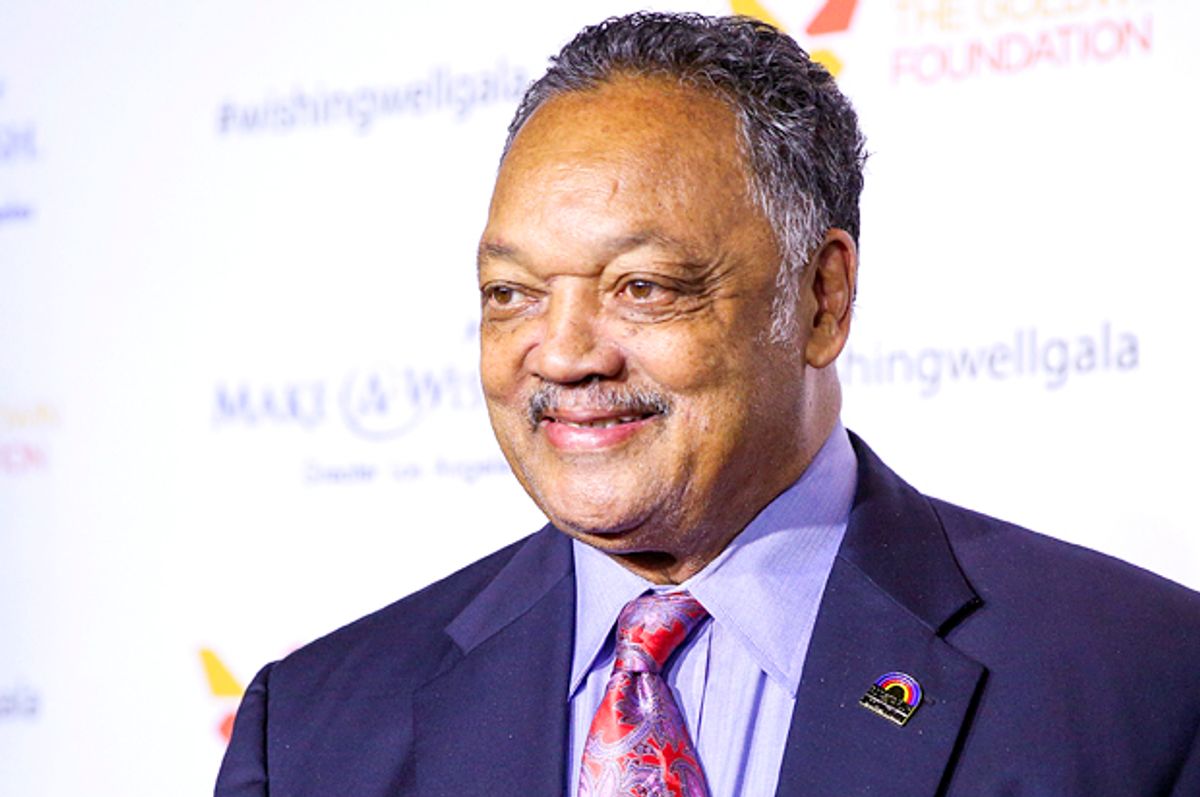 Before Bernie Sanders, there was Jesse Jackson.

Usually, when Jackson is regarded as a trailblazer, it is to Barack Obama — and with good reason. While Jackson wasn't the first African American to seek a major party's presidential nomination, he was the first one to do so in an impactful way, earning 3.3 million votes in 1984 (18.1 percent) and 6.9 million votes in 1988 (29.4 percent). As a result, it is fair to say that without Jackson, there would have been no Obama.

On this new year day, the 156th anniversary of the signing of the Emancipation Proclamation, Jackson reflects on the intersectionally progressive movement his campaigns helped start.

"In some instances stagnated," Jackson mused in a recent interview. "For example, we should be building a railroad over from coast to coast. We should make this deal, these real bullet trains, cost efficient and secure, and put folks back to work, and connect small towns and big towns, rural to urban. We have given up on that one vision of America being connected by rail, which is happening all over Europe, for example."

"Working people and poor people need affordable healthcare, affordable education and a living wage. Everything is around is $15 an hour," Jackson opined.

The divide in the modern Democratic Party, one that seemed to be symbolized by the candidacies of Hillary Clinton and Bernie Sanders in 2016, Jackson argued, is in large part why the progressive movement has not seen more policy victories.

"I supported Hillary and Bernie frankly. In '88 Bernie supported me," Jackson recalled. "Well, I thought that Hillary was likely to win and covered most of our ideas, and the alternative was Trump, so that’s why Hillary."

He added that "because she won by about 3 million votes, the fight, she conceded much too quick. Three million votes and not talking about electoral college. And that needs to be the debated and eliminated."

Jackson noted, however, that the way Sanders managed to bring democratic socialism into the mainstream of America's public debate is the type of leadership needed to propel the Democratic Party in the Trump era.

"My point is that the leaders must mold opinion, not just follow opinion polls, must be transformative," Jackson said.

If you're wondering why I decided to enter the New Year with a Jesse Jackson interview, it is important to realize that the historical figures who helped shape our world aren't going to be around forever. Because our New Year's celebrations are at their core a recognition of the passage of time, the evolution of history, it is instructive to look at the people whose deeds in the past provide us with some sense of what we hope to achieve in the future.

While there are aspects of Jackson's past with which I don't agree (such as his use of an anti-Semitic slur, which as a Jew offends me, or the fact that some of his economic proposals may have been too expensive to be feasible), that doesn't mean I can't admire what he achieved and the values for which he stood. When he ran for president in 1984 and 1988, he did so in a Democratic Party that was shifting rightward in its policies to accommodate the popularity of President Ronald Reagan. There is a profound irony in this: Less than a decade before becoming president, Reagan had been viewed as a right-wing radical. Because he was elected to the presidency, and then re-elected, Reagan managed to move the Republican Party so far to the right that today his views would be considered moderate.

A similar point could be made about Jackson, although the analogy isn't perfect. In 1984 and 1988 he was considered to be a radical leftist. While neither of the Democratic presidents who followed him were equally radical, he planted the seeds of ideological resistance to the Reagan Lite version of the Democratic Party, and in the process made it possible for one of the politicians inspired by his campaign — Mayor Bernie Sanders of Burlington, Vermont — to harvest those ideas as votes nearly three decades later.