Mitt Romney is not going to save us: Time to get over Republican Dad 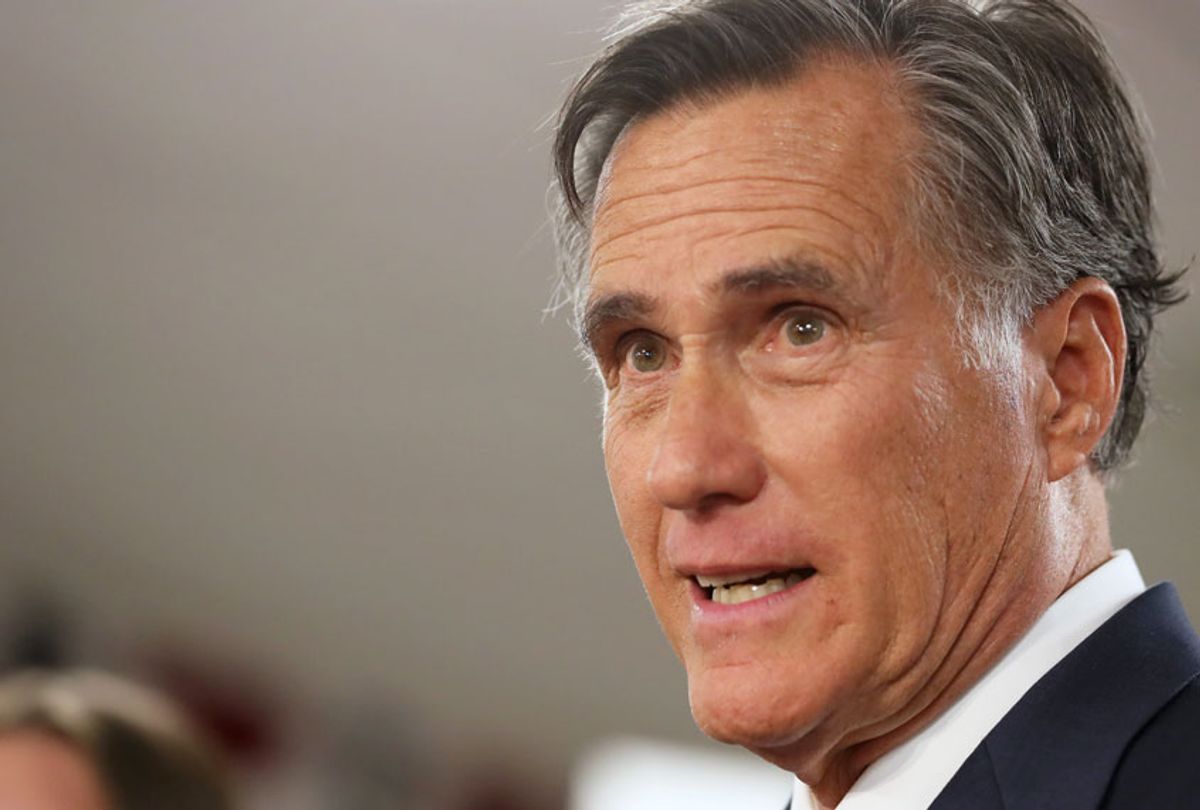 For the past two years, the American public has been subject to a lot of gushing prophecies about a Republican hero who will stand up to Donald Trump, saving the republic from the great orange bully's assault on our democracy. Republican senators such as Jeff Flake, Bob Corker, Ben Sasse and John McCain received endlessly flattering coverage for the words they would utter criticizing Trump even though, with a couple of notable exceptions, these men refused to use their considerable leverage to actually check Trump's power.

Flake, for example, spent the last weeks of his Senate term in 2018 holding up the confirmation of federal judicial nominees, in hopes of protecting special counsel Robert Mueller's investigation. That was laudable enough but had an air of too little, too late, when you consider that Flake had spent the previous two years rubber-stamping other Trump appointees, including two right-wing Supreme Court justices.

Now there's a new figure in D.C. who is ready to suck up a bunch of media praise for his words,  all while doing absolutely nothing meaningful to stand up to Trump: Mitt Romney.

The failed Republican presidential candidate takes office this week as Utah's newly elected senator, replacing the retiring Orrin Hatch. He introduced himself to the nation's capital Tuesday night with an op-ed in the Washington Post in which Romney writes that "the president has not risen to the mantle of the office."

Not exactly a sick burn, though one wouldn't know it from the adulatory response Romney got in some quarters.

"Did Mitt Romney just join the resistance? It sure looks like it," gushed Joel Mathis at The Week, adding, "Any truly effective resistance to Trump's presidency is going to require Republican participation sooner or later."

New York Times columnist Nicholas Kristof tweeted that Romney's op-ed shows "how Republicans could stand up to President Trump instead of enabling lies, corruption and misgovernance."

But if one actually reads Romney's words with any serious attention, it's clear he has no intention whatsoever of offering meaningful resistance to Trump, much less of joining Democratic efforts to hold Trump accountable.

Sure, Romney promises that he "will speak out against" Trump, but makes quite clear that on the action front, he "will support policies that I believe are in the best interest of the country and my state." Which is to say he'll say things to reporters about how disappointed he is in Trump, and then will turn around and back most if not all of Trump's political agenda, just as McCain, Flake, Sasse and Corker did before him.

We've walked this path with Mitt before, in fact. He loved to talk big about Trump during the 2016 campaign, calling him "a phony, a fraud" and declaring that Trump was "playing members of the American public for suckers." But after Trump's flukish election victory, Romney went to a heavily publicized dinner with the president-elect to audition for the job of secretary of state.

A widely shared photo in which a gloating Trump smirked directly at the camera while a chastened Romney smiled glumly over his shoulder, confirmed what many suspected all along: Trump had no intention of giving Romney the job. He just dangled it as bait to get his former critic to humiliate himself by groveling before his new orange master.

Even the timing of this op-ed demonstrates how unserious Romney is when it comes to actually resisting Trump. The newly minted Democratic House majority, which promises to offer meaningful resistance in terms of bills passed and hearings held, will be sworn in this week. Except now, some of the media coverage that could have been devoted to covering substantive Democratic plans to use their new power to hold Trump accountable will be devoted to fawning over yet another Republican man's empty rhetoric.

Whether the timing was intentional or not, this outcome was sadly predictable. There appears to be no end to the hunger in some journalistic corners to believe that strong, loving Republican daddies are coming to protect us from the cruel world. No matter how often the patriarchs of the GOP are exposed as overgrown man-children, motivated by greed and entitlement and unable to muster anything resembling true courage, there remains a widespread faith that we will be graced with a tough, morally resolute Republican hero straight out of a John Wayne movie.

Consider, for instance, how now-former White House chief of staff John Kelly has been treated by the media. Even though there's plenty of evidence that Kelly shared Trump's childishly hysterical racism, many in the media continued to portray Kelly as a sober-minded "adult in the room" who would calmly steer Trump toward more sensible behavior. Since being pushed out of his role, Kelly has been giving self-pitying interviews trying to blame anyone but himself for the horrors that happened on his watch, which only drives home how ridiculous it was to assume that Kelly was a responsible, upright person simply because he has gray hair and had a military career.

This seemingly bottomless faith in a strong-jawed, manly Republican savior among so many in the media is particularly grating when contrasted with how Democratic women are generally treated, which is all too often as a bunch of shrews and harridans.

Sen. Elizabeth Warren, for instance, has been a genuinely strong figure of resistance to Trump. Early in the Trump administration, she was disciplined and silenced by Senate Majority Leader Mitch McConnell because she refused to conceal the racist history of then-Sen. Jeff Sessions when he was nominated to be Trump's attorney general. Warren has spearheaded genuine legislative efforts to curtail corruption in government, and has a long history of being willing to stand up to corporate interests trying to buy the government. Even her video announcing her likely presidential run showed courage, as she called out pundits like Tucker Carlson for racism, despite knowing how Hillary Clinton was hammered in 2016 for using the word "deplorables" to describe such people.

But in a move that was sadly not much of a surprise, Politico published a piece on Monday declaring that Warren could be "written off as too unlikable before her campaign gets off the ground."

This is a woman who literally inspired countless other women to get tattoos celebrating her courage, but nah, she's an intelligent, accomplished female and therefore "unlikable."

Warren is ambitious, of course, but that ambition is tempered by her willingness to take actions, even risky actions, in service of helping others. That's how she created the Consumer Financial Protection Bureau, among other things.

Romney, on the other hand, clearly wrote that op-ed for no other reason than naked ambition. He wants to receive accolades for courage without doing any of the hard work of being brave. Sadly, he will likely get away with it, because so many in the media yearn so much for a Republican daddy that they'll keep projecting that image on one shameless coward after another.