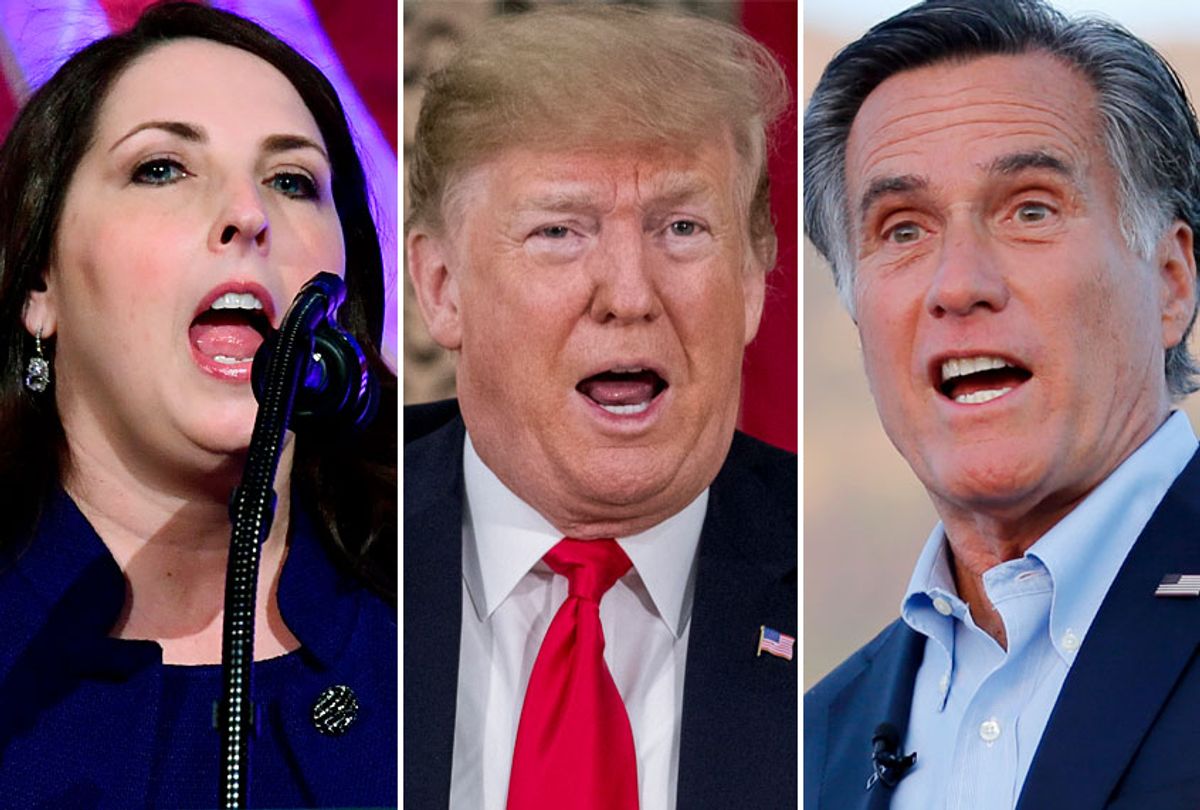 President Donald Trump is leading a pile on against Mitt Romney — the 2012 Republican presidential nominee and incoming freshman senator from Utah — in response to a scathing op-ed criticizing Trump's presidency.

To a great degree, a presidency shapes the public character of the nation. A president should unite us and inspire us to follow “our better angels.” A president should demonstrate the essential qualities of honesty and integrity, and elevate the national discourse with comity and mutual respect. As a nation, we have been blessed with presidents who have called on the greatness of the American spirit. With the nation so divided, resentful and angry, presidential leadership in qualities of character is indispensable. And it is in this province where the incumbent’s shortfall has been most glaring.

Romney also denounced Trump's effect on foreign policy, pointing to a 2016 survey which found that while 84 percent of people in Germany, Britain, France, Canada and Sweden had felt that America "do the right thing in world affairs" — and how, one year later, that number had dropped to 16 percent. The incoming senator described this as symptomatic of Trump's character failures and, by implication, denounced the president's unwillingness to stand up for democratic values abroad.

To reassume our leadership in world politics, we must repair failings in our politics at home. That project begins, of course, with the highest office once again acting to inspire and unite us. It includes political parties promoting policies that strengthen us rather than promote tribalism by exploiting fear and resentment. Our leaders must defend our vital institutions despite their inevitable failings: a free press, the rule of law, strong churches, and responsible corporations and unions.

Romney has attacked Trump's character in the past, most notably during a speech in the 2016 election in which he stated that "dishonesty is Donald Trump’s hallmark." He also pointed out that "now, I’m far from the first to conclude that Donald Trump lacks the temperament to be president. After all, this is an individual who mocked a disabled reporter, who attributed a reporter’s questions to her menstrual cycle, who mocked a brilliant rival who happened to be a woman due to her appearance, who bragged about his marital affairs, and who laces his public speeches with vulgarity."

"Here we go with Mitt Romney, but so fast! Question will be, is he a Flake? I hope not. Would much prefer that Mitt focus on Border Security and so many other things where he can be helpful. I won big, and he didn’t. He should be happy for all Republicans. Be a TEAM player & WIN!" Trump posted on Twitter.

But George Conway, the husband of Trump White House counselor Kellyanne Conway, shot back at Trump's claim that, “I won big and he didn’t,” by noting that Romney actually did better against President Barack Obama in 2012 than Trump did against Hillary Clinton in 2016.

Trump's 2020 campaign manager Brad Parscale responded to Romney with a veiled attack on his Mormonism, tweeting that "the truth is @MittRomney lacked the ability to save this nation. @realDonaldTrump has saved it. Jealously is a drink best served warm and Romney just proved it. So sad, I wish everyone had the courage @realDonaldTrump had." This may have been a reference to Mormon rules on consuming hot drinks.

Even Romney's niece, Ronna Romney McDaniel, defended the president, who infamously asked her to stop publicly using her last name when she became Republican chairwoman in 2017 because of Trump's feud with Romney.