American spirit, as seen on TV via "The Masked Singer" and "The Titan Games"

"The Masked Singer" is a cartoon commentary on fame's influence, but "The Titan Games" could serve another purpose 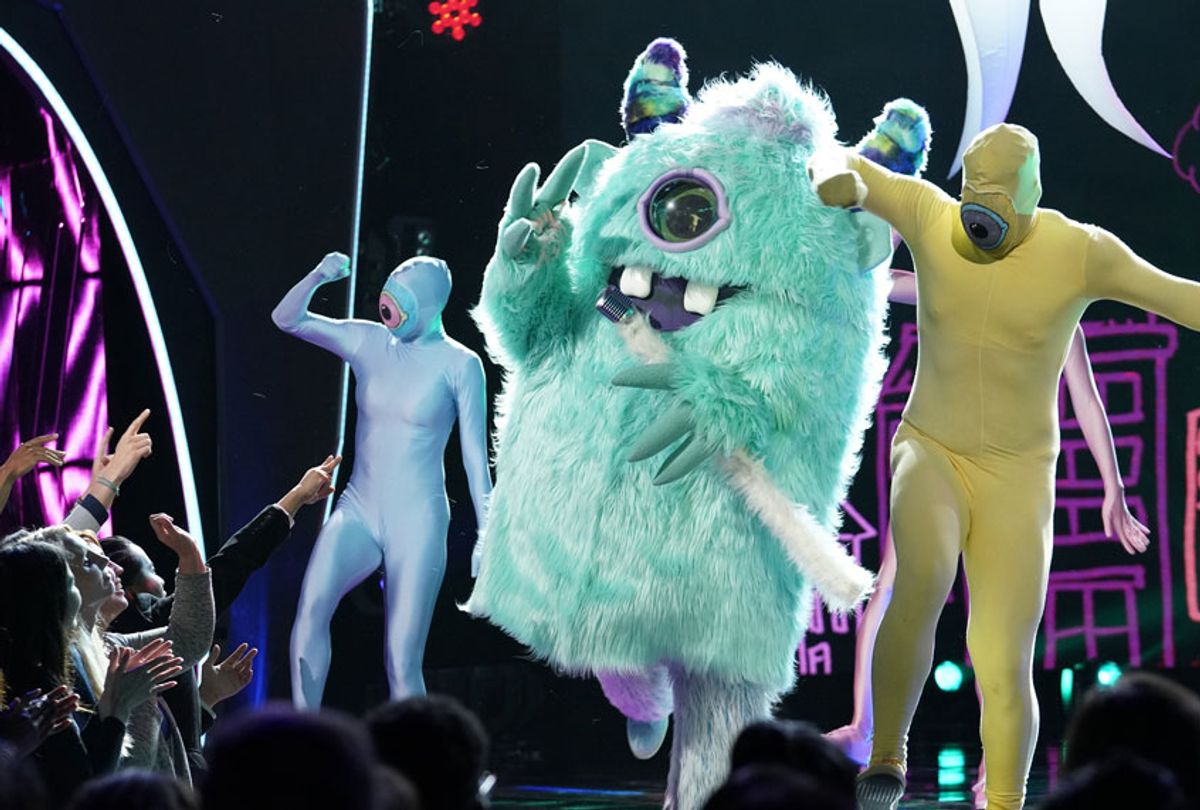 A celebrity is only in the business of being a celebrity for as long as the public is thinking about him, or her. When that business is operating at full capacity, said celebrity becomes a top finisher in a ceaseless popularity contest — royalty on their own Mount Olympus, if you will.

Others hit the reality show circuit. Even that world is split between the caliber of celebrity who runs the show and those who are in the show. It’s the difference between Dwayne Johnson agreeing to anchor “The Titan Games,” celebrating American muscle and, say, a B-lister with a relatively open schedule agreeing to appear on “Dancing with the Stars.”

And somewhere on that spectrum sits Fox’s “The Masked Singer,” a competition that offers nothing in the way of meaningful stakes beyond guessing what kind of famous person would agree to perform a choreographed dance in a creature suit.

Spoiler warning to anyone who hasn’t seen Wednesday night’s debut, which attracted massive attention on Twitter and a respectably-sized audience by early January standards: read on and eventually you will find out.

The answer may not surprise you.

Neither, really, should the success of “The Masked Singer,” an adaptation of proven hit in South Korea. It and the other game shows mentioned here are debuting in that post-holiday sweet spot when scripted series need a break and our minds are still recovering from the holiday movie hangover.

January used to be a fallow period for TV, making it fertile ground for scripted burn-offs and all manner of reality shows, once considered to be disposable entertainment. Until a few of them actually stuck, that is. Fifteen years ago this month “The Apprentice” debuted for the first time on NBC, a piece of trivia so many of us would rather forget but, sadly, cannot.

Some 9.4 million viewers tuned in to puzzle over which famous person would be game or desperate enough to dance around in a gigantic hippo suit on national TV, doing his ablest to distract from his butchery of “My Prerogative.” Of course they did. There might be a future president under there.

Please do not take that seriously, folks.

What you might want to watch, though, is the tune-in for “The Titan Games,” not only as a gauge of the gladiator format appeal but as an indicator of Johnson’s magnetism.   The highest paid actor on Forbes’ Celebrity 100 already rules the action film genre and stars in HBO’s “Ballers,” which means the foundation already has been laid for a future presidential run.

This, you can take seriously. Reporters still ask him if he’s considering it, and he hasn’t ruled it out. The bright spot that Johnson isn’t operating under the delusion that he can, you know, just jump in there and fix the world.

“This is a skill set that requires years and years of experience,” he told Rolling Stone last April. “On a local level, on a state level and then on a national level. I have the utmost respect for our country and that position, and I'm not delusioned in any way to think, 'Oh, absolutely, if Trump can do it, I can do it, and I'll see you in 20-whatever, get ready.' Not at all."

Johnson wears many hats, but in each of his roles he serves, either plainly on in an unspoken fashion as a walking motivational poster.

“The Titan Games,” premiering Thursday at 9 p.m. on NBC,  isn’t very different from “American Ninja Warrior” (another Americanized version of an Asian game show format, this one from Japan) or its predecessor “American Gladiators.” But it’s likely to boost CrossFit studio memberships much in the same way that “The Biggest Loser” inspired couch potatoes to get off their duffs and join a gym.

“Titan” mainly differs from “Loser” and “Ninja Warrior” in that Johnson himself selects the contestants from a deep pool of workout nuts. Muscle is not enough for D.J., as the hosts casually refer to the man formerly known as The Rock. They have to have heart and a story, which makes their struggles through challenges such as “The Herculean Pull” into epic stanzas in a hero’s song.

And it’s a reflection of those closely held American tale in which might, perseverance and sweat are victorious over all, not to mention an extension of a social media brand in which Johnson connects fans to his daily workout routine and other inner musings.

Throwing his weight behind a show that gives workout addicts the opportunity achieve some version of legendary status offers a sell that’s a level beyond what “The Apprentice” ever shilled, blending the personal with business instead of splitting the two. Johnson doesn’t need to be shaped or polished into a mythical version of himself by a producer.

“Every one of these epic and insane challenges these competitors will face is inspired by the workouts that have fueled me, the struggles I’ve experienced and the disciplines I believe in,” Johnson explains.

Indeed. And while watching men and women hammer through concrete and drag boulders in a question to be crowned Titan Champion is entertaining in itself, one also imagines that footage will make for an interesting campaign video someday . . . you know, when D.J. makes his run for city council.

Where “Titan” is a midseason entry in a single star’s strategic plan for longevity, “The Masked Singer” is a midwinter trifle.

Each week on “The Masked Singer,” the mystery stars competing are introduced by host Nick Cannon who, among other things, teased in Wednesday’s premiere that “just like you, I have no idea who any of these singers are. Some of them may be friends. Some of them I may have married!” (Yeah. No. Mariah Carey has better things to do than this show . . . doesn’t she?)

Here’s what we do know: According to Fox, the 12 contestants, 11 of whom remain unidentified, boast a combined 65 Grammy Award nominations, 16 Emmy Award nominations and four Super Bowl titles. Four have stars on the Hollywood Walk of Fame which, as we know all too well, is not exactly an indicator of quality.

Aiding in our guess work are pre-taped profiles containing hints as to who might have agreed to a multi-episode commitment to this thing, each of which is designed to send the audience into a Twitter frenzy before the head-to-head crooning even begins.  The judging panel makes a few really optimistic and deeply unhelpful guesses (will somebody please explain to Nicole Scherzinger that Meghan Markle is now well beyond being willing or able to dress up like a fantasy pony for anyone’s amusement), then the studio audience votes on the winner.

Besides a dancing hippo, Wednesday’s debut treats the audience to choreographed performances by a golden lion — truly the contest’s best costume — a sparkling peacock, a fuzzy monster designed to appeal to Minions fans (and furries, let’s be honest), a lacey unicorn and steampunk deer.

The whole enterprise is pure dumb diversion, to be honest. Viewed from another perspective, however, “The Masked Singer” also is a moving editorial cartoon who commentary indicts human tendency to value poise and appearance, the foundation blocks of fame, over actual talent and true ability.

Mind you, hippo went home this week because the dude really couldn’t dance. But his relative tone deafness is almost beside the point; as “judge” Robin Thicke points out, it was much more impressive that the guy’s legs were so damn agile despite being weighed down by a cumbersome costume head. If he had a lovelier costume, he’d probably still be in the ranks.

Apostrophes around that “judge” designation are intentional, by the way. Thicke, along with fellow table guests Nicole Scherzinger and Jenny McCarthy only add value to the show by way of their clever, jovially clueless observations about the prancing question marks paraded before them. Rounding out the quartet is Ken Jeong, who actually is funny.

But they’re not there to judge anything, any more than the contestants are there to win a recording contract. Instead, “The Masked Singer” is a weird mobile app come to life, in which cuteness wins over all.  Once one factors in the influence of aesthetics — which one must — hippo, who had one of the least appealing of the costumes among the six mystery celebrities who performed this week, was doomed.

At the end of the night, the ousted river horse was revealed to be Pittsburgh Steelers wide receiver Antonio Brown, a guy who is famous to a number of people, but not to me or anyone else who views football Sunday as a terrific time to have the grocery store to myself.

He’s also a former “Dancing with the Stars” contestant; I’ll give you a moment to cue up Sir Elton’s rendition of “Circle of Life.”

Perhaps his participation reveals the caliber of stars burrowed underneath the felt, rhinestones and sequins. Yet to be determined, however, is the resiliency of our initial curiosity. Six new unidentified stars in costume take the stage next week — among them a poodle, a bee, and a guy with a pineapple for  a head. Pineapple man could have silken pipes. If he’s up against the poodle, I’d bet he’s a goner. We are a sucker for prettier things and whatever they may promise.

“Titans,” on the other hand, show what can happen when a person is willing to strain, strive and put in the work. Maybe it won’t pound its way to ratings dominance, but that probably doesn’t matter. The message is in the focus on regular people climbing manufactured mountains, side players in a tale of a celebrated hero who has already won, and may have his sights set on obstacle course with higher stakes.