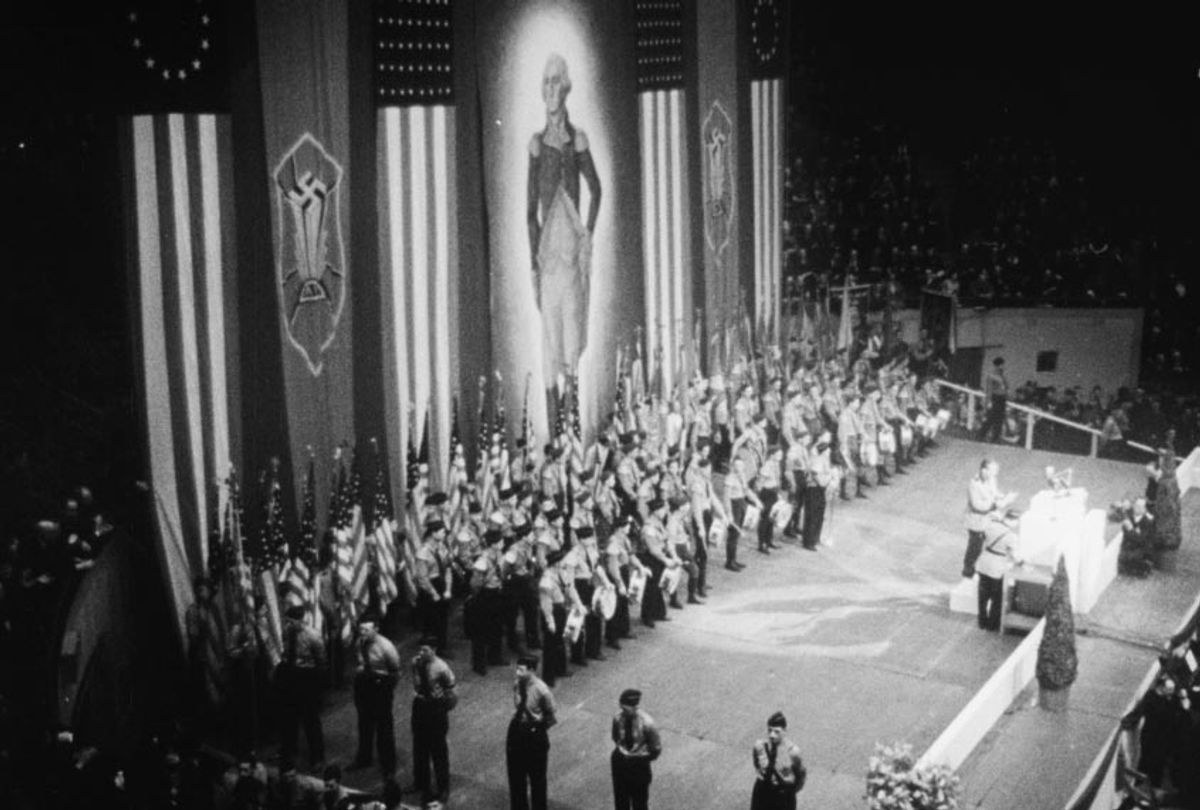 Salon spoke with the filmmakers of these three contenders about their brief yet impactful films.

“A Night at the Garden” by Marshall Curry is a seven-minute short comprised of archival footage of a 1939 Nazi rally at Madison Square Garden. (Watch it here.)

You’ve been to the Oscars twice before with the feature length documentaries, “Street Fight” and “If a Tree Falls.” What observations do you have about the awards, the impact a nomination has, and the process of campaigning?

Curry: I think it helps draw a lot of attention to the project. That’s the main thing that interests me. Going to the Oscars is fun — to dress up and put on a tux — but it attracts attention for your film. I know that there are companies with deep pockets that can spend money on campaigning. I never had a project that fell into that category. I think of campaigning the other way: Use the Academy attention to get more eyeballs on the project rather than spend money to get a few hundred Academy members to pay attention. Too much money is getting spent on campaigning rather than reaching mainstream audience to watch films.

Your film qualified for the Oscar in an unusual way — it received a release on 22 Alamo Drafthouse screens across the country and at the IFC Center in NYC. Why did you choose that process for screening your film?

Curry: Field of Vision, which is Laura Poitras and Charlotte Cook’s company, reached out to Alamo and IFC. We thought the film had extra power when it showed on a large screen. Because it was only seven minutes long, they thought it would work as an old-fashioned newsreel. We put it out after the protests and murder in Charlottesville, so it felt really urgent at that point. A year later, it feels just as urgent. Those theaters shared our feeling that this was a part of history that people need to be reminded of. It was pretty sobering.

Most short documentaries are talking head stories that run 30-40 minutes, but “A Night at the Garden” is short, brisk, and non-narrative. Do you think that works in the film’s favor?

Curry: I don’t have anything against talking head films. When I came across the footage, I considered making more traditional doc, and describing this history, but then I wondered what it would feel like cut together uninterrupted. It had a power — to witness this strange surreal part of America’s strange history. The message comes through and the emotion comes through without anybody explaining it to you. The length felt too short at three minutes and 12 [minutes] was too long, so seven minutes felt like the right arc. There are no interviews or narration, but it does have an arc. You initially see it, and are not sure what it is, and suddenly you see the swastika, and you puzzle it out. I like the way it leaves audiences unsatisfied.

Do you think the provocative title gives your film an edge in that it makes people want to watch it?

Tyrell: I don’t know if that was deliberate, but whenever I referred to the title, which was invented early on, it made people put their guard down. The title is funny, and it allows me to talk about a family member’s death, which has weight.

Your film is about breaking a cycle of abuse. It makes the personal universal. Can you talk about how the film has been cathartic for you and how it may help others?

Tyrell: That was the initial surprise for me with this film. We made it and submitted and got it in Sundance, but we really didn’t think the film would go anywhere. It was a struggle to get financing — it was rejected from a few [funding] places. We didn’t think it would be of interest to people. I made it on pure impulse; I thought talking about my dad and his life would be cathartic for me. We never expected it to be broadly received, but strangers are emailing me about the similarities, so it has gotten some traction and it’s a story that people relate to. They are being discussed now. My grandma came from the generation where you have this abuse/trauma you don’t talk about it. My dad had that as well, but it was at least acknowledged it, and it didn’t continue. I’m of the generation that it is OK to talk about it, so it doesn’t perpetuate.

What can you say about the campaigning for the Oscar and your experiences on the film festival circuit?

Tyrell: First and foremost, awards are nice, and the festivals have been great, but the end of the day, I made this film for myself and my family. I would enjoy it if it hadn’t gone anywhere. It’s been a surprise, and fun, and I’ve been going with it. As a relatively young filmmaker with ambitions beyond short films, you have to self-promote and hustle, and market and meet people at parties. I’m not comfortable doing that, and that’s very weird and uncomfortable for such a personal film. In September, I realized I had to enjoy these festivals. It’s the closest thing I have to sharing with my dad. This Oscar opportunity may never come again. It’s great if it happens, but the award is intimidating!

Joshua Bennett and Juliana Schatz’s documentary short “Los Comandos” chronicles the efforts of an entirely humanitarian and voluntary rescue squad in El Salvador. This urgent film uses interviews with Mimi, a teenage volunteer, as well as observational footage, to show the impact of this organization’s work and how dangerous it is to be young in El Salvador. (Watch it here.)

Why make a documentary short about Los Comandos?

Bennett: The genesis the project is part of a trilogy of films called “Humanity on the Move.” It’s about forced migration of refugees, so it’s capturing people’s journeys, and why people leave their homes. We’re trying to give a context to why people leave — the push factors — and in doing that, they can look at migration with empathy and put themselves in the shoes of people who leave. We hope to shift conversation to policy. We wanted to show why people are leaving to get people to think differently about migration.

Schatz: We started researching ways to tell stories of children — the unaccompanied minors — and flipping the migration narrative on its head: What would it take for a kid to leave it all behind? We stumbled upon the Los Comandos in our research and it was a good starting point because so many kids were coming of age with so much violence — crossing gang boundaries by just going to school. We were able to feature kids who were unsung heroes.

You take a traditional interview/observational documentary approach. Do you think that helps or harms your chance for the Oscar?

Bennett: We were dedicated in telling this story in as an objective way as possible. We’re not presenting an agenda; the audience is led by the story and Mimi’s experience. You have emotions and catharsis and think of the issue from that point of view. You are not told what to think. We wanted to tell a story that was genuine and true and real.

Schatz: I appreciate all styles of documentary, the experimental as well as the traditional, but it’s in the storytelling: Do you come away feeling you understand an issue more than you did before? Did you feel empathy? You can grab that from a number of styles, and the proof is in the storytelling and the characters you meet. There is a conversation in the documentary community about films having a strong journalistic backbone, and if docs can be both. It can be a portrait and an art form, but it is journalistic as well.

Bennett: Show of Force [our production company] has a strong commitment to vérité storytelling and observational documentary. That’s the strongest way of presenting these stories. Long form documentary dives into an issue. There is less room for that in the news, so people look at short documentaries for an immersion into a story that is journalistically sound, well researched, and captures an event as it unfolds.

Schatz: I think people forget how difficult it is to make a vérité film. It is challenging to be there and present at the moment your story is unfolding. We’re not telling you how to understand something; you are a witness to what is happening.

Your film is in Spanish with subtitles. Do you think that affects your chances at winning or being nominated?

Bennett: People are more open to more diverse storytelling. There’s an increased appetite for it. When we were first making the film, talking with broadcasters, subtitling was something that always came up. But even between then (2016) and now, there’s been sort of a shift. I’m a little concerned, but the film pulls you in. We get right into the story, so maybe that would help.

Schatz: It’s not hurting “Roma.” Kudos to Doc World for seeing the value of our story, in spite of subtitling. There’s a tolerance for subtitles. Because there was pushback.

What can you say about competing on the festival circuit, qualifying, and campaigning for the Oscar?

Bennett: It’s a grind. [Laughs.] The process is endlessly fascinating, stressful, inspiring and ultimately rewarding. We saw so many great films this year at fests. It was crazy. People talk about this being the golden era of documentary — it’s been an explosion. When I started in the industry, there were a few places to get your film seen, but now there are more fests and outlets, it can be overwhelming. For all triumphs there are setbacks. We were often told our film, at 28 minutes, was too long.

Do you think the film’s humanitarian issue, the focus on youth and gang violence, as well as the issue of (im)migration make this film appealing to the Academy?

Schatz: I’m not sure. There are a number of films in the running that could make the Academy feel good. The current events, coincidentally, bring this film to the forefront. That’s a strength — I wish it wasn’t, but it’s makes the film as relevant as ever.

Bennett: I wouldn’t feel comfortable commenting on politics of Academy members, but we’re at a time when making films about current events can shift the narrative to think in a more humane way. Films can be powerful, and a testament to contemporary issues. If nominated, more people will see this film, and the issues will be injected to the conversation of shutting down the government to build a wall, or children dying in camps, and it might change the way government responds. We’d be winners however the nominations fall.