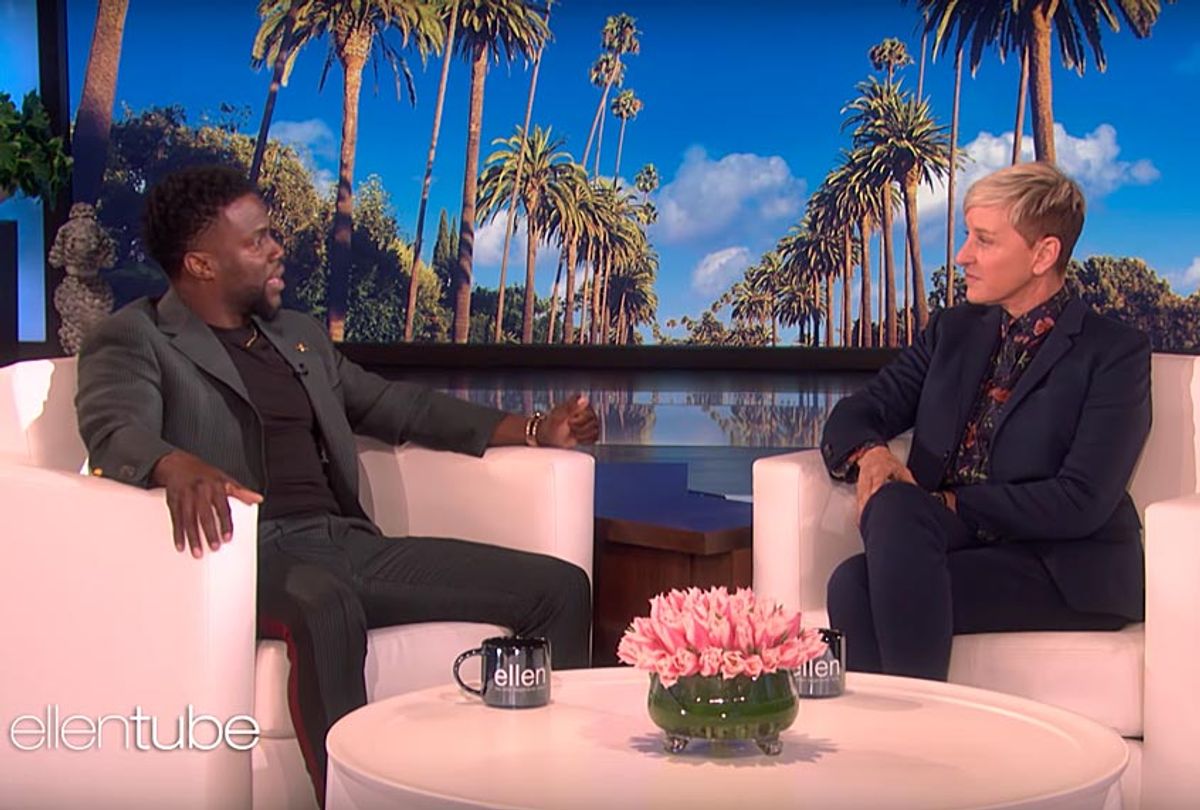 It turns out Kevin Hart may still host the Oscars after all. At least that's what Ellen DeGeneres wants. During an interview with Hart on "The Ellen Show," which aired Friday, DeGeneres revealed that she called the Academy to get him reinstated and pushed him to consider the job again. Hart had stepped down from the hosting job after past homophobic tweets and jokes resurfaced and he refused to apologize, claiming he had done so already.

In the portion of the interview about the Academy Awards controversy — which came off more like a monologue, as Ellen allowed Hart to speak freely in his own self-defense, without any probing or challenge — both comedians framed the entirety of the criticism that Hart received, much of which was valid — as simply the product of "haters" and "trolls." To them, the only victim here was Kevin Hart, and DeGeneres declared on Twitter: "I believe in forgiveness. I believe in second chances. And I believe in @kevinhart4real."

Hart explained that the criticism rolled in the day after it was announced that he would host the Oscars, remarking at how he couldn't even revel in his accomplishment for a full day. "And when it happened, my first thought is I'm going to ignore it," he said. "I'm going to ignore it because it's 10 years old. . .  I've apologized for it. I'm not going to pay it any mind, because when you feed into that stuff, you only add more fuel to the fire."

Hart's retelling of his so-called accountability was both selective and convenient. He posted homophobic tweets as recent as 2011. An "apology" in 2015 came when the reporter asked Hart about one of his notorious homophobic jokes from five years earlier, and he replied: "I wouldn’t tell that joke today, because when I said it, the times weren’t as sensitive as they are now. I think we love to make big deals out of things that aren’t necessarily big deals." And both Hart and DeGeneres' dismissive, narrow view of "that stuff," ignores how much of the criticism came from the black LGBTQ community — most vulnerable to his slurs and to discrimination and violence in real life.

But rationale was no match for Hart's victim complex. He said that the headlines covering his refusal to apologize left off the word "again," emphasizing that he has done so in the past. (Though as I covered extensively here, never in a meaningful way.) "So now, the slander on my name is all homophobia," Hart continued. "Now I'm a little upset. I'm a little upset because I know who I am. I know I don't have a homophobic bone in my body. . . I know that within my apologies, I've taken 10 years to put my apology to work."

At this moment, it seemed like Hart was referring to the ways in which he has worked with or amplified the plight of LGBTQ people, but again he clarifies that he's only talking about himself. "I've yet to go back to that version of the immature comedian that once was. I've moved on," Hart declared. "So now I'm kind of upset, because these 10 years are just being ignored."

Hart centers himself in this narrative, painting his past homophobic jokes and slurs as simply words, not ideas and beliefs that contribute to the shaping of policy and culture, including access to resources and conditions that can create a climate of violence in many forms. If anything, many of the people who critiqued Hart made sure not to ignore the past 10 years during which LGBTQ people, and most especially transgender people of color, have continued to be persecuted and harmed.

Hart said he decided to walk away and ignore the ultimatum from the Academy that demanded he apologize or be replaced, because he didn't want his past to distract from the Oscars night. Interestingly, GLAAD had hoped for the exact opposite.

"We were hoping that this was going to turn into a teachable moment, that Kevin Hart would still be hosting the Oscars and he would be using this moment not only to show his evolution around the LGBTQ community, but also to then use the Oscar stage, one of the biggest stages in the world, to help build unity and awareness around the LGBTQ community and how we are marginalized in this country," GLAAD president and CEO Sarah Kate Ellis told CNN after he stepped down.

Hart went on to tell DeGeneres that he's having trouble moving past the controversy, however, because "it was a malicious attack on my character," he said, "an attack to end me."

It was actually remarkable how little self-awareness and reflection Hart demonstrated. So much of the criticism simply sought a meaningful apology from him, one that went beyond categorizing people as "too sensitive" nowadays. People wanted true accountability, which would center the LGBTQ community over Hart's own comfort and ambitions and show growth through actions more profound than a statement that he's stopped telling homophobic jokes.

But DeGeneres instead explained how she advocated for the Academy to reinstate him as Oscars host. "There are so many haters out there," she added. "Don't pay attention to them. That's a small group of people being very, very loud. We are a huge group of people who love you and want to see you host the Oscars." DeGeneres told Hart that the "trolls" win if he doesn't host. "You can't let them destroy you."

The whole exchange was deeply tragic and did a huge disservice to all except the two powerful celebrities facing each other at that moment. Hart may or may not host the Oscars, but he will continue to believe that he, a wealthy and famous entertainer, is the victim in the Oscars controversy and he'll give himself a pass to ignore important feedback from the LGBTQ community. DeGeneres, also a powerful celebrity, will allow herself to believe she's the one who can speak for a diverse, multi-faceted community, and that she has the power to absolve homophobia, regardless of whether she's impacted by it or not.

It really didn't have to go this way. There could have been ways for Hart to move forward and even still host the Oscars that wouldn't have minimized his past hateful language, but instead offered reflection and honest engagement with the community he harmed. But celebrity arrogance is strong and both ended up instead simply validating the labels they had hoped to dismantle: DeGeneres as "(un)relatable" and Hart as unaccountable.