Long before Rep. Rashida Tlaib's outburst, many on the Democratic left have been pushing hard for impeachment 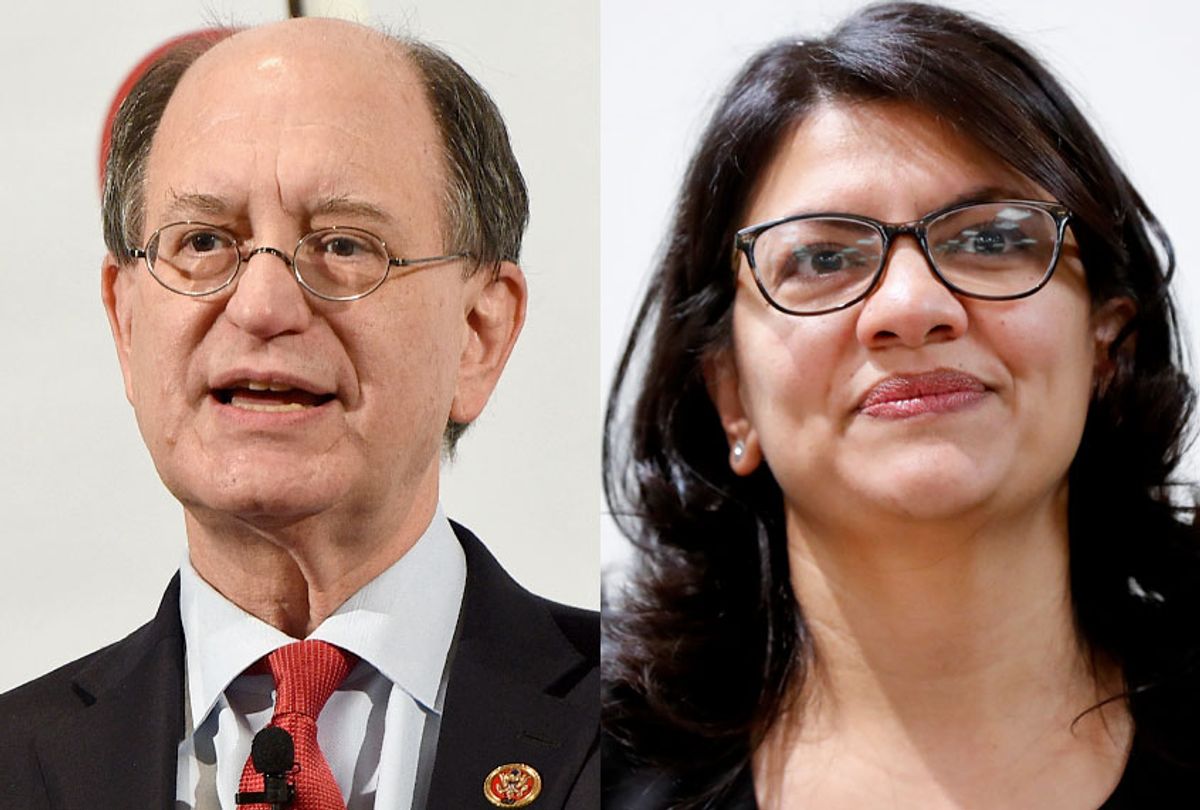 As the Democratic Party took control of the U.S. House on Thursday, the first day of the 116th Congress, along with the lower chamber's leadership shift came a renewed push from some Democrats to impeach President Donald Trump.

Democratic Reps. Brad Sherman (Calif.) and Al Green (Texas) on Thursday reintroduced articles of impeachment against Trump for allegedly obstructing justice by firing former FBI director James Comey, among other actions. Sherman, with Green's support, had previously filed an impeachment resolution in July of 2017, when the House was under Republican control.

Since Republicans refused to hold hearings on that measure, H.Res. 438, and all legislation introduced last session but not enacted into law was terminated on Wednesday, Sherman said in a statement: "Accordingly, it's necessary and appropriate to reintroduce the Articles of Impeachment. I have not changed the text. I continue to believe that obstruction of justice is the clearest, simplest, and most provable high crime and misdemeanor committed by Donald J. Trump."

"Every day, Donald Trump shows that leaving the White House would be good for our country," the 12-term congressman told the Los Angeles Times early Thursday, before the congressional session convened. In terms of his impeachment resolution, Sherman said, "There is no reason it shouldn't be before the Congress."

Responding to criticism from Rep. Jim Jordan, R-Ohio, for his decision to continue the impeachment effort, Sherman tweeted out his column published by HuffPost in October of 2017, when he wrote: "We have clear and convincing evidence that President Trump is guilty of obstruction of justice. It is time now for the House Judiciary Committee to begin hearings on impeachment."

Now, however, Sherman and newly elected House Speaker Nancy Pelosi seem inclined to wait until they know more about the ongoing probe into alleged Russian interference in the 2016 presidential election and the possibility of collusion with the Trump campaign. As Sherman put it, "I understand that a majority of our Democratic Caucus will want to wait until Special Counsel Robert Mueller completes his report, which I would hope will be issued in the next two to three months."

Pelosi, in an interview published Thursday morning, told "Today's" Savannah Guthrie that she wasn't ruling out Trump being indicted or impeached, calling it "an open discussion." But, she added: "We have to wait and see what happens with the Mueller report. We shouldn't be impeaching for a political reason, and we shouldn't avoid impeachment for a political reason. So we'll just have to see how it comes."

Others are less inclined to take the slow road and wait for Mueller's findings. Ahead of taking her first oath as a member of Congress on Thursday, Rep. Rashida Tlaib, D-Mich. — joined by John Bonifaz, co-founder and president of Free Speech For People (FSFP) — argued in theDetroit Free Press:

[We] do not need to wait on the outcome of that criminal investigation before moving forward now with an inquiry in the U.S. House of Representatives on whether the president has committed impeachable "high crimes and misdemeanors" against the state: abuse of power and abuse of the public trust. Each passing day brings more pain for the people most directly hurt by this president, and these are days we simply cannot get back. The time for impeachment proceedings is now.

As The Nation's John Nichols concluded about their "carefully considered" op-ed, "This sense of urgency, rooted in her own history as a lawyer and activist, will inform Tlaib's service, as she makes clear in her rejection of petty political calculations regarding impeachment." (Tlaib's article was published before she made national headlines in a viral video by promising to "impeach the motherf**ker.")

Nichols himself also has made the case for impeaching Trump, writing in his column for The Capital Times earlier this week that "if Americans take seriously the impeachment process that led to the end of Richard Nixon's presidency in 1974, then we can no longer neglect the arguments for Trump's impeachment."

However, while efforts to impeach Trump have drawn comparisons to Nixon, there may be some differences in how it all shakes out. As Bill Blum posited for Truthdigon Wednesday, "unlike Nixon, Trump will not resign. Some of his children and his son-in-law may be indicted, the stock market may continue its tumble, the country may slide into a recession, and the Republican establishment may desert him, but he won't follow Nixon's lead and quit."

"Trump will remain until the bitter end and seek reelection," Blum concludes, "not because he is a man of courage and principle, but because he has no other safe personal option. ... Trump has little to gain by departing the Oval Office early and much to lose if he does. Guided by narcissism and self-interest, and backed by his dogged white nationalist base, he'll stay put until he is either removed or defeated at the polls."