Author Sohaila Abdulali: "It's not a survivor's duty to cure rape" 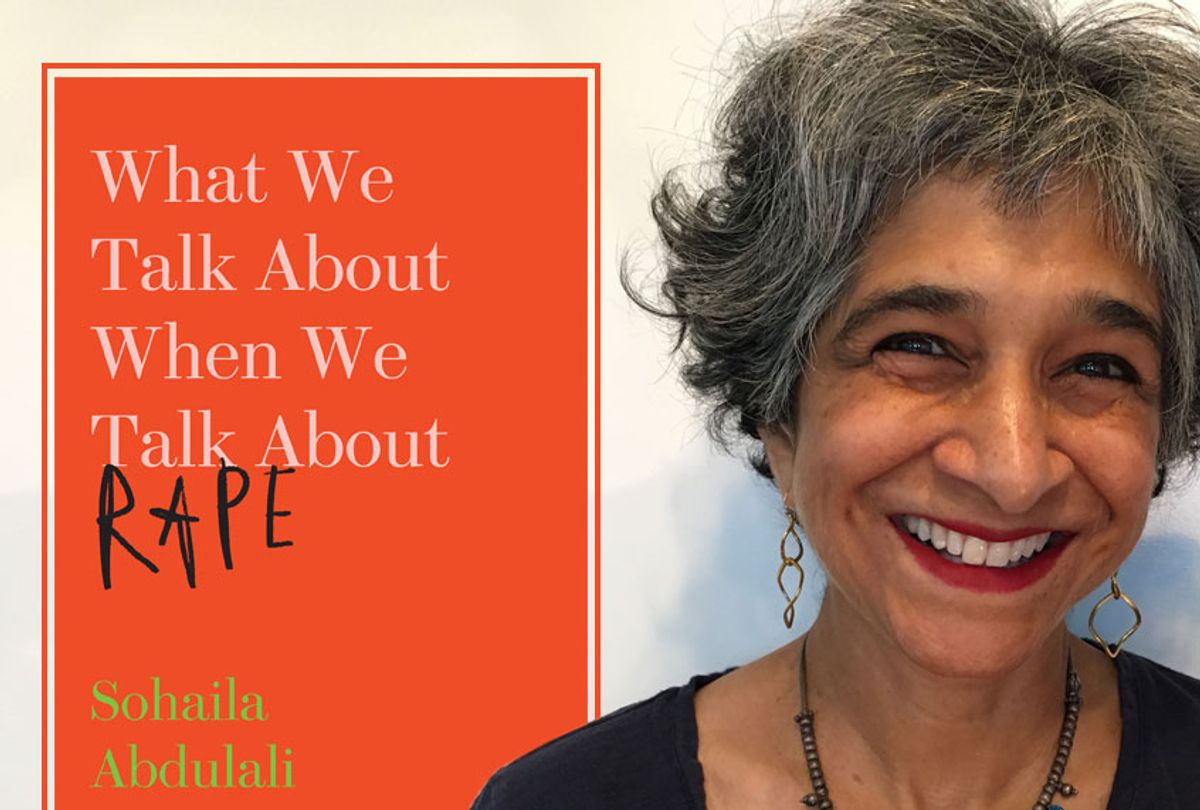 In 1980, shortly before she was set to leave for college in the United States, Sohaila Abdulali was taking an evening walk in Mumbai when she was gang raped at gunpoint, beaten and nearly murdered. But as the acclaimed novelist says in her new book, "What happened later is far more interesting."

In the immediate aftermath of her assault, Abdulali noticed a newspaper report of a woman who'd been similarly abducted, but who'd returned home and immolated herself as her husband watched. Struck by the media's "admiring" account of woman's actions, she asked herself, "Why did her suicide make her the hero of this story?" Just three years after, she wrote an article under her real name for an Indian magazine in which she provided a detailed account of her rape, and the plea that "We must stop mystifying rape. We must stop shrouding it in secrecy, and must see it for what it is — a crime of violence in which the rapist is the criminal."

Decades later, when the story of a female student who'd been gang raped on a Delhi bus and subsequently died of her injuries made headlines around the world, Abdulali penned a viral op-ed for the New York Times on sexual assault, in which she again asserted, "We need to put responsibility where it lies: on men who violate women, and on all of us who let them get away with it while we point accusing fingers at their victims."

Now, in "What We Talk About When We Talk About Rape," Abdulali continues to explore the evolving conversation around rape, weaving reportage, tales of other survivors and her own intelligent and impassioned understanding of the subject matter. She explores our often broken legal system, the barriers to open conversation and the costs extracted for both silence and speaking out. Salon talked to her recently via phone about her new work, and the crime that changed the path of her life.

So much has already been said about sexual assault. How do we approach this topic in a more comprehensive way than we have in the past?

Rape is always about power, and it is always about violence. There's no question. I also think that it's impossible to leave sex out of the equation, because there are certain circumstances that start off at sex, and there's no denying that. Then there's a point at which it's no longer sex; it's rape. There are too many people in the world who actually think they are the same. So you have to talk about both of them to show people that they are not the same. You can't make the argument unless you understand that there's a connection, at least in people's minds.

One thing you address in your book is our American "disaster prevention" approach to sex education. It seems to teach an idea that sex is a negotiation, and that women are inherently reluctant. I think that leads to an expectation that women's default is defensive. Then you set up a world in which refusal is just part of the ritual of obtaining sex from a woman, as opposed to, women have desire. Women want pleasure, women want to be satisfied. That's part of what a healthy, normal, consensual sexual encounter would look like.

We usually can't talk about [rape] without sometimes bringing sex into the equation. Not because it is sex — it's not — but because it's an act of sexual violence. And you have to understand people's attitudes towards sex in order to understand it.

That's why it's really important to talk about rapists as human beings and not faceless predators in ski masks. Because your rapist can be your boyfriend, your girlfriend, your uncle. When we think of rapists as the Golden State killer who breaks into your house and ties you up, we lose the nuance of seeing that there are rapists walking around us every day. How do we change that?

By accepting the thing about rapists that we accept about every other kind of criminal. Somebody is not 100 percent rapist, separate from being human. We have to accept that human beings are very complicated people, and that it's very hard to take a person and call them pure good or pure bad. So, it's hard to accept that, but it's true. I'm just writing a piece today, in which I'm talking about how we talk about humanizing rape victims saying, "Oh, it could be your sister, your mother, your daughter." But so could be the rapist. The rapist could be your brother, your father, your son. They could still be a good brother, father or son, and they could still do this horrible thing. Both those things can be true.

How do you feel we can move forward now? It feels like we have reached a watershed moment in the last couple of years.

I guess we have. We just have to all watch ourselves, and we have to watch ourselves at home. How we talk to our kids. How we listen to them. I don't know how we can change it, but we have to just keep on talking and writing.

My daughter is part of a Take Back the Night group at her university. I can't believe 30 years after I was in college, we're still trying to take back the damn night. What, if anything, has changed?

Not much has changed. But I also see the ways in which it's changed for the better.

Now we have men who go out and speak. It's not a weird thing to have a man calling a crisis center. I think there's a little more chance if it's happened to you too, you get out there and get some support at least in some places. That's a really big deal.

When I was raped, I couldn't imagine that there was single other human being in the world who it had happened to. I just somehow thought if I saw someone, I would know right away. Now, that wouldn't happen. You don't ever have to feel that same level of complete isolation.

I don't see where these droves of men are being taken down. I really don't. Most of them don't get taken down. They carry on, or they get some huge severance package and go on. It's not like the jails are filling up with rapists certainly because of #MeToo.

It's painful to talk about things. People don't necessarily want to talk about them. Then when you speak up, you leave yourself open to people's judgments. Once you get it out there, you don't really control what people say or take, and that's really tough when you've been raped. You want more than anything to have some control over your life. So you have this terrible moment of waiting to see what they say, because if they say something really awful, it's very difficult to forget that. You're going to leave yourself open when you talk about things, and you let yourself be judged.

On the other hand, there's a huge price to not talking, because then you don't even have the opportunity to get comfort and support. It’s a real conundrum.

Then the other thing is — it's not anybody's duty to speak. It's not a survivor's duty to speak out and cure rape, like an extra added burden on us. I'm finding this now with the book, I love talking about the book, I'm really interested in this topic. But I don't really feel it's my role to have the answers.

The really serious potential consequences, the violence, the retribution that a victim can face for speaking out, are terrifying. Then, your best case scenario really is you speak out and maybe you have some modicum of justice. Then that's your identity. "Rape survivor" is now attached to you, whether you want it or not, and you don't really get to have a day off from being "rape survivor."

That's what I've said about the #MeToo movement. I no longer have to be the only one. It's great. Now I can be the expert and the writer. I don't have to be totally a survivor any more.