"Impeach the motherf**ker": Maybe not, but the new Congress is already exciting

Beyond all the scolding and media blowback, Rashida Tlaib's viral moment speaks to big change in Washington 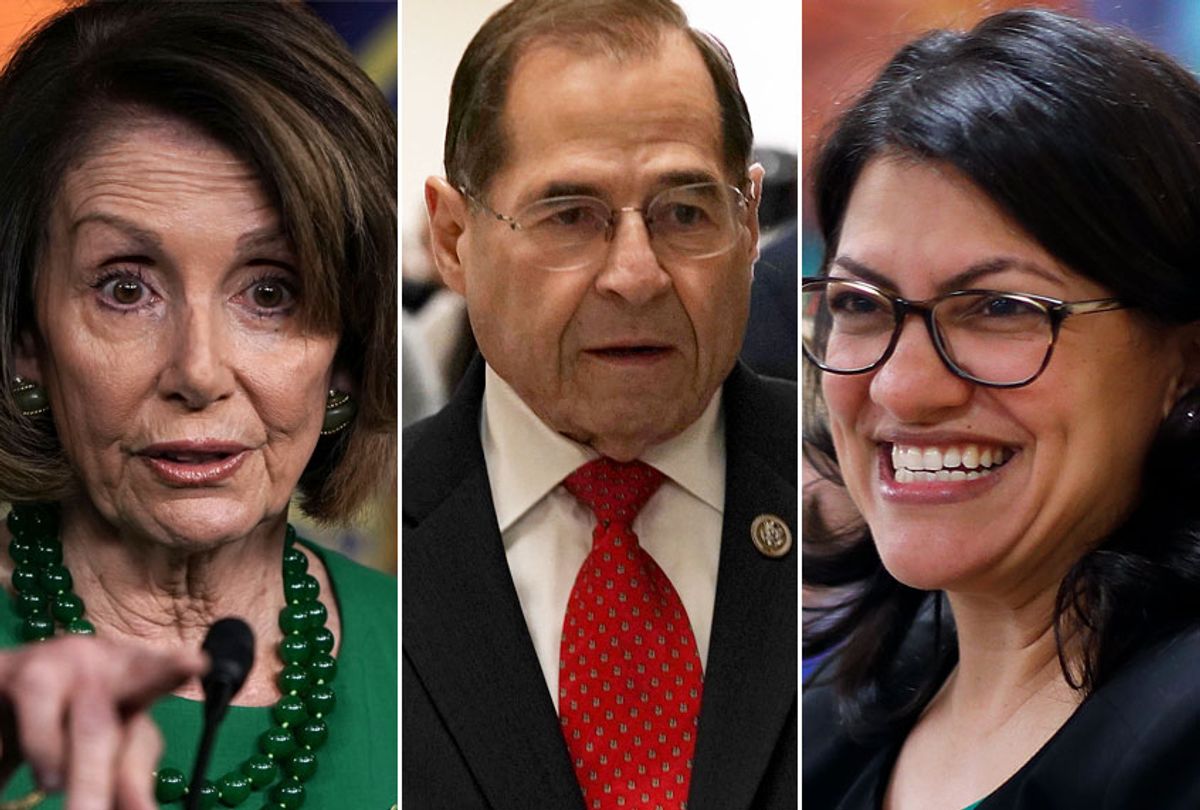 If you haven’t been living in an underground cavern—and perhaps even if you have—you probably know that Rep. Rashida Tlaib, a newly-elected Democratic congresswoman from Michigan, became the focus this week of what is known in the pundit trade as a “media firestorm.” One could certainly use other phrases: a collective undie-bundle, perhaps, or a ritual clutching of the pearls.

First of all, let’s state the obvious: Tlaib was channeling the collective voice of the liberal-to-progressive wing of the Democratic Party when she told the crowd at a MoveOn celebration on Thursday night, after the new Congress was sworn in, that “we’re gonna go in there and we’re gonna impeach the motherfucker.”

There is intense activist pressure on the new Democratic House majority, both behind the scenes and in public, to begin impeachment proceedings against President Trump as soon as possible, with or without Robert Mueller’s forthcoming report. Members like Tlaib, one of two professed democratic socialists in the new Congress (the other being “Sandy,” from my New York district), are especially susceptible to this pressure, and have nothing to lose. They’re ready to roll.

There are some strategic and political questions here, of course. Frankly, they aren’t that interesting. Should the Democrats shut up about impeachment and focus on passing legislation (which, given the current situation, will go nowhere)? That’s debatable, but clearly not happening. Can Speaker Nancy Pelosi and Judiciary Committee chair Jerry Nadler, a pair of wizened old operators eager not to open that particular Pandora’s box, keep the lid on the impeachment caucus? Sure they can, for a while. You will note that neither of them joined in the chorus of feigned outrage over Tlaib’s language, during which we were supposed to pretend that we could not imagine politicians describing their adversaries in such terms, and focused instead on the substance, which from their point of view is the dangerous part.

But there’s more to this cultural flashpoint than whether or not “the motherfucker” should be impeached, and whether or not Tlaib, in the New York Times’ consummately irritating formulation, had “upend[ed] Democrats’ talking points” on their first day in power.

Here’s one big thing we should stop and acknowledge: Rashida Tlaib, a Palestinian-American woman from Detroit who was the oldest of 14 children and whose dad worked the assembly line in a Ford plant, is now a member of Congress. She’s not just one of two socialists in the new House delegation but also one of the first two Muslim women (the other being Rep. Ilhan Omar of Minnesota, also sworn in this week). Setting aside all that, as a 42-year-old single mother with working-class roots from a heartland state, Tlaib is almost a perfect representative of the most diverse freshman class in congressional history.

So it’s not exactly a coincidence that Tlaib found herself in the spotlight this week — or rather, if it is a coincidence, it’s a symbolic and instructive one. The congressional handover on Capitol Hill on Thursday was a dramatic and historic spectacle, with an emotional impact I’m not sure anyone saw coming. Much of the pregame analysis was about whether Nancy Pelosi had enough votes to win the speakership, because most American political reporting is focused on individuals and electoral contests, rather than on what actually happens.

Pelosi’s election was almost an anticlimax, although she deserves credit for an extraordinary level of persistence and resilience. But she wangled herself back behind the gavel only by promising to retire in four years, and it was the on-stage arrival of the new Democratic House majority — dramatically younger, more female and more racially and ethnically diverse than any previous party caucus in the institution’s history — that felt like a watershed, the end of an old epoch and the beginning of a new one.

For women, for people of color, for immigrants and for urban-progressive types more generally, this was huge. Whether this Congress can accomplish much of anything, in the current context, is doubtful. What it represents, on the other hand, is extremely powerful.

But that signal was also clearly received, in a more unsettling register, by other Americans as well. I couldn’t help flashing back a decade, to the inauguration of Barack Obama on a much colder January day in 2009, because this event is in many ways a sequel to that one.

Obama was elected president, let us remember, as a non-ideological consensus-builder, determined to overcome the bitter partisan division of the George W. Bush years and get things done. Ha ha ha, I know. That dream died early and fast. Even before Obama’s inauguration, it was becoming clear that Republicans had no interest in cooperating with him on anything, and had decided that their path back to power lay in all-out obstruction, relentless negativity and poisonous rhetoric.

None of that was brand new, even at the time: Mitch McConnell, then leader of the Republican Senate minority, pretty much followed the path of resistance blazed by Newt Gingrich under Bill Clinton in the mid-1990s. But in the story of the Republican Party’s long, slow descent into madness, 2009 was an important plot point: In the wake of sweeping electoral defeat, the GOP turned its back on a new president who had promised compromise and negotiation, and who was widely perceived as a transformative historical figure. (Even Obama himself, I suspect, thinks the Nobel committee got a little ahead of itself in awarding him the peace prize later that year.)

In retrospect, we can say two things about that. Republicans were right, in the medium term, that casting themselves as the anti-Obama party — the party of birtherism and climate denial and thinly veiled racism and anti-government paranoia — was politically advantageous. They won back the House in the Tea Party midterms of 2010, and captured the Senate in 2014. But old-line Republicans like McConnell didn’t quite understand the nature of the bargain they were making with their voters, which led inexorably to President Donald Trump and the total abandonment of any last semblance of “conservative principles.”

If the Democratic president who took office in 2009 had been a white man, would the political opposition have been as forceful? Possibly. Would the conspiracy theories have been less elaborate and unhinged, and the right-wing grassroots counterrevolution less ferocious? Let’s not pretend we don’t know the answer to that one.

For a large proportion of white Americans outside metropolitan areas, the election of a black president with a foreign-sounding name and a peculiar, globetrotting life story was — as we now understand — profoundly disorienting. It felt illegitimate, like a military coup or a foreign conquest, which is one way of framing the far-right obsession with Obama’s birthplace and constitutional eligibility. Like every other journalist with a published email address, I received numerous lengthy treatises meant to prove that Obama had never actually been president at all, and the real president was someone else, usually Sarah Palin. (Those were a lot like QAnon posts, written years in advance.)

Those who felt alienated or terrified by Barack Obama and embraced Donald Trump as the savior of white America must be doubly or trebly freaked out by all these strange people who now have “Rep.” in front of their names — people like Rashida Tlaib and Ilhan Omar, whose gender, skin color, ancestry, religion and ideology do not resemble traditional expectations for a “congressman.” It’s not accidental that Donald Trump reserves his worst Twitter mockery for female politicians who oppose him, especially women of color, whom he invariably describes as ignorant or stupid. He’s sending a none-too-subtle signal to his supporters, meant to reassure them that their baked-in prejudices are correct: These ladies are fakes, not real political leaders; the system that elected them must be a sham.

So there’s enormous resonance to Rashida Tlaib — a woman, a Muslim and an American from the real working class — going viral by calling this particular president a bad word and promising to drive him out of office. She already doesn’t look like a member of Congress (to certain audiences) and now she’s refusing to act like one.

There’s no way to separate the exaggerated reaction to Tlaib’s remarks from the fact that her presence on Capitol Hill, and even her existence as an American citizen, pushes people’s buttons. (CBN, the evangelical news network, described her as “a foul-mouthed Islamic congresswoman.”) If Beto O’Rourke said exactly the same thing? It would be received in some quarters as “bold” and “ballsy” and perhaps “Kennedy-esque,” and the right-wing whinging would be a lot feebler, with less fire and pitchforks.

You can make a case, in the abstract, that it’s better not to say stuff like that. Jonathan Chait of New York magazine, oracle of the Democratic center-left, pronounced Tlaib’s remarks “a gift to Trump,” and I understand the tedious logic at work: In the interests of long-term political stability, Democrats need to be the adults in the room and the party of responsible governance, observing and respecting those famous “democratic norms” that Random Capitalization Man and his acolytes keep enthusiastically pissing on.

Well, maybe. But also maybe not. Of course Fox News and every other right-wing media outlet are gleefully holding up Tlaib as evidence that Democrats are just a bunch of dark-hearted haters obsessed with destroying Trump (a classic case of projection), while cable-news natterers tie themselves in knots decrying the supposed coarsening of the supposed discourse. But you know what? They would have found excuses to do that anyway. If one intemperate remark by one left-wing congresswoman is enough to drive all those anxious suburbanites who voted Democratic in November back into Trump’s mealy embrace, then America is well and truly not worth saving.

Rashida Tlaib can’t impeach Trump by herself, as she is clearly aware. If I had to put down money, I’d bet that Democrats won’t go down that road at all, no matter what the Mueller report says, and will let the 2020 election cycle play out against (they hope) a badly wounded and widely despised incumbent. Tlaib was mostly letting off steam, on behalf of the millions of Americans who cannot believe that anyone finds this corrupt and delusional bigot an acceptable president.

But the larger point might be that Tlaib speaks for a growing constituency within the Democratic coalition that has had quite enough of middle-path compromise and managerial competence and going high when the trolls and hobgoblins go low. That might especially be true for women and people of color, who already know they are held to a different standard and no longer feel the need to pretend otherwise.

This isn’t so much about the ideological divisions in the Democratic Party, although Tlaib is arguably to the left of Bernie Sanders on many issues. It’s more about the party’s lack of passion and vision, and its terminally vague and unfocused rhetoric. Tlaib belongs to a rising political generation that witnessed the pioneering examples of Barack Obama and Hillary Clinton, saw how carefully they had to tread and how hard they worked to present themselves as reasonable, pragmatic moderates — and saw how they were villainized as frauds, despots and criminals, leading to the election (let us note) of a real-life fraudulent criminal and would-be despot.

Whatever mistakes Rashida Tlaib and the rest of the Democratic newcomers may make, they won’t make those. Will they impeach the MF? Not likely, although the sentiment is invigorating. But they’re going to speak their minds, on behalf of the people and movements who elected them, with no fear about how swing voters will react and no concern for imaginary standards of decorum that the other party has long ignored and the current president has smashed into rubble. It’s about goddamn time, isn’t it? This Congress will be exciting.