Federal employee uses crowdfunding to cover missing salary. This is not an inspirational story 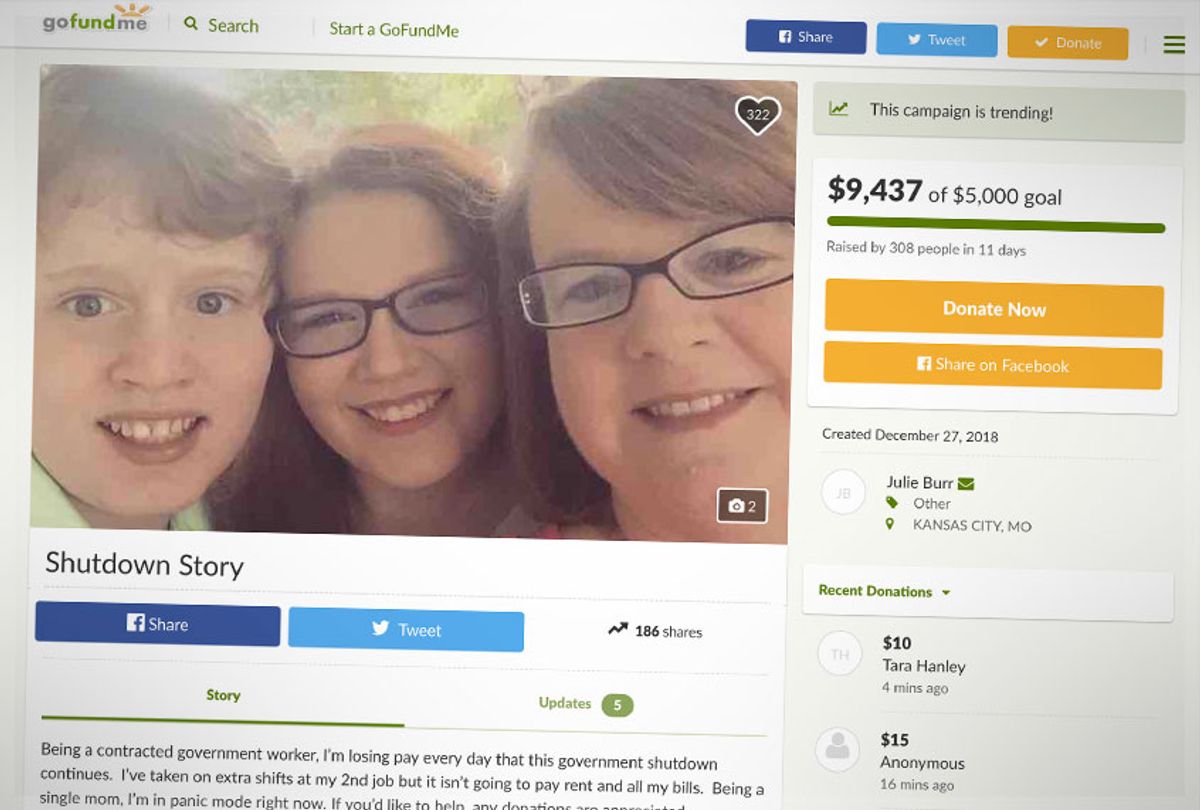 Julie Burr, a federal contract worker for the Department of Transportation, said she set up a GoFundMe page to help pay her bills, as she's been without pay and work as part of the ongoing government shutdown. During an interview with CNN on Monday, Burr, who lives in Kansas City, MO, said that she has also been unable to submit her timesheet for 63 hours of work prior to the partial shutdown due to the shuttering of departments.

She said someone advised her to set up the GoFundMe to help subsidize her essential bills like rent and utilities, and she was able to raise the equivalent of two months' pay. “Right now I’m relying on that," Burr said. "I know there are many that don’t have that option, though.”

When asked to respond to President Trump's comments from Sunday when he said that he could "relate" to the federal workers who have been forced to go without pay for 17 days and counting, Burr replied, "I find it hard to believe that a billionaire could relate to anyone who lives possibly paycheck to paycheck, which many of the American people do."

In his comments to reporters, Trump added, "I’m sure that the people that are on the receiving end will make adjustments" and that many of the hundreds of thousands of workers affected by the partial shutdown "understand exactly what’s going on" and, he said, "many of those people agree 100 percent with what I’m doing."

Burr's use of GoFundMe to subsidize her missing federal pay builds on a disturbing trend of using crowdfunding sites to raise money to fund basic needs for survival. Over the past few years, we've seen a rise in people using GoFundMe or other similar crowdfunding sites to ask for help with medical bills (currently the single largest crowdfunding category), funeral costs, relocation, and now, with the government partially shuttered, salaries.

"The total amount in donations generated by crowdfunding sites has increased eleven­fold since the appearance of Obamacare," Mother Jones reported. "In 2011, sites like GoFundMe and YouCaring were generating a total of $837 million. Three years later, that number had climbed to $9.5 billion. Under the Trump administration, YouCaring expects donations to jump even higher, and the company has already seen an estimated 25 percent spike since the election, which company representatives believe is partly a response to the administration’s threats to Obamacare."

Tragically, the media tends to frame these sensationalist and sometimes devastating stories of loss, illness, pain, or unemployment as inspirational success stories when an individual manages to raise their goal amount, instead of highlighting that the government continues to fail in providing the fundamental tools of survival to so many Americans, most especially to those who are low-income and/or people of color.

In her 1976 essay "Notes from a trip to Russia*," Black feminist poet and writer Audre Lorde recalls a Russian man approaching her to confirm that all Americans have to pay for doctors and medical care. "Ah, he said. And suppose you don't have the money to pay? Well, I said, if you don't have the money to pay, sometimes you died," Lorde wrote. "And there was no mistaking my gesture, even though he had to wait for the translator to translate it. We left him looking absolutely nonplussed, standing in the middle of the square with his mouth open and his hand under his chin staring after me, as in utter amazement that human beings could die from lack of medical care."

In our current economy where wealth inequality only grows as the middle class dissipates, the consequences are potentially just as dire for the hundreds of thousands of federal and contract workers like Burr who are now forced to work without pay.  As Burr pointed out, many Americans live paycheck to paycheck due to stagnant wages and bloated costs of living, including those who work supposedly "good" government jobs. According to CNBC, 34 percent of adult Americans have zero savings and 35 percent have only several hundred dollars saved, which in most parts of the country is not even enough to cover one month of rent.

And right now, their survival is on the line. Trump and other wealthy lawmakers — most of whom have not gone without pay themselves, — continue to demonstrate their privilege by suggesting that unpaid workers can simply "make adjustments" and be OK during an ongoing government impasse that they have caused and which is showing no signs of ending.

The current desperation of federal and contract workers and the rise of crowdfunding campaigns illuminates America's economic problem that has plagued tens of millions prior to the partial government shutdown and will likely continue long after it finishes. In the short term, crowdfunding sites help some individuals in a moment of dire need. While that is better than the alternatives — like eviction, or the loss of necessary health care treatments —  the fact that so many people's livelihoods depends on the popularity of their pain and how viral they can make it go isn't inspirational. It's utter government neglect.