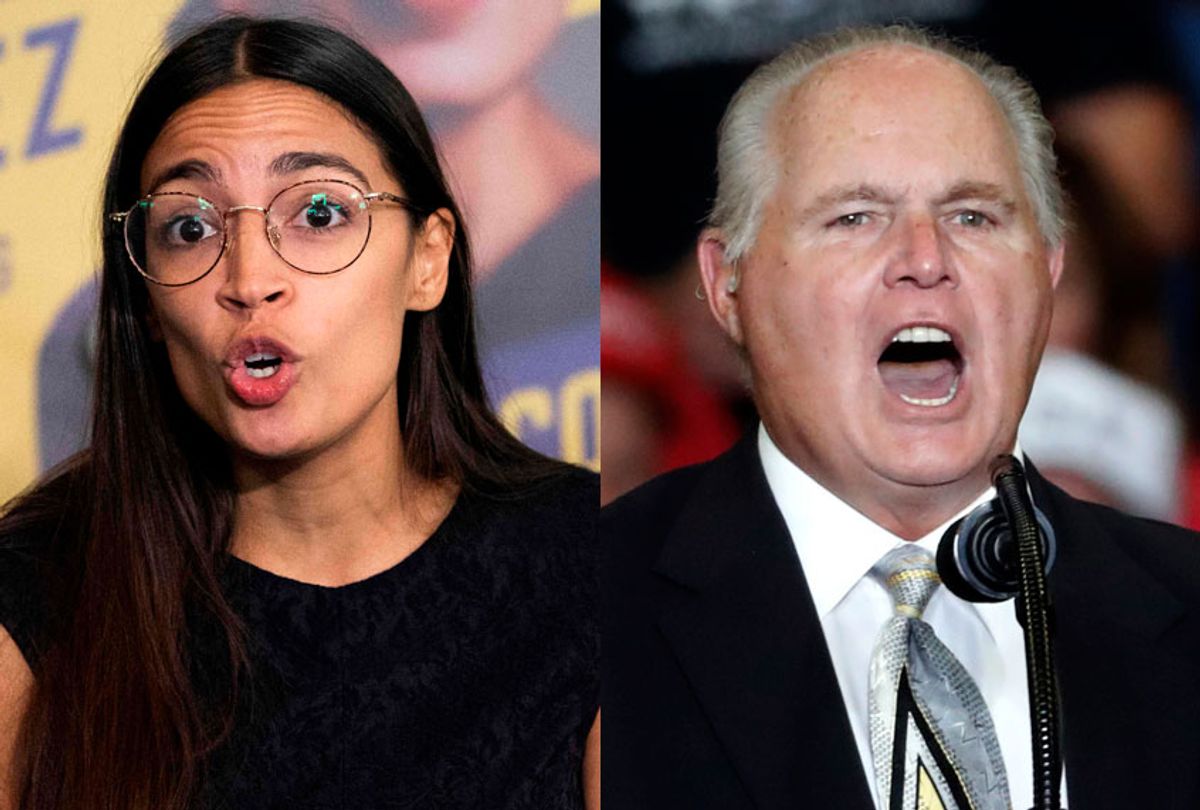 "It has become apparent to me that Pelosi and Schumer do not like Alexandria Ocasio-Cortez," according to a transcript from Media Matters for America. When saying her name, Limbaugh used an exaggerated Latino accent. "If you noticed, CNN, Chris Cillizza — our old buddy Chris, formerly at The Washington Post, now over at CNN — has just written a devastating piece about Alexandria Ocasio-Cortez, saying she doesn't know what she's talking about, saying she's dead wrong about everything, she has no facts, she poses — there's no question that that piece is the product of Pelosi and Schumer working the media. Because I'm telling you, I predicted this, that the Democrat leadership is not hip to this young, bunch of millennials pouring in here and some of these other radicals. They're not hip to it, I mean they run that party and they run the American left, and they're not going to let some young uppity come in here and upset the apple cart."

Limbaugh provided no evidence that Pelosi and Schumer were behind Cillizza's piece. More importantly, he misrepresented the substance of Cillizza's editorial, which did not claim that Ocasio-Cortez is "dead wrong about everything" but rather that she needs to own up to her factual mistakes just as President Donald Trump needs to own up to his errors. After reviewing how Ocasio-Cortez had erroneously claimed that $21 trillion in Pentagon transactions "could not be traced, documented, or explained," and how Ocasio-Cortez had told "60 Minutes" that people should not be "more concerned about being precisely, factually, and semantically correct than about being morally right," Cillizza argued that she was creating a false conflict.

Here's the thing: Being factually accurate and morally right isn't an either/or situation. You can do both!

And as it relates to the broader point Ocasio-Cortez is raising, which is, essentially, you know what I meant, so stop obsessing over a single data point, I would respond this way: Would she -- or any Democrat -- say the same about the White House's made-up fact that upwards of 4,000 known or suspected terrorists have attempted to enter the US illegally through the southern border?

The problem with that thinking is that it says that the underlying facts don't matter as long as the bigger-picture argument still coheres. Which is a very dangerous, slippery slope to tread at any time but especially in an age in which the President of the United States is actively seeking to undermine the idea that objective facts actually exist.

Ocasio-Cortez later got into a war of words with Cillizza on Twitter, claiming that he had misrepresented what she said during an earlier tweet.