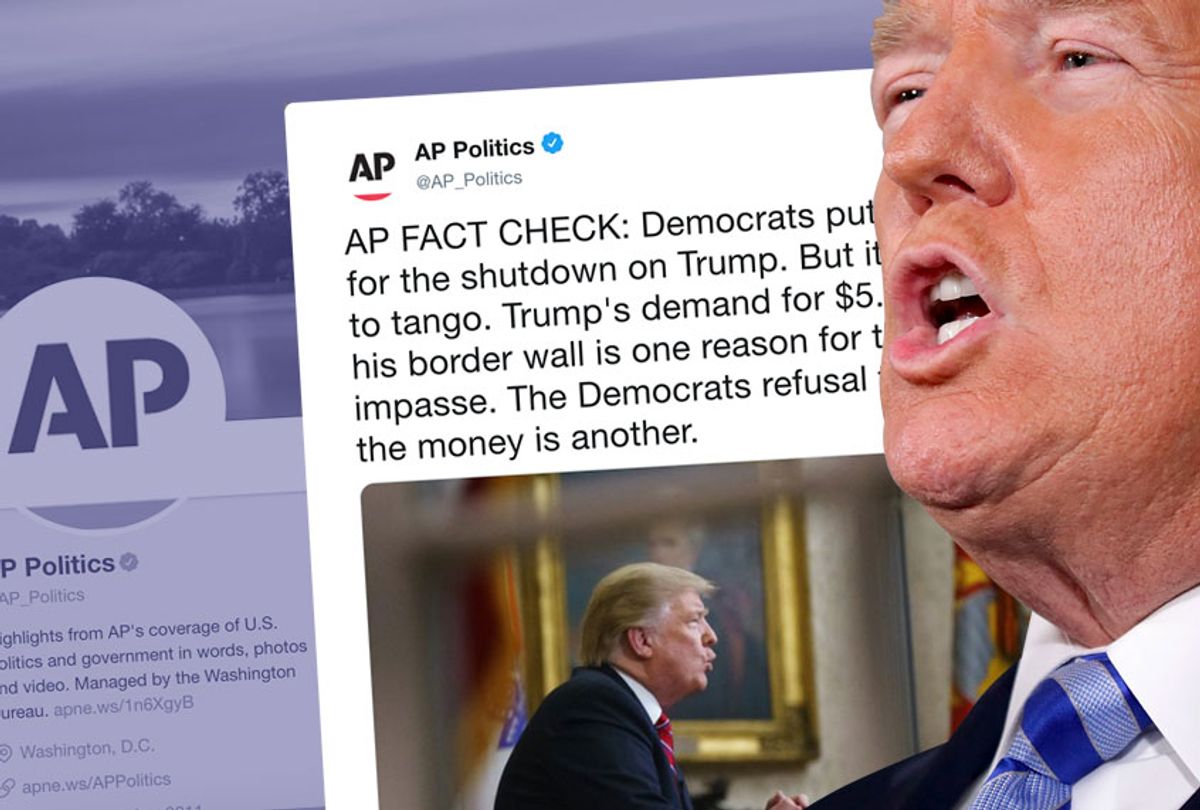 The Associated Press attempted to fact-check President Donald Trump's border wall speech by falsely conflating his culpability in a partial government shutdown with the Democrats in Congress, who were a minority in both chambers when the shutdown started. That tweet soon went viral.

Although most of the Associated Press' fact-checking article focused on misstatements made by Trump, there was one section that discussed the Democratic response to his speech, which was provided by House Speaker Nancy Pelosi and Senate Minority Leader Chuck Schumer.

HOUSE SPEAKER NANCY PELOSI: “The fact is: President Trump has chosen to hold hostage critical services for the health, safety and well-being of the American people and withhold the paychecks of 800,000 innocent workers across the nation - many of them veterans.” — response to Trump’s remarks.

SEN. CHUCK SCHUMER, Senate Democratic leader: “The president of the United States - having failed to get Mexico to pay for his ineffective, unnecessary border wall, and unable to convince the Congress or the American people to foot the bill - has shut down the government.” — response to Trump.

THE FACTS: That’s one way to look at it. But it takes two sides to shut down the government. Trump’s demand for $5.7 billion for his border wall is one reason for the budget impasse. The refusal of Democrats to approve the money is another.

Many Twitter users felt that this was an attempt to equate Democrats with Trump or to unfairly claim both sides were equally to blame for shutting down the government.

During a key portion of his speech, Trump tried to lay blame at the feet of the Democrats:

The federal government remains shut down for one reason, and one reason only, because Democrats will not fund border security. My administration is doing everything in our power to help those impacted by the situation, but the only solution is for Democrats to pass a spending bill that defends our borders and reopens the government.

In a sense, the criticism of the AP's fact-checking article is reminiscent of a famous analogy from Abraham Lincoln's Cooper Union address, in which he deconstructed the arguments holding that people who voted Republican during the 1860 election would be responsible for prompting a Civil War because southern states had made it clear they would secede if a Republican candidate won.

"A highwayman holds a pistol to my ear, and mutters through his teeth, 'Stand and deliver, or I shall kill you, and then you will be a murderer!'" Lincoln famously opined. "To be sure, what the robber demanded of me—my money—was my own; and I had a clear right to keep it; but it was no more my own than my vote is my own; and the threat of death to me, to extort my money, and the threat of destruction to the Union, to extort my vote, can scarcely be distinguished in principle."