Damned if they do: Trump played TV networks with dishonest address and they fell for it again 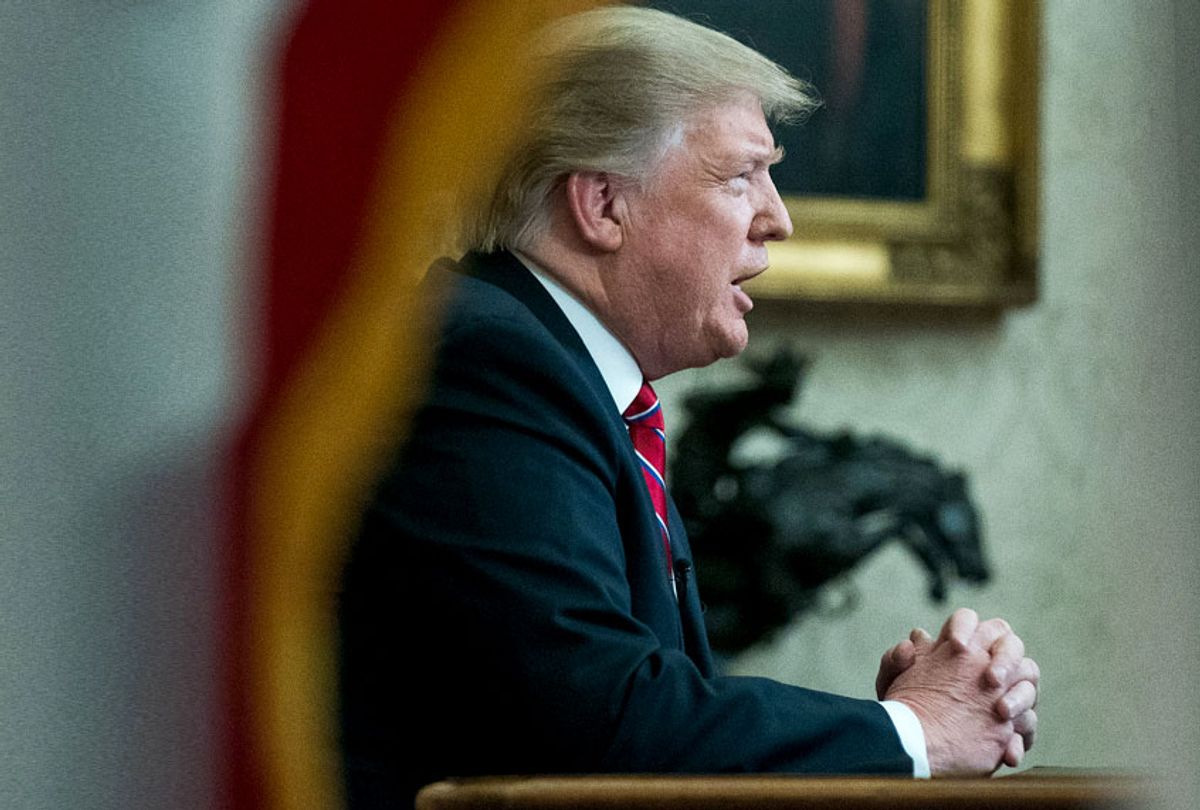 President Donald Trump speaks to the nation in his first-prime address from the Oval Office of the White House on January 8, 2019 in Washington, DC. (Getty/Kevin Dietsch)
--

Following Donald Trump’s Oval Office commercial for the wall, which interrupted Tuesday prime-time programming on the East Coast, MSNBC host Rachel Maddow turned to her colleagues Chris Hayes and Nicolle Wallace and asked the question likely to have been on many minds.

“Why did he just do this?” Maddow said. “Why did this just happen?”

The simplest answer to Maddow’s question is because her boss, and the executives at CNN, ABC, CBS and Maddow’s broadcast sister NBC, let it happen. Fox also aired Trump’s speech, no surprise there.

Other answers as to why broadcast networks agreed to air his 10 minutes of rhetoric scapegoating immigrants and lies are more distressing.

Why? Because Trump needs the publicity for his 2020 campaign. The combined broadcasters and cable news networks gave him billions of dollars’ worth of free media coverage during his 2016 presidential campaign. Tuesday night ABC, CBS and NBC, MSNBC, and CBS threw in a few million more at the top of the nine o’clock hour, Eastern Time.

Why? Because it’s Trump, and no TV news organization has learned that it is their duty to say no to a President who consistently defies norms and has no intention to stop smearing the press as enemies of the people.

“As the leader of the free world, it’s the president’s right to address the nation,” a network executive, who spoke on the condition of anonymity, told the Washington Post. That should tell you something — mainly that the people making such decisions, all of them wealthy, know that what they are doing is shameful. (They also know that pleasing Trump ultimately benefits their own wealth portfolio.)

As a reminder, in 2014, NBC, ABC, CBS and Fox refused to carry Obama's speech outlining his executive actions on immigration during prime-time because they didn't want to cede valuable ratings real estate.

Nobody said that out loud, understand. The official reason was a concern over appearing “partisan” by granting airtime to a Democratic president over an issue that split Congress down party lines.

And the legacy broadcast networks still harbor such concerns, with an added fear of confirming Trump’s accusations of “fake news” and being the “enemy of the people.” On Monday CNN media critic Brian Stelter underscored this, sharing the contents of an unnamed TV exec’s text on Twitter.

Damn us all, then.  After a few hours of supposedly intense deliberation CBS caved, with the others following suit directly after.

A number of media analysts have suggested, pleaded and demanded with TV news organizations to uphold their obligation to keep the public informed with facts and data-based assertions, journalistic practices considered to be a given, more or less, under previous administrations.

But although Trump has played the media time and again, pushing lies and divisive, racist propaganda while painting news organizations as dishonest, TV news departments keep coming back for more.

Hence on Tuesday, the prime-time flow halted for Trump to stodgily address the nation, via teleprompter, about what he calls “a humanitarian crisis — a crisis of the heart and a crisis of the soul.” But nothing he said made a substantive case for Congress to give him the $5.7 billion he wants to build the wall, over which he decided to hold hostage the financial well-being of some 800,000 federal workers.

During his speech Trump repeated a number of long debunked misleading statements, among them the myth that “the wall will also be paid for indirectly by the great new trade deal we have made with Mexico” (it will not) and that 90 percent of the heroin that comes into the U.S. “floods across from our southern border” (and mostly from legal points of entry, meaning a wall would not stop that).

None of the networks called upon more than Democratic leaders Nancy Pelosi’s and Chuck Schumer’s stiff joint rebuttal to refute the numerous falsehoods stitched into his speech. (That said, Schumer’s statement that “we don’t govern by temper tantrum” was a fine burn.)

Sure, ABC made a good-faith if speedy attempt to fact-check Trump between his speech and the Democratic response, a sight better than CBS’ tactic of game-planning what’s to come next with the shutdown. Inadequate as that was, brandishing the president’s talking points via chyrons as their correspondents rambled without contradicting those statements was downright irresponsible.

Generally speaking, the networks left the fact-checking to their online arms, other journalistic organizations and, well, cable news. This was always going to be the problem with the networks giving Trump a prime-time slot: they knew he was going to lie, and yet they didn’t prepare themselves to address those lies in the moment.

Using the classic post-speech wrap-up coverage is useless with this president, and within the network format. Cable news has all the time in a day to break apart 10 minutes of misinformation, making Tuesday’s speech little more than a fresh bushel of grist to them. As for NBC, CBS and ABC, allotting 30 minutes for a statement from the Oval Office and a response leaves insufficient time to dig in, refute the lies and set the record straight.

Knowing they were going to lose this battle, yet committing to the route anyway, maybe the networks thought they didn’t need to go through the trouble of live onscreen fact-checking. The Americans who don’t believe anything Trump says wouldn’t pay attention anyway, and the ones who do wouldn’t believe what the “fake news” has to say anyway.

Miserably, though, the networks would rather attempt to please the anti-mainstream media crowd than take a stand and refuse to amplify a poisonous anti-immigrant agenda.

CNN employed the usual gig of calling upon a panel pick apart Trump’s lies for the millionth time, with the Toronto Star’s diligent Washington correspondent Daniel Dale taking on the main breakdown. Meanwhile Maddow, Hayes and Wallace traded expressions of bafflement on MSNBC, followed by a scathing rebuttal by guest Rep. Alexandria Ocasio-Cortez (D-NY). On Fox, Sean Hannity and friends, including South Carolina Senator Lindsey Graham, basically recapped Trump’s statement without question. Over there, they leave the questioning to Chris Wallace, don’t you know?

Graham, in fact, opined that Trump’s demonstrated ability to read from a teleprompter made him look more presidential than ever while marveling that everything he said was true.

This was another lie, but the broadcast networks were not the place to find that out.

Nor, for that matter, did they bother to reveal that hours before they granted Trump airtime to lie frequently and brazenly, the Trump Make America Great Again Committee, a joint fundraising committee for his re-election campaign and the Republican National Committee, was capitalizing on the exposure to fundraise, via an email sent to his supporters.

Even as he holds 800,000 federal workers and their families for ransom, Trump and Republicans found a way to make money off the nation’s collective fear and misery.

“Most presidents have used Oval Office addresses for noble purposes,” Schumer observes. “This president just used the backdrop of the Oval Office to manufacture a crisis, stoke fear, and divert attention from the turmoil in his Administration.”

Why, again? For Wallace, the answer is simpler and, as she tells Maddow, more primal. Trump lives in abject terror of his base and Robert Mueller. He can’t control Mueller, she observes, but he can gin up his base.

“The big scam of the whole address is that there is a crisis,” Wallace said. “There is no crisis.”

Not on our Southern border, maybe.  But if our news organizations keep caving to a President skilled at manipulation and fond of an authoritarian style of governance, there will be.