Why are the networks giving Donald Trump airtime to sell his racist lies?

George W. Bush lied us into Iraq. Now Trump's trying to lie us into a border wall. Why does this keep happening? 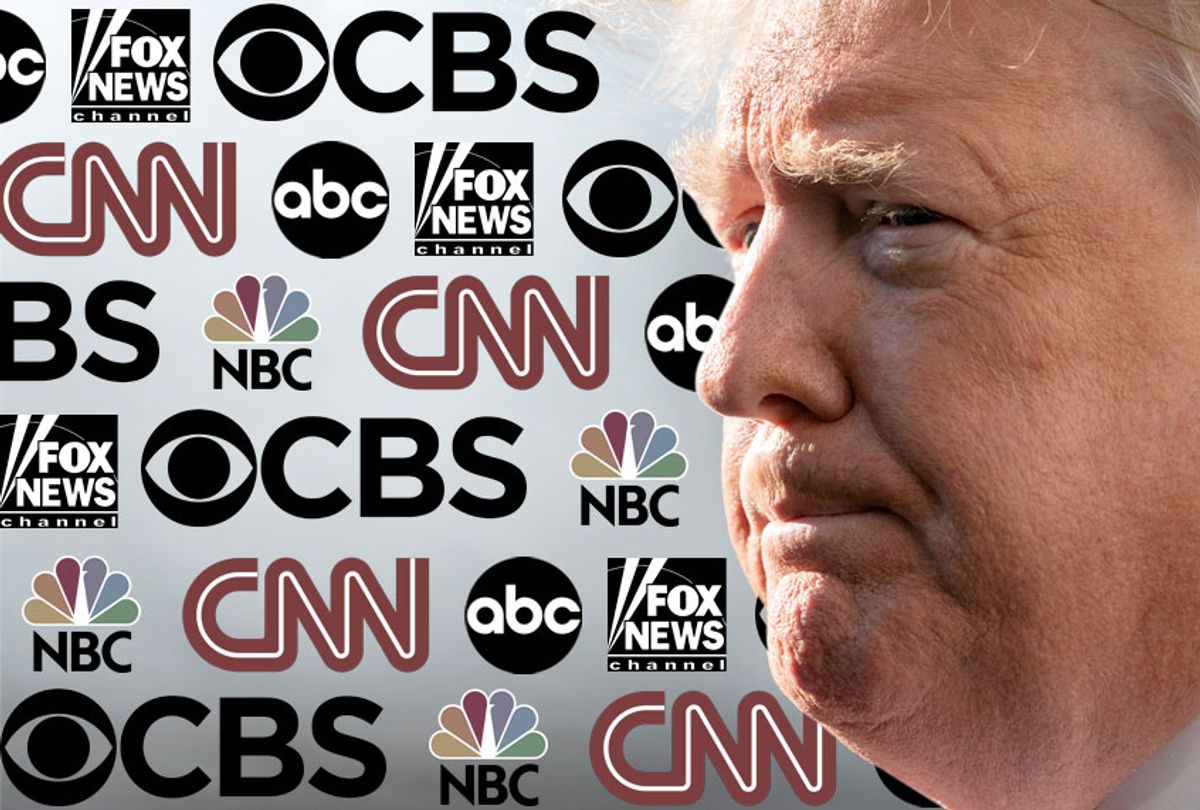 Supposedly, the decision was a hard one -- but now the major broadcast networks have all agreed to hand free air time over to Donald Trump so he can push outrageous falsehoods about his proposed border wall and spread racist propaganda about refugees fleeing violence in Central America.

"Mr. Trump’s request that the major networks broadcast his speech live set off a day of tense deliberations at ABC, CBS, NBC and Fox," the New York Times reports. "Some journalists worry that handing Mr. Trump a chunk of network prime time could allow the president to assert falsehoods to tens of millions of viewers."

There is no "could" about it. What will happen on Tuesday night is entirely predictable: As he has been doing for weeks now, Trump will lie. He will lie a lot. Trump spent the entire 2016 campaign lying. He has spent his first two years in office lying. His rate of lies has been accelerating at  an astonishing rate, and he averaged 15 lies a day in 2018. He will almost certainly tell more lies than truths during his prime-time showcase. It's entirely possible that he makes it through the entire address without saying a single substantive thing that is true.

Unlike most of the lying Trump does — on Twitter, talking to reporters — this won't be a bunch of confusing, rambling musings. This address will be written for him, so the racism and mendacity will have a coherence usually absent from most of this president's spoken (or tweeted) communications. Which in turn will make his lies — which, again, are not "possible" or "probable," but certain — all the more convincing.

Networks would like the public to believe this decision was difficult, but the sheer number of networks who have signed on (ABC, CBS, NBC, Fox, CNN, MSNBC and Fox News have all agreed) and the swiftness with which they did so suggests that it wasn't a hard decision at all.

The excuses on offer by the networks are laughably transparent. The New York Times writes that the networks "were uncomfortable turning down the president amid a national event affecting millions like the government shutdown" and thought that refusing him could "open the networks to accusations of partisan bias."

These excuses were swiftly punched through by more responsible journalists, who pointed out that networks denied Barack Obama a televised address on the immigration issue in 2014, saying they were fearful of looking partisan. Somehow the only way to appear "nonpartisan," it would seem, is to consistently favor Republicans and disfavor Democrats.

In addition, the excuse that the networks fear such accusations is doubly silly in an environment where Trump accuses the media of being "fake news" no matter what they do. Right-wing hate-mongering toward the media will not be reduced by kowtowing to Trump's lies, because Trump's interest is in getting his followers to distrust all media and only trust him. By broadcasting his speech, the networks are aiding and abetting that agenda.

A number of Trump critics bought this line that networks were intimidated by Trump's bullying, but I'm not buying it. The decision to hand over airtime to Trump was likely not made by the ordinary TV producers who make daily decisions about what to cover, but went up the chain to the top executives at these networks.

In other words, the decision-makers are a bunch of extremely rich people (mostly rich white men) who are beneficiaries of Trump's massive tax cut for the rich — a tax cut they are surely aware the rest of the public disapproves of, and will likely continue to hate more and more as the years go on and income inequality is exacerbated.

Despite his crudeness, it's been clear for some time why Republicans have overwhelmingly fallen in line behind Trump. Actual Republican policies are widely unpopular with voters, who understandably don't like income inequality and being deprived of basic amenities like health care and proper environmental regulation. But Trump's election has appeared to offer a way forward: By appealing to the racist paranoia of aging white voters in rural and suburban areas, which have disproportionate electoral power, Republicans can get the votes necessary to hold power without bothering to adopt policies the public actually likes.

It's not a big leap from there to suggest that wealthy network executives who benefit from Trump's tax cut are capable of making the same calculation.

It's worth noting that this decision to give Trump airtime so he can whip up viewers by lying to them about a "crisis" on the border happened on the same day that much of the news cycle was consumed by discussion of raising the taxes on the rich.

Newly elected Rep. Alexandria Ocasio-Cortez, D-N.Y., dominated headlines and news coverage by suggesting, during a weekend interview with Anderson Cooper for "60 Minutes," that a 70 percent marginal tax rate on the super-wealthy -- which would not even be close to the highest in American history -- would be appropriate. Her comments led to numerous articles explaining that, conservative lies to the contrary, this would not mean that all your income was taxed at that rate, just whatever you make above a stated level -- in this case, an annual income of $10 million. It also led to economists like Paul Krugman pointing out that Ocasio-Cortez isn't being especially radical, but is promoting an idea that is popular among economic experts.

For very rich people who want to make unbelievable amounts of money without paying their fair share of taxes -- such as, let's say, the top executives at TV networks -- this was a good moment for a major distraction. Luckily for them, Trump has one on offer: A bunch of hysterical lies about dark-skinned immigrants who are supposedly "invading" the United States.

Some might dismiss this as paranoid thinking, but Vox co-founder Matt Yglesias also sees this as a logical explanation:

The country has been down this path before: Leaders creating fake emergencies in order to browbeat the public into accepting truly radical proposals. The most recent example would be the Iraq war launched in 2003, a horrendously expensive and self-destructive quagmire from which our country has still not fully extricated itself.  George W. Bush and his administration rolled out a breathtakingly cynical campaign of misinformation, exploiting the national trauma of the terrorist attacks of 9/11, and frightened the public into believing we were on the cusp of being attacked with weapons of mass destruction by Iraqi dictator Saddam Hussein.

The media's willingness to play along with Bush's misinformation campaign was a central factor in the tragedy. Despite overwhelming evidence suggesting that Bush was ginning up a fake crisis in order to justify a war, the media largely played handmaiden to the administration's deceptions, exaggerating the possibility of Hussein's weapons of mass destruction and minimizing the red flags that suggested this was a manufactured crisis.

Why the media was so willing to roll over for Bush continues to be a mystery, but there was no real reckoning for their enormous mistakes, even after Bush's lies were exposed and no weapons of mass destruction were found in Iraq. But it's worth noting that, as with Trump, Bush had signed a massive tax cut that primarily benefited the rich while exacerbating economic woes for everyone else.

I think it's possible to argue that average journalists and editors, who are more likely to have middle-class incomes, learned a hard lesson from the Iraq debacle about not putting too much trust in lying presidents. So Trump is getting a lot more skepticism than Bush did, and the public is thankfully more aware of Trump's deceptive nature. (It also doesn't hurt that Trump is a more overt liar, telling blatantly obvious lies at every opportunity in the face of verifiable evidence.) So it's not fair to say that the horrors of the Iraq War had no impact.

But the willingness of network executives to step in and allow Trump to simply have airtime to spread disinformation points to the continued deeper problem in our society: Ultimately, the media is  controlled by people who benefit financially if Republicans are in charge. If that means that Republicans need to tell lies or spread abhorrent, racist views in order to hold onto power, those who control the media will continue to be inclined toward letting them get away with it.