Marco Rubio goes off after Ted Nugent calls him "the devil" 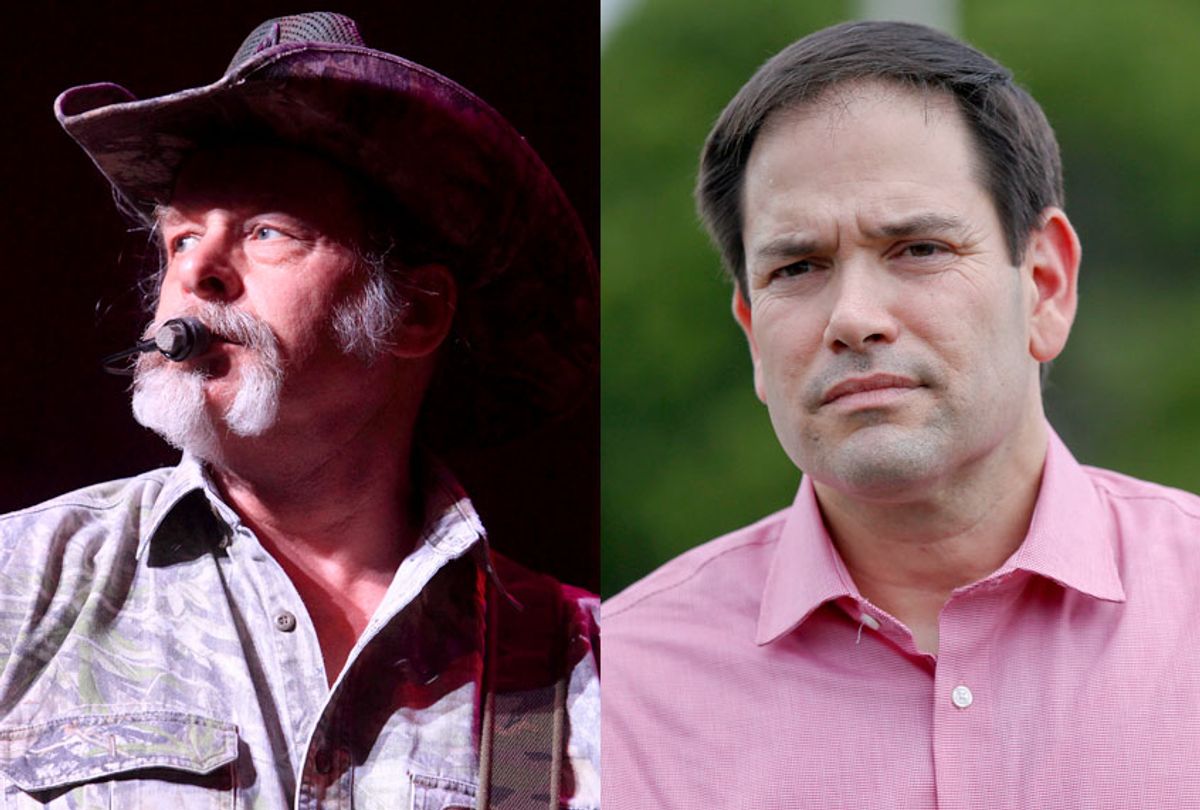 While right-wing rocker Ted Nugent has often butted heads with liberal political figures, he took a swipe at Republican Sen. Marco Rubio of Florida on Monday for the latter's support of a gun control bill.

"Oh sure! Everybody knows that big brother government can be trusted to determine which of us can be trusted," Nugent wrote in a Facebook post on Monday. "Maybe Hillary or Eric holder or James Comey could be in charge of such decision making. Sleep comfortably at night America the devil is in charge."

Not surprisingly, many of the comments responding to Nugent's post were directly or implicitly violent. One user posted, "I’m telling you it’s time for Civil War!!! We the people need to take our country and government back!!!" Another wrote, "I can't speak for anyone else...but I pray they don't push me in a corner with no way out." Still a third claimed, "They've tried before and the PEOPLE killed their asses. I really don't think they want a replay, but if so we can do it again." A fourth one wrote, "It's Gona be expensive..... lots of body bags and caskets needed."

Rubio responded to Nugent's Facebook rant with a series of tweets.

"Ted, I can assure you the Devil had no role in drafting my bill. Here are some facts in thread: 1. Your concern about “Hillary, Holder or Comey” are unnecessary. My bill doesn’t create a federal protection order it’s a grant program for states..." Rubio explained in his first tweet. In his second tweet, Rubio wrote that "2. To get $ state law must meet certain conditions." These included, according to Rubio:

- only family & police can seek Order from court

- giving false testimony to court is a felony; &

Finally, Rubio tweeted that "3. Everyone knew Parkland killer was dangerous well before he acted. If Florida had had this law in place at the time,police could have gone to court & gotten an order to take his guns before he slaughtered those kids & teachers. 3/3"

The proposed law in question is known as a "red flag bill" that would encourage states to make it easier for courts to take guns away from individuals known to be dangerous criminals, according to the South Florida Sun Sentinel. In a prepared statement, Rubio explained that "this idea has already proven successful in states like Florida, and it is my hope that this bill will get all the other states in the country to do the same thing."