Donald Trump: Racist liar, or just a liar who happens to be a racist? 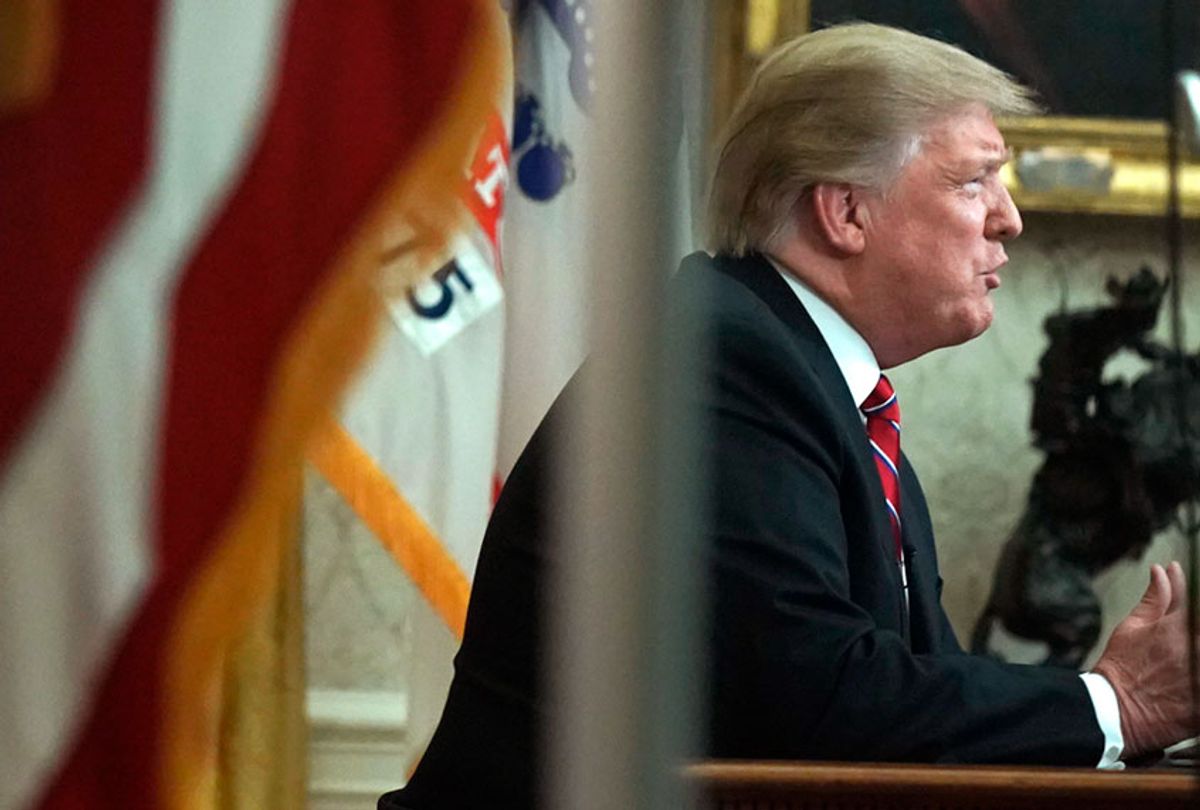 President Donald Trump speaks to the nation in his first-prime address from the Oval Office of the White House on January 8, 2019 in Washington, DC. (Getty/Kevin Dietsch)
--

Racism is based on lies. Lies about biology and group "identity." Lies that some groups are inherently superior to others. Lies that try to link "culture" to DNA and genetics to make claims about "intelligence." Lies that there are distinct and biologically different groups of human beings.

Racism is also a modern invention. It was created in the 15th century by Europeans in order to justify their systematic and global violence against nonwhites.

Trump's speech on Tuesday night on the supposed "national emergency" at the U.S.-Mexico border provides considerable evidence for either claim.

Trump's claim that there is a "crisis" where "illegal aliens," refugees and migrants are overrunning the United States is based on a foundational lie. Trump's presidency is the real national emergency. He has no respect for American democracy or the Constitution. Both public and other evidence has revealed that Donald Trump and his inner circle likely colluded with Russia and Vladimir Putin to steal the 2016 presidential election from the American people.

Donald Trump and his speechwriter and adviser Stephen Miller conveniently omit the fact that most crime in America is intra-racial (meaning white on white, black on black and so on), that white supremacists and other right-wing domestic terrorists kill more police than any other group, and that white men and boys commit a disproportionate amount of mass shootings, especially in schools.

Trump's speech was also grotesque and immoral as he tried to masquerade and conceal his administration's cruelty towards nonwhite immigrants, refugees, and migrants with words such as, “This is a humanitarian crisis. A crisis of the heart, and a crisis of the soul.”

Trump's immorality was also on display with his feigned concern that "illegal immigrants" supposedly take jobs away from African-Americans. In both his private and public life, Donald Trump has repeatedly shown that he has contempt toward black people. White supremacists are existentially incapable of caring about the well-being and humanity of nonwhites -- especially black people.

Thus, there can be no sincere kindness or concern from a president whose prime directive is cruelty and whose stated policy is to destroy the families of nonwhite immigrants and refugees by putting babies and other family members in concentration camps and prisons as a "deterrent."

Immigration, legal and otherwise, is a net economic gain for the United States. "Illegal immigration" from Latin America is at its lowest level in decades.

As he usually does, Trump assaulted both reason and intelligence. It is only the simpleminded, the stupid, the lazy or extreme ideologues who would be suckered in by an analogy that seeks to compare the United States -- a country of 326 million people and thousands of miles of borders -- with a wealthy person's house that has walls for safety and privacy.

Of course Donald Trump lied by blaming the Democrats for a government shutdown that he created, and one he even said, before the television cameras, he would take responsibility for.

To fully understand Donald Trump and the Republican Party's shutdown of the United States government and obsession with building a wall along the U.S.-Mexico border requires an analysis and framework that goes beyond conventional understandings of politics.

There is an emotional transaction between Donald Trump, the Republican Party and their supporters.

Donald Trump has given his "white working class" voters and other supporters -- whom research has repeatedly shown were primarily motivated by racism and nativism (and this is especially true of hostility towards nonwhite immigrants) -- few material benefits. Moreover, Republican economic and social policies have actually made their voters' lives in red state America, for the most part, increasingly miserable and insecure.

What Donald Trump and his party, media and movement have done is to inflame and leverage a feeling of "us" versus "them," of "real" (aka white) Americans versus everyone else, and of the White Tribe being under siege by nonwhites, liberals, Democrats, women, LGBT people and any other group identified as being too cosmopolitan, too forward-thinking, too evolved and too progressive.

The nation is an "imagined community" -- one demarcated by the color line.

In her book "The Monarchy of Fear," philosopher Martha Nussbaum explains:

[P]rojective disgust is prominent in every known society. Some groups targeted for disgust-subordination are racial subgroups, identified by their skin color or other surface features. And we know how a bogus race science was created to sustain the lie that those groups (African Americans, Asians, Native Americans) are really "other," a different species from "us."... Still other groups are found disgusting because they straightforwardly remind the dominant group of their own weakness, their own future.

In any case, we have plenty of evidence now that bias crimes are a large social problem, and that our proclaimed "postracial" era has not yet arrived.

However, my account of disgust, linking it to fear of the stickiness and vulnerability of embodiment, suggests an additional diagnosis for an upsurge of bias. When people feel very insecure, they lash out to blame and scapegoat the vulnerable. We can now add that their tendency to project disgust outward is likely to rise to the extent that their own sense of bodily vulnerability and mortality rises.

This is the root of the emotional transaction between Donald Trump, the Republican Party and their followers: Trump and other Republican leaders will protect white people from an imagined existential threat from nonwhites.

Donald Trump is not the first white conservative to demand that a wall be built to keep "undesirables" out of America.

At a Ku Klux Klan rally in 1924, Georgia Gov. Clifford Walker announced his own plan:

I would build a wall of steel, a wall as high as heaven, against the admission of a single one of those southern Europeans who never thought the thoughts or spoke the language of a democracy in their lives.

Ultimately, Donald Trump's wall, in whatever form it may take, will be a monument to racism and hatred, built upon a pillar of lies.

Although Donald Trump is a profligate liar, he has told the truth he about one thing. He promised to "Make America Great Again" -- but did not say he meant great with hatred, great with meanness.