The more women, the better: Kamala Harris and Elizabeth Warren are in. Who's next?

Warren and Harris are both reportedly running in 2020, with other women waiting in the wings. This is real progress 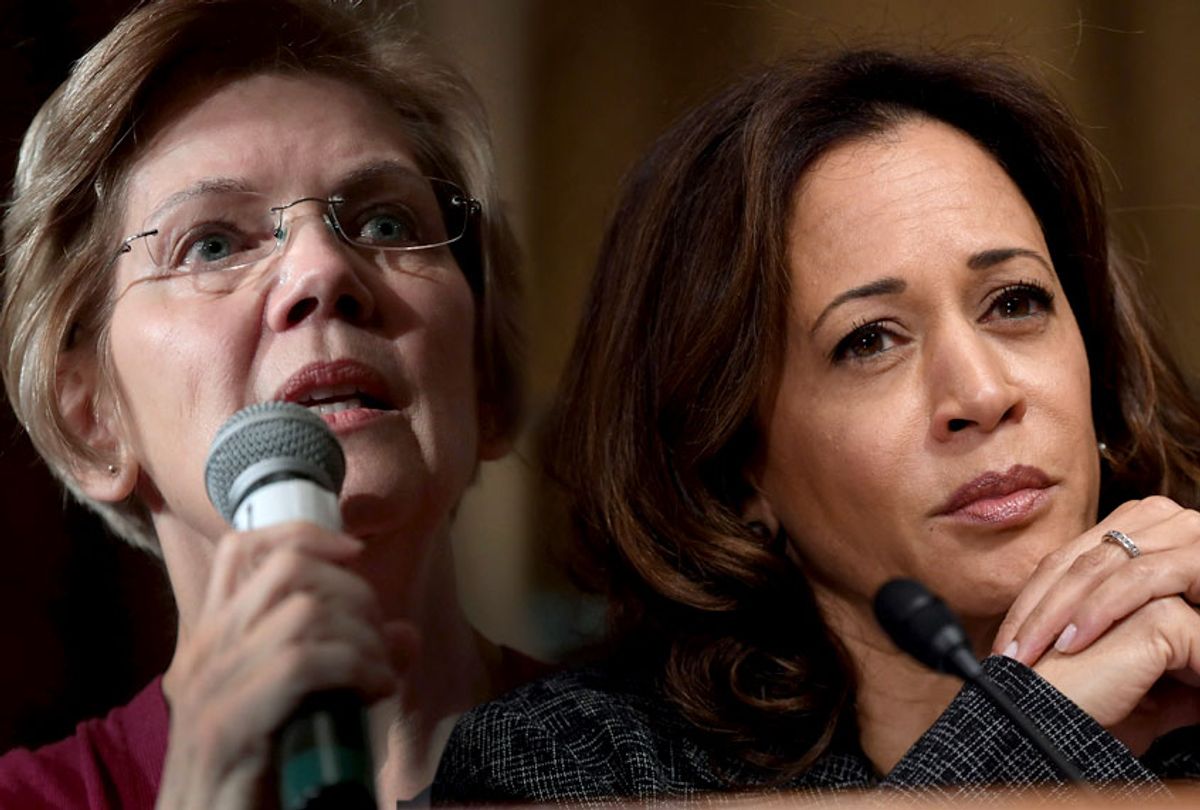 Now there are two women. Or it appears that way, anyway, with a Thursday morning report from KCBS in San Francisco that Sen. Kamala Harris will officially announce her 2020 presidential campaign over the Martin Luther King Jr. holiday weekend, likely at a rally in Oakland. She will join Sen. Elizabeth Warren, who launched a campaign committee last week and has already made a visit to Iowa.

They likely won't be the only ones. Several other women have been floated as potential Democratic presidential candidates, most notably Sen. Amy Klobuchar of Minnesota and Sen. Kirsten Gillibrand of New York.

Having a plural number of female faces on the stage at Democratic primary debates next fall might make some folks itchy in an election season when the need to beat Donald Trump is the prevailing concern. While certain people will deny this to their graves, the ugly fact of the matter is that sexism badly hurt Hillary Clinton's campaign in 2016. Multiple studies have shown that negative attitudes about women's equality pushed a number of voters towards Donald Trump. And while lawyer Michael Avenatti has been the only person bold enough to say it in public, plenty of powerful people in Democratic circles are quietly worried that only a white man can beat Trump in those Midwestern districts that swung the 2016 election.

Sexism is a legitimate concern in 2020, and only a fool would say otherwise. But that's all the more reason for multiple women to run for the Democratic nomination. It's the surest path to get past all the sexism that helped sink Clinton.

For one thing, with multiple women in the race, no single candidate will have the burden of standing in for all women. Clinton suffered from being the repository for all manner of gender anxiety on the part of not just voters but political pundits who were projecting all their hostility about the growing power of women in their lives onto Clinton's 5'4" frame. With several women in the race, it will be easier to see each candidate as an individual, not as a stand-in for an entire gender of humanity, which should  make it easier to judge each candidate on her (or his) merits.

On the flipside, having multiple female candidates will also make it much harder for sexists to hide behind the claim that they oppose a female candidate for individual reasons and not for her gender. In 2016, a lot of people who clearly had some antipathy toward Clinton deflected criticism by claiming they would be happy to vote for some other woman — on the left, Warren's name was typically floated — but not for this particular one.

This time around it will be easier for people to see the sexist patterns, and realize that qualities like "likability" or "shrillness" are being assigned not on individual merits but on gender.

With Warren, we're already seeing how this works. When Politico sent out a tweet asking whether Warren would be "written off as too unlikable" and directly comparing her to Hillary Clinton, it set off a cycle of outrage that explicitly called out the sexism of the likability test. When it was just Clinton, it was easy enough to claim that her "unlikability" was about her as a person, not her gender. But Warren is very different than Clinton in personality and demeanor, making it significantly harder to ignore the unmistakably gendered pattern. The more women get labeled "unlikable,"  the more people will see that the term is sexist and start tuning it out.

Perhaps most importantly, the more women are in the mix, the more it normalizes the idea of female leadership. Clinton spent the entire campaign up against the fact that, for a lot of voters and pundits, her gender meant she simply didn't look "right" in the role. She stuck out like a sore thumb during the primary debates, where she was shorter than the other candidates, more brightly dressed, and oh yeah, female. Even during the Democratic National Convention, after she had eliminated her male competitors, Clinton's presence on the stage accepting the nomination was jarring, as no woman had ever been in that role before.

By putting herself out there, Clinton helped people get more accustomed to the idea of seeing women as powerful leaders and potential presidents. That process will accelerated even more if there are multiple women in the mix during the 2020 primary campaign. The more that voters — and critically, pundits — see a healthy mix of female faces and names on the candidate lists and female bodies on the stage in debates, the less weird it will seem.

To be certain, identity will still matter in the 2020 election. Identity always matters, no matter how much some deny it. But there are hopeful signs that this time around, being female or a person of color will not be nearly the hindrance that it once was, and might well be an asset with voters who are sick of the lack of diversity in political leadership.

Certainly, the results of the 2018 election point in that direction. Women won half of the Democratic primary nominations last year, and in open primary races between a male and female candidate, women actually won 65 percent of the time. Women who ran had twice the primary win rate of men — 46 percent compared to 23 percent. The  Democratic class elected to Congress in November not only includes a record-setting number of women, but also numerous women of color, including the first two Muslim women and Native American women to ever be elected to Congress.

In light of this, it's telling that Harris will reportedly announce her presidential run on MLK Day in Oakland, a choice that highlights her identity as a black woman. Obama's choice in 2007 to announce in the spot where Abraham Lincoln gave his famous "house divided" speech also invoked the nation's fraught history with race, but in a subtler and more distanced way. Harris' choice suggests she believes that voters are less afraid of the issue in 2020, and may actually welcome a focus on racial justice issues.

In the past, conventional wisdom held that identity issues were to be shied away from, not openly embraced, and especially not by candidates who weren't white men. But whether Democrats like it or not, Trump will make identity the central issue in the 2020 campaign, by running, as he did in 2016, an explicitly racist and sexist campaign that promises (at least by strong implication) to preserve white men's death grip on power.

Since Democrats can't run from gender and race issues, they might as well embrace them and hope that voters will welcome candidates who are willing to fight back against bigotry instead of hiding from the issue. Certainly, after the #MeToo movement, the Women's March and the 2018 election, female candidates can go into 2020 knowing they have a newly awakened and energized feminist movement behind them. The more women join the race, the more excited women on the ground will be.