Democrats' investigations get rolling: Mnuchin, Cohen are first with much more to come

At least four House committees are demanding Trump records and official testimony. This will be quite a show 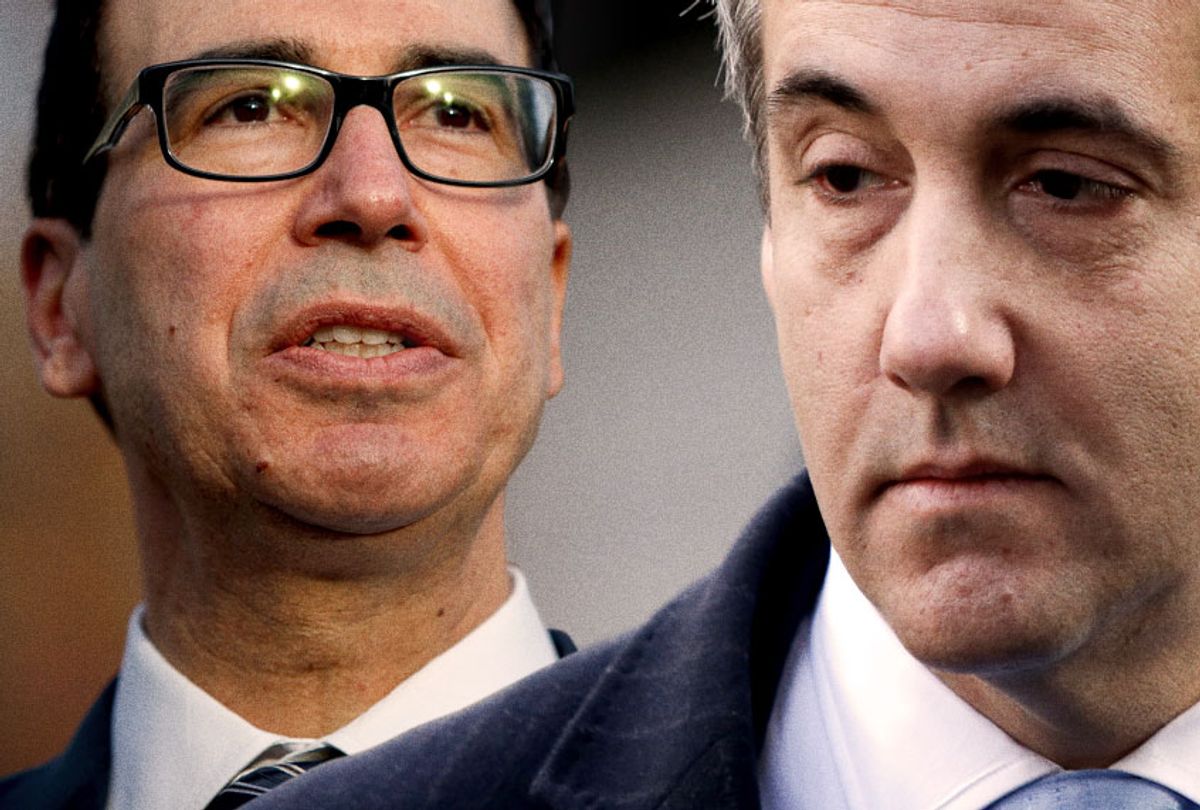 I've been convinced from the moment I heard about this possibility that President Trump would end up declaring a national security emergency in order to start building his border wall. He really has no other way out without causing the right-wing pundits who terrify him to explode. Even if he wanted to compromise with Democrats in Congress, there's nothing the Ann Coulter crowd would allow him to offer that would be worth the wall to the Democrats.

After all, Trump reportedly agreed to a comprehensive compromise in 2017 that included $25 billion for the wall in exchange for legalization of the Dreamers, and it turned out his word was no good and he backed out at the last minute. The people pulling the strings of his base are unwilling to give an inch, so it appears the fake "emergency" declaration is his only option.

The New York Times interviewed one federal worker in Florida who is very disappointed in his performance, which has to have him a bit nervous:

“I voted for him, and he’s the one who’s doing this,” she said of Mr. Trump. “I thought he was going to do good things. He’s not hurting the people he needs to be hurting.”

Trump is apparently taking that deeply disturbing complaint to heart. It was reported yesterday that he plans to make it up to her. After declaring the national security emergency, he will use disaster funds previously designated for people he frequently says don't deserve them:

The Trump administration would use $2.5 billion set aside for reconstruction projects in Puerto Rico, which was ravaged by Hurricane Maria in September 2017. The White House would also tap into $2.4 billion meant for projects in California where floods and wildfires have been a tremendous issue.

This shutdown is poised to become the longest in American history. If one were a true cynic -- or believed that Trump was capable of a complex strategy -- one might be tempted to think the whole thing is designed as a misdirection from what's about to hit this White House like a Mack truck: congressional investigations. The president may not want to face it, but regardless of what happens with this silly border wall and the hardship he's inflicting with this needless shutdown, he no longer controls the narrative.

I wrote earlier this week about the latest news in the Russia investigation coming from a number of different directions. Since then it's been reported that Deputy Attorney General Rod Rosenstein is planning to leave the Department of Justice in a few weeks. Since he'd made it clear that he wanted to see Robert Mueller's investigation of the 2016 election through, that suggested to many legal observers that the case is winding down. We've heard that before, so who knows? But Rosenstein's departure does mean that the status quo is about to change, regardless of whether Mueller's done or not.

Senate Republicans have scheduled the hearings for William Barr, Trump's nominee for attorney general (who will replace the hapless Matt Whitaker, the short-term replacement for Jeff Sessions), for next week. The White House claims Barr won't have time to meet with Democrats on the Judiciary Committee before the hearings because of the shutdown. They managed to squeeze in meetings with Republicans, however, including new committee chairman Lindsey Graham, R-S.C. He assured everyone that in spite of Barr's unseemly audition for the job by trashing the Mueller investigation, he will be completely fair and unbiased. Graham did make one mistake in saying that Barr and Mueller are close personal friends. Trump may not care for that.

But the big action on Capitol Hill is on the Democratic side. And they got off to quite a start yesterday when Treasury Secretary Steve Mnuchin was called to the House up for both a classified briefing and a closed-door hearing for the whole House to explain why in the world he decided to lift sanctions on Russian oligarch Oleg Deripaska's aluminum company practically in the dead of night. (If you haven't been keeping score, Deripaska is a former associate of Paul Manafort, who reportedly owed him a large sum of money.)

We don't know what was said in the classified briefing, but the Democrats were hopping mad about the other one. Apparently Mnuchin was completely unresponsive, reading out a prepared comment and offering up nothing else. Speaker Nancy Pelosi said, "It's stiff competition, mind you, but this was one of the worst briefings we've received from the Trump administration. The secretary barely testified." Mnuchin had better get used to a lot more scrutiny.

But the big bombshell that has to have Trump tossing and turning is the news that his former lawyer, Michael Cohen, will appear before the House Oversight Committee on Feb. 7 to testify about all his tawdry work for the Trump campaign and Trump's business operation. Committee chair Rep. Elijah Cummings, D-Md., said he would consult with the special counsel's office to be sure they were not interfering with any ongoing investigations. This will be the first big public hearing on these matters since James Comey testified back in June of 2017. Intelligence Committee chair Rep. Adam Schiff, D-Calif., also announced that he would ask Cohen to appear before his committee in closed session to testify further about the Russia investigation.

But there's a lot more where that came from. The House Judiciary Committee plans going to call Acting Attorney General Whitaker for a public hearing right off the bat, issuing him a subpoena if necessary, to testify about what happened with the firing of former Attorney General Jeff Sessions and his oversight of the special counsel investigation. They will also likely want to talk to Cohen about those hush money payments and his involvement with the White House in preparing the perjurious testimony for which he has since pleaded guilty.

Schiff's committee plans to start demanding financial records dealing with Trump and foreign banks and companies, real estate dealings with foreign nationals and other areas of inquiry likely to be unpleasant for the president. Cummings has sent out 51 letters to various agencies demanding documents pertaining to everything from hurricane response to all the corrupt practices of Trump's various Cabinet officials over the last two years. He's also laying the groundwork for a thorough probe into Trump's self-dealing and his possible violations of the Constitution's famous "emoluments clause." Finance Committee chair Rep. Maxine Waters, D-Calif., will almost certainly demand Trump's tax returns, although the legal status of such a request is not clear.

Trump will undoubtedly continue to try to dominate the news cycle with his illiterate tweets and erratic behavior, but the truth is that his act is getting a little stale. There's a new production in town and the previews look like it's going to be quite a show.