Is Donald Trump a Russian agent, or the victim of a Deep State Witch Hunt? Sure! 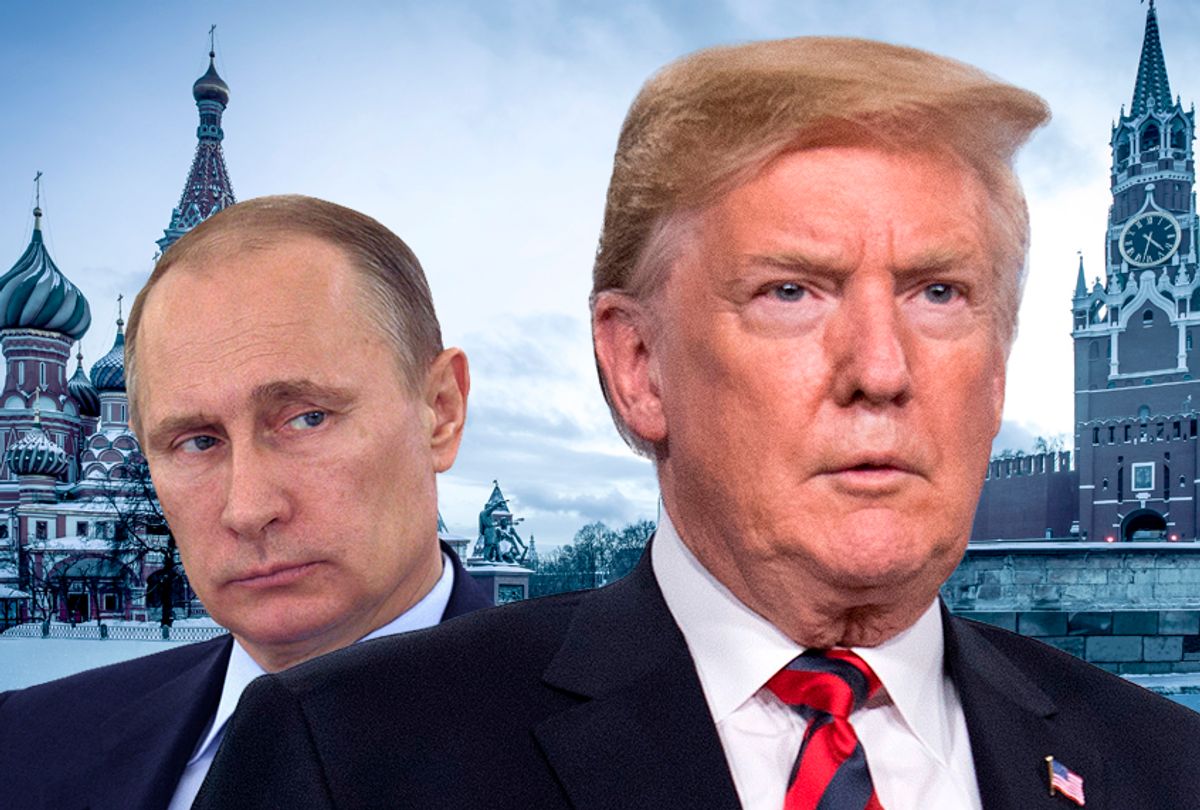 On Friday afternoon, the New York Times dropped what appears to be the closest thing to a smoking gun in the tortuous saga of the “Russia investigation.” I think it is wise to tread carefully here, given our universe of fact-free spin: There’s a long list of things we don’t know about Donald Trump and his Russian connections, and to some degree this explosive Times story only makes the list longer. But these revelations seem to add at least some substance to the most outlandish rumors that have floated around Trump since well before he was elected president.

In May 2017, four months after Trump took office, the FBI reportedly launched a counterintelligence investigation of the president himself, aimed at discovering whether the president was either a Russian agent or a Russian “asset” — in the language of the Times report, whether he was actively “working on behalf of Russia against American interests” or “had unwittingly fallen under Moscow’s influence.” This is both an extraordinary turn of events by any standard and, as Times reporter Adam Goldman told the New Yorker’s Isaac Chotiner, something of “a ‘duh’ story.”

This is new information in a couple of ways. (If it’s true, that is. So far no meaningful denials have come from either the FBI or the Justice Department, but the Times has been had before.) It’s well understood that the FBI began a counterintelligence investigation of Trump’s presidential campaign as early as the summer of 2016, not long after the notorious Trump Tower meeting between Donald Trump Jr., Paul Manafort, Jared Kushner and Russian lawyer Natalia Veselnitskaya.

It’s equally clear that after Trump fired FBI director James Comey in May 2017, giving multiple contradictory explanations for doing so, the bureau began investigating the president for possible obstruction of justice, a probe that soon led to Deputy Attorney General Rod Rosenstein’s appointment of special counsel Robert Mueller. Rosenstein remains a strange character in this drama: He evidently did Trump’s bidding on the Comey firing, then felt used and abused and ever since has managed the investigation that has gnawed away at Trump’s presidency, partly because of events in which Rosenstein himself was instrumental. (It’s not facetious to wonder why he didn’t recuse himself, as former Attorney General Jeff Sessions had earlier done.)

Based on the visible evidence, it did not appear that those two investigative strands overlapped in any significant way. At least not until now. There were the puzzling and dubious interactions between Trump campaign officials — Manafort, Kushner, Michael Flynn, Jeff Sessions, Carter Page and George Papadopoulos, at least — and various people close to the Russian government. There was the president’s peculiar conduct around the Comey firing, and his evident desire to shut down the FBI’s investigation of those unexplained Russian contacts. Obviously the events in category A led to those in category B, but they did not appear intimately interconnected.

That is now open to doubt. As Benjamin Wittes of Lawfare explains in a highly useful post, most students of the Trump-Russia investigation assumed that Mueller’s probe was operating “on at least two separate tracks,” those being campaign collusion and subsequent obstruction of justice. But maybe both tracks were the same track all along, Wittes suggests: “What if the obstruction was the collusion — or at least a part of it?”

Andrew Prokop of Vox summarizes that argument by suggesting that the FBI began to wonder whether Trump’s efforts to pressure Comey into dropping the Flynn investigation, and then the president's firing of Comey when he wouldn’t follow orders, weren’t just “an effort to obstruct justice” but more specifically “part of an effort to obstruct justice to Russia’s benefit.” (Emphasis in original.)

So in what sense can the news that the sitting president of the United States was (and likely still is) under investigation as a possible foreign agent — something without any precedent I can perceive, in the modern history of any major nation — be “a ‘duh’ story”? Well, partly because all along this has been the “$64,000 question,” as Times reporter Goldman says in his New Yorker interview: “Is Trump working with Russia?” And partly because we still have no evidence of a clear answer to the question, and no indication we will ever have a clear answer to the question, a dispiriting fact that cannot be mentioned often enough.

As I said earlier, this cloud has hung over Trump since well before he descended the golden elevator in June 2015 to announce his presidential candidacy. It just didn’t matter all that much. Investigative reporter Craig Unger, author and researcher Seth Abramson and former U.S. intelligence officer Malcolm Nance have all argued that Trump was likely compromised by the Russians years or decades ago, although their accounts of how that happened differ and none of them, to borrow the contemporary idiom, has the receipts. (Indeed, to a large degree the "Trump is a traitor" industry relies on those people and others recycling the same sets of ambiguous evidence with slightly different emphasis.)

Rep. Kevin McCarthy, the California Republican who is now House minority leader and a staunch Trump ally, infamously told his colleagues before an open mic in June of 2016, “There’s two people I think Putin pays: [Dana] Rohrabacher and Trump.” (Rohrabacher, a known Putin fan, was among the numerous House Republicans defeated last November.) When his fellow Republicans laughed, McCarthy said, “Swear to God,” before then-Speaker Paul Ryan shut him up: “No leaks. … This is how we know we’re a real family here.”

What can we even say about that episode, which looks ever more sinister and ludicrous in the rear-view mirror? As with the collection of tantalizing clues and salacious rumors known as the “Steele dossier,” no one can say how deep the water really goes. Are we dealing with what might be called the normal level of graft and corruption associated with the international business career of a mid-level huckster — as has always been my presumption, to come clean — or something closer to “The Manchurian Candidate,” perhaps the most brilliant and brazen espionage operation ever conducted?

Over and above all that, perhaps, is the undeniable fact that facts themselves — or at least any and all facts within the penumbra of Donald J. Trump — have become so distorted, so misunderstood and so polarizing that they are no longer recognizable as facts at all. Trump is often derided by his enemies as an illiterate nincompoop afflicted by a narcissistic personality disorder, and the shoe appears to fit. But he has been highly successful in reframing all the investigations into his business, his campaign and his presidency as political warfare conducted by other means. His supporters, I have no doubt, will see all this as standard-issue Deep State smoke and mirrors, the same as it ever was.

In fact, the president’s campaign to depict the FBI as a corrupt institution loaded with Hillary Clinton stooges takes on a whole new relevance in the aftermath of Friday’s Times report. As Trump’s mocking tweetstorm on Saturday pointed out, the visible leading figures in the FBI’s reported counterintelligence investigation of him are the same people he drove out of the agency: “Lyin’ James Comey, Andrew McCabe, Peter S and his lover, agent Lisa Page, & more, all disgraced and/or fired and caught in the act. These are just some of the losers that tried to do a number on your President. Part of the Witch Hunt.”

As is so often the case, Trump has a point, in reverse-image Alice in Wonderland fashion. It was of course Comey who launched the initial investigation of the Trump campaign in 2016, and it can only have been McCabe — who served as acting FBI director after Comey’s dismissal — who approved the counterintelligence probe in May 2017 that fed into the Mueller investigation. Peter Strzok is not actually mentioned in the Times report, but Page (a civilian FBI lawyer, not an agent) is quoted offering important testimony to Congress. (I feel confident in assuming that this material was leaked to the Times by the new Democratic leadership of the House Intelligence Committee.)

Who gave the green light to this explosive investigation at a higher level in the Justice Department? We don’t know that, but it presumably wasn’t Sessions (who had already recused himself from Russia-related matters) and was most likely Rosenstein, whose long-term survival at DOJ -- at least "long" in relative terms -- can only be viewed as an inexplicable mystery. My point is that everybody seemingly involved with this investigation, with the semi-demi-quasi-exception of Rosenstein (but really him too), is already on the list of confirmed Trump villains.

To people like you and me, that looks pretty damn incriminating for the president — he demonized and fired all those people because he knew they had dirt on him, or were at least looking for it — but of course to Trump devotees it’s exactly the other way around. These were “the corrupt former leaders of the FBI, almost all fired or forced to leave the agency for some very bad reasons,” to quote another Saturday tweet from Dear Leader. Naturally this cabal of Witch Hunters, who had no doubt sworn a blood oath when joining the Obama-Hillary cult, were out to blacken the name of the greatest president ever.

So the closest I can come to a measured analysis is that this is big news that confirms much of what we’ve suspected all along — and that barely changes the calculus of the Trump presidency, if it does at all. Almost everybody knows what they think, and they still think it now. Will the “principled” or “moderate” or “mainstream” Republicans so coveted by the media suddenly start rushing for the lifeboats, seeking a way off the USS Donald Trump? I have pondered that deep and important question and come up with: Nah. I mean, it's pretty damn late for that, isn’t it? Two years ago, Kevin McCarthy and Paul Ryan and their boys thought it was true or plausible or at least conceivable that Trump was actually employed by Vladimir Putin, and made clear that they didn’t much care. Nothing about that is different today.