The social cohesion for a general strike supporting federal workers is part of America’s past, how about now? 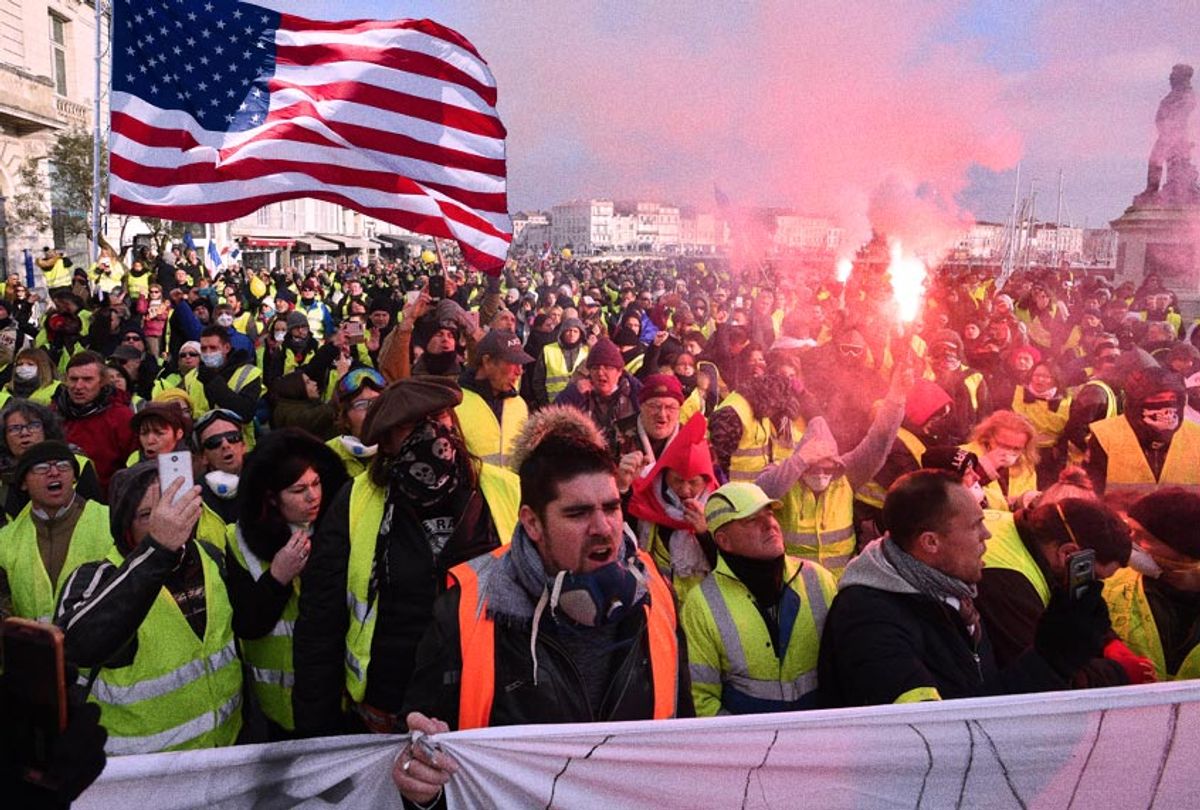 People march on January 5, 2019 in La Rochelle during a demonstration called by the yellow vests (gilets jaunes) movement. (Getty/Photo Montage by Salon)
--

It is hard to understate the utter disdain and contempt being shown by President Donald Trump toward the 800,000 federal workers whose lives he has upended with the government shutdown.

That 400,000 of them have to continue to work without pay, because they are deemed essential, reduces them to a form of serfdom which  really amounts to a massive abuse of human rights.

The fact that 40 percent of them are veterans just adds to the injustice and indignity they’ve suffered at the hands of an out of control tyrant who came into office pledging to dismantle the federal government and is doing that with the help of industry players he’s placed in top positions to help him do it.

The corporate news media, PBS, NPR, et al., are playing this as a two-dimensional political game starring an unhinged Trump and a newly invigorated Democratic Congress with the furloughed federal workers as just extras “who will get paid anyway.”

Make no mistake: Such a wholesale abuse of workers has much broader implications for the entire nation, where for decades capital (money) has been kicking labor’s ass -- as our grotesque income and wealth concentration so amply documents. There’s a direct connection to this unconscionable abuse of federal workers and everybody else who survives based on the wages they earn each day.

The government sets the bar as an employer. Every time it violates laws like the 1938 Fair Labor Standards Act, which requires workers be paid the minimum  wage and overtime, it sets a precedent that puts all workers at peril.

With the explosion of the “gig” economy, the raid by owners on their employees’ pensions, and a national workforce that became increasingly part-time without benefits, Americans were beaten into submission  to believe they were even lucky to have any  job.

And make no mistake about it, the vulture capitalist’s attack dogs like former Governors Scott Walker and Chris Christie, exploited this growing American worker anxiety to try and humiliate and denigrate public workers — including teachers — in their states who, because they had union representation, still had benefits at all.

It was Walker and Christie that perfected the GOP playbook of pitting public and private sector workers against each other while they showered hundreds of millions of dollars in government largesse on their donors under the cover of “economic development.”

This Republican attack on organized labor is part of the party’s DNA. And, while President Obama had a “bromance” with the Reagan presidency, Reagan’s 1981 mass firing of 11,000 air traffic controllers who belonged to the Professional Air Traffic Controllers Organization set labor back several decades.

Reagan’s breaking the PATCO strike set the stage for a second robber barons’ gilded age when capital would dictate the terms and conditions of employment and workers were reduced to waiting by their phone on pins and needles praying the sunrise would bring the chance they might work that day.

American workers have been seduced and then subjugated  by mass consumer capitalism that replaced good wages and benefits with consumer debt.  From cradle to grave they have been harnessed into a “debt” mule train like the one  that was the trademark of the Borax soap that as an actor Reagan hawked on TV. Think what a great social control mechanism the $1.5 trillion dollar college debt yoke is on our young people.

How can you dare challenge the established order, no matter how abusive and oppressive, when at your so-called “emancipation”  you are shackled to a debt load you won’t be able to pay back ever?

We live in a culture where we usually keep our economic anxieties and tribulations to ourselves, no matter how bad they get, which only empowers those systems that profit off our isolation and exploitation.

It’s a form of self-shaming because we have internalized the propaganda of our consumer driven media that we only have ourselves to blame  for our circumstance.

As Alissa Quart , author of the seminal work “Squeezed: Why Our Families Can’t Afford America”, pointed out in a recent New York Times article it is this internal shaming that is a roadblock to our individual empowerment that sets the stage for direct action that can produce radical social transformation.

“One of the first challenges is getting people to admit they are struggling financially, and to talk publicly about it,” she writes. “This can be hard for members of the middle class, a group that has a real sense of stigma about financial floundering. They are hobbled by a long-held obsession with privacy and don’t always acknowledge what is troubling them, according to research by Caitlin Zaloom, an anthropologist at New York University.”

In our debased state as debt slaves, with tens of millions of us struggling week to week to make ends meet, its hard to see any vestige of the courage possessed by our Revolutionary War ancestors who put everything at risk to fight off the tyranny of a distant monarch who at the time ruled a global empire.

Those were long odds.

If this Trump shutdown had happened, say in France, where there is some residual social cohesion, there would have already been a national general strike in support of these workers.

For decades Americans had that muscle of collective action and their children and grandchildren benefited.

From the end of slavery and child labor to the very concept of the weekend itself, these advances in our circumstance were the fruits of bitter, often violent struggle.

But our ancestors took this on because a sufficient number of them loved and cared for each other enough that knew their fates on this earthly plain were surely all interconnected.

How long could Trump’s tyranny stand if all of working America stood up to this gold-plated bully?